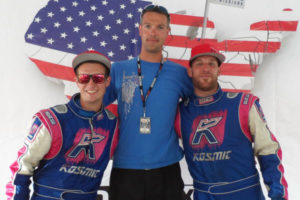 SOUTH BEND, INDIANA (August 21, 2012) – From the start of the year, one major goal for the Rolison Performance Group was to help a driver achieve a national championship and ticket to the Rotax Grand Finals. That task was achieved and doubled following the events that unfolded at the 2012 United States Rotax Max Challenge Grand Nationals, held at the Michiana Raceway Park in South Bend, Indiana. DD2 pilot Joey Wimsett swept the action during the August 8-11 event to secure his second trip to the ‘Olympics of Karting’ while Johnny Blair triumphed in the Masters Max category, also earning a ticket to the coveted world Rotax championship.

Wimsett, who also acts as a driver coach for the Rolison Performance Group, piloted an RPG-prepared Kosmic entry in his first time competing in the two-speed category. The lack of track time in the DD2 package was not visible, as Wimsett dominated the entire event. Quickest in official practice, Wimsett cleared the field by nearly three-tenths of a second in wet conditions. Still under wet conditions, Wimsett began wheel-to-wheel action leading all 14 laps in the rain for a six-second win. The second heat was a challenge as the conditions brought out the slick tires, yet a small dropping of rain during the opening lap caught Joey and a number of competitors’ off-guard. He lost the lead and a number of positions, but grabbed them right back to go on for the win. Wimsett would go on to score the win in heat three as well, leading all 14 laps. Saturday brought on the Prefinal and Final, both in complete opposite conditions. The scheduled 20-lap Prefinal was cut short to 15 as the rain fell it’s hardest all week. Wimsett navigated his DD2 machine with complete control, scoring the win and leading each lap. Clear skies and a dry track presented itself for the DD2 main event, and Joey dominated for the final time. Leading the entire 26 laps, Wimsett secured his first DD2 Rotax Grand Nationals title, and a second trip to the Rotax Grand Finals as part of Team USA.

Blair made his first Rotax Grand Nationals start in the Masters Max category and was a contender from the beginning. Leading the way in the official practice session in the dry, Blair was fourth after the wet qualifying session. Getting shuffled back at the start of the opening heat, Johnny ended up finishing ninth. With a new day on Friday for the final two heat races, Blair drove to third in heat two, recording the fast lap of the race, and second in heat three. The results placed him third on the grid for the Prefinal. Wet conditions returned and Blair was ready. Taking over the lead on lap two, Johnny was untouchable in his Tony Kart driving away to a 12-second win. Dry weather returned for the main event and Blair maintained the lead throughout. The Washington driver posted the fast lap once again, en route to a nine-second victory. The title is Blair’s first at the Rotax Grand Nationals and he will be a rookie member of Team USA at the Rotax Grand Finals, competing in the Masters Max category.

RPG Senior Max drivers Joe Criscione and Kyle Byers battled through a grueling week to end up finishing inside the top-10 against a very competitive 50 driver field. The duo qualified 19th and 20th respectively, running in the fast group. Each recorded one bad heat race result, putting Byers 26th and Criscione 28th for the Prefinal grid. Both were able to avoid any opening lap carnage and advanced into the top-20. Byers finished 13th while Criscione ended up 16th. They continued to gain positions in the main event, avoiding any incident in the opening lap. Their consistent pace put them just outside the top-10 by the midpoint of the 26-lap event. In the closing laps, both were able to advance even further up the order. Byers ended up in seventh position while Criscione placed 10th. Both results are very respectable for the young drivers piloting RPG Kosmic karts.

Also adding another top-10 finish from the US Rotax Grand Nationals for Rolison Performance Group was Junior Max driver Luke Selliken and Masters Max driver Justin Peck. The Oregon driver was a contender early on, qualifying inside the top-12 of the 50-driver field. Two top-five finishes in the heat race, along with a DNF after contact during one of the rain races, placed Luke in the 13th position for the Prefinal. He retained the position after falling back to 20th at the start of the 20-lap event. Once again a victim of an opening lap incident, Selliken lost a number of positions at the start of the main event, charging forward in his RPG-Kosmic to finish an impressive 10th place, improving 12 positions from a year ago. Fellow Junior driver McKay Snow also drove strong throughout the event, placing 19th in the main event. After a slower than excepted result in qualifying, the Utah pilot earned respectable results in the heat races to end up 15th. Battling back from an incident in the Prefinal, Snow capped off the event with a drive back into the top-20. Peck made his second start at the Rotax Grand Nationals, improving on his 22nd-place finish a year ago to end up ninth in the hotly contest Masters category. The Utah driver stayed out of trouble during the heat rounds, ending up 11th going into the Prefinal. Holding the position through the 20-lap run, he would fall to the tail of the field at the start of the main event. Fighting back, Peck would survive and finish ninth.

A third title was just on the horizon for Rolison Performance Group with Mini Max driver Sting Ray Robb. The Idaho driver with Blake Choquer from BBR working as his chief mechanic, advanced his Tony Kart machine in the heat races to line up fifth for the Prefinal. Continuing forward, Robb finished second in the run to earn a front row starting position for the main event. Sting Ray was engaged in a six-kart battle at the front when on lap 12, contact was made and Robb was sent into the crash pillows. While he escaped with no injuries, his race was over too early. Utah driver Sean Groenstein joined Robb in Mini Max, piloting his CRG machine to 25th in his first race under the Rolison Performance Group tent. Sophia Price and Jacob Blue Hudson rounded out the RPG tent in South Bend, contesting the Micro Max division. Sophia improved on her 14th-place finish in 2011 to end up 11th Saturday. Hudson, the Gatorz Challenge of the Americas 2012 champion, placed 13th.

Rolison Performance Group currently has spots open for arrive-and-drive opportunities for the Rotax Pan American Challenge at The Track in Centennial, Colorado on September 20-23, where drivers from the USA and outside the United States are invited to compete at for tickets to the Rotax Grand Finals. To learn more about the Rolison Performance Group, visit www.rolisonperformancegroup.com for more about their services and products available or find them at www.facebook.com/RolisonPerformanceGroup