SOUTH BEND, INDIANA (August 7, 2012) – The successful Rolison Performance Group race team has settled in at the Michiana Raceway Park for the 12th running of the United States Rotax Max Challenge Grand Nationals. The facility – located just outside the South Bend, Indiana city limits – will welcome Rotax drivers from across the country to compete for national titles and positions on the coveted Team USA squad to compete at the Rotax Grand Finals, held this year in Portimao, Portugal. A total of 12 drivers in six categories will represent the RPG team to their fullest ability in hopes of recording personal bests at the Rotax Grand Nationals.

A stout roster will represent Rolison Performance Group in the Senior category, both hailing from the Northwest Gold Cup series. Kyle Byers has been fast in his limited USRMC schedule this season. Last year, Byers was a top-10 contender, just slipping back to the 13th position. The goal this year is to secure a position inside the top-10, with hopes of an even better finish aboard his RPG-prepared Kosmic. Joe Criscione is also making his first Rotax Grand Nationals and has been improving throughout the season. A second place finish at the latest Gold Cup event has the momentum moving in the right direction for Criscione as he will battle the best this week in South Bend. 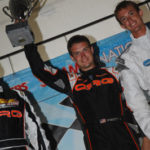 RPG driver/coach Joey Wimsett will attempt to earn his second trip to the Rotax Grand Finals, this time in DD2 (Photo: On Track Promotions)

No stranger to battling the best, Rolison Performance Group driver/coach Joey Wimsett returns to the seat this week looking to earn his second trip to the Rotax Grand Finals. Wimsett earned a spot on Team USA in 2009 with a runner-up finish in the Senior Max category in Oklahoma. This year, Joey is gunning for the DD2 title under the Rolison Performance Group tent. Masters Max driver Justin Peck will be making his second start at the Rotax Grand Nationals after working with the RPG crew all season long. Peck finished sixth in the Gatorz Challenge of the Americas series this past winter and is looking to improve on his 22nd place performance at last year’s event. Jonny Blair is the current Senior Max championship leader in the NWGC series that sees over 20 regular competitors each weekend. Blair will take on the Masters Max group this week, making his first start at the Rotax Grand Nationals under the guidance of Rolison and the RPG crew. 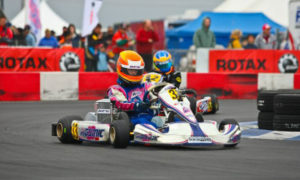 Rolison Performance Group is entering this year’s Rotax Grand Nationals with a stout Junior driver roster. Leading the Junior Max group is rising star Luke Selliken. The RGP Kosmic driver was the top American in the Gatorz Challenge of the Americas Junior Max standings – winning two races in one weekend, and is the current point leader in the Superkarts! USA Pro Tour TaG Junior championship. Finishing just outside the top-20 at last year’s Grand Nationals, the work Luke and Rolison have done over the past 12 months will pay off this week with a bid to the Rotax Grand Finals. Another driver making their first Rotax Grand Nationals start is Laura Shearer. The young pilot has worked with the RPG group all season in preparation for the event and recording the best finish possible. Rounding out the Junior Max group is rookie McKay Snow. The Utah driver competed in the Mini Max division last season and will make his first Junior start at the Rotax Grand Nationals. Snow finished the Gatorz Challenge of the Americas championship standings in tenth, piloting a RPG Kosmic.

Sting Ray Robb is set to battle for the Mini Max title this week. Robb has spent some time with RPG recently, taking part in the team test in South Bend in June. Sting Ray will look to improve his 20th place finish from a year ago in his second Grand Nationals Mini Max start. Joining him under the RPG tent will be Utah driver Sean Groenstein. The young pilot is making the transition from Micro Max to Mini Max this season, competing in his first event with the Rolison Performance Group. Sean has visited the Michiana Raceway Park previously, so the transition should go quickly for the young driver. The top two drivers from the Gatorz Challenge of the Americas Micro Max class will be in South Bend under the RPG tent. Jacob Blue Hudson and Sophia Price scored combined four wins this winter, finishing 1-2 in the championship chase. Hudson is using the ticket earned from the title to compete this week.

To learn more about the Rolison Performance Group, visit www.rolisonperformancegroup.com for more about their services and products available or find them at www.facebook.com/RolisonPerformanceGroup

Rolison Performance Group is a leading race team and prep shop in American karting, and is also a Rotax Service Center and a Kosmic chassis dealer.  Owner Mike Rolison, known as ‘Roli’ at the racetrack, has built a career coaching some of the best kart racers on the West Coast. Over the past decade, he has helped 100’s of drivers and mechanics improve their craft. Mike brings world class driving and coaching experience to every racer he works with. Whether you are competing on the local, regional, national or world stage Roli’s driving and tuning instruction will improve your abilities and results.  RPG provides trackside support and arrive-and-drive programs for many series, including the Challenge of the Americas, US Rotax Grand Nationals, Pan-American Challenge, SKUSA Pro Tour, Northwest ProKart Challenge and the SKUSA SuperNationals.  The team is a Kosmic chassis and product line dealer and is proud to campaign karts on the regional and national stage. Bookmark www.rolisonperformancegroup.com today.