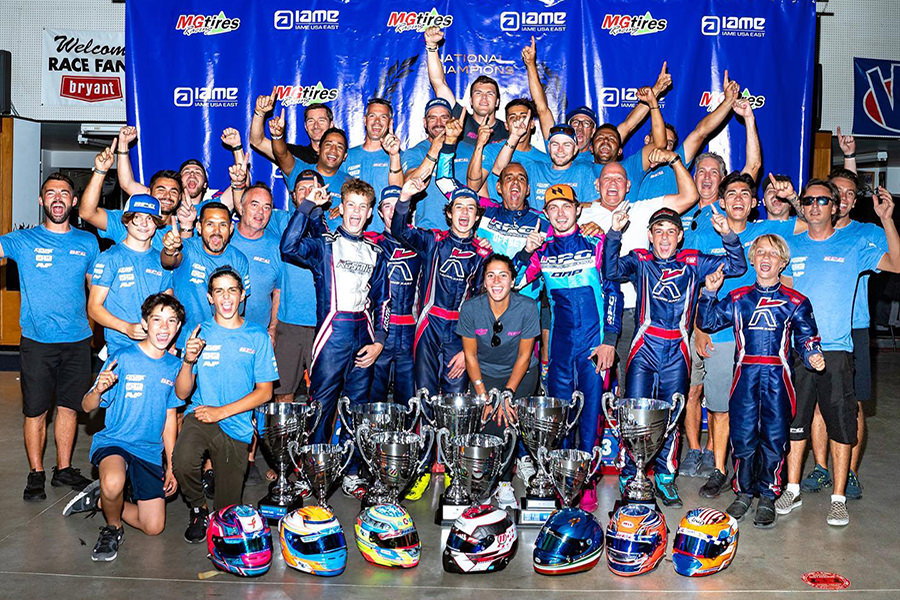 The final weekend of the United States Pro Kart Series brought Rolison Performance Group to New Castle, Indiana, and one of the most beloved tracks in North America, New Castle Motorsports Park. The circuit has laid host to many RPG wins and podiums in the past, and with championships up for grabs in multiple categories, the stakes were high going into the September 15-18 weekend. With 26 Kosmic karts under the tent for the weekend, RPG drivers came out in force after a long and successful 2022 racing in the USPKS. 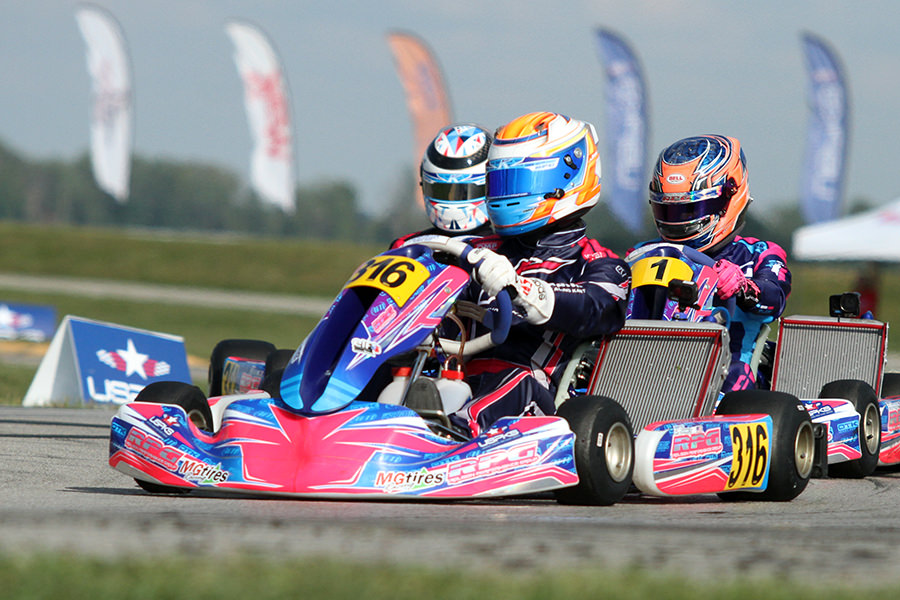 Hayden Jones drove to two victories in the X30 Pro division, taking home $5,000 on the weekend and giving RPG a sweep on the season in the class (Photo: eKartingNews.com)

Hayden Jones stole the show on both days in X30 Pro, taking both round victories in the hotly contested class of the weekend while Ryan Norberg secured his second straight USPKS championship by clinching the title on Saturday. Jones along with Norberg, Nate Cicero and Donovan Bonilla battled it out all of Saturday for supremacy, with all four having the pace to win. Norberg came home second, Cicero fourth and Bonilla seventh for the day. Sunday would again see Jones up front, but Cicero had found pace overnight and was the kart to beat, taking the Prefinal win. While leading the Final on Sunday, Cicero had suffered a broken bumper bolt and was flagged off the track, unable to finish the race. That handed off the top duties over to Jones, who led from then on for a second straight victory and also locked up second place in the final championship standings. Norberg, after getting collected in an incident during the Prefinal, made his way up the field to finish fourth, gaining 21 spots along the way. Bonilla also had a rough go in the Prefinal and came back from 26th to finish eighth. Wes Duchak showed front running pace throughout the weekend, even though 17th and 20th place finishes may not show it. Grace Hemmerde had a great run for her debut in the X30 Pro class, finishing 19th on Saturday however was unable to reach the checkered flag on Sunday. 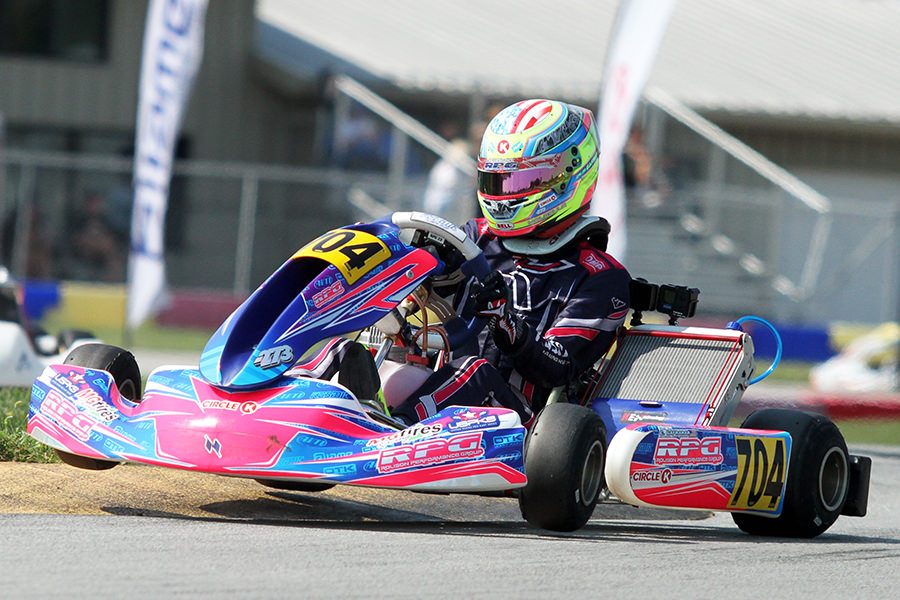 Caleb Gafrarar drove to three victories at the USPKS finale, helping to secure the championship in X30 Junior (Photo: eKartingNews.com)

RPG Junior driver Caleb Gafrarar swept the main events on the weekend in X30 Junior, highlighted by a last-to-first performance in Saturday’s Final. Those results along with other stand-out drives during the season meant Gafrarar had done enough to win the series championship for 2022. Ernesto Rivera earned his spot on the second step of the podium on Saturday, however, slipped a bit on Sunday to end up ninth. Max Taylor made it three RPG drivers to podium in the class on the weekend with his third-place finish on Sunday, which was proceeded by a seventh-place result on Saturday. Teddy Musella had a consistent run over the course of the weekend, scoring sixth on Saturday and breaking into the top-five on Sunday, finishing fifth. Those results helped to promote him to fourth in the final point standings on the year. Emma Kate Scarbrough couldn’t get luck on her side on Saturday and ended up in 23rd, but was able to turn it around for Sunday, getting into the top-15, placing 14th.

Seven drivers under the RPG tent competed in the KA100 Junior class on the weekend, with a handful of them competing for wins. Caleb Gafrarar led the charge both days, as he and Ernesto Rivera came out of Saturday’s races fourth and fifth, but with more to be desired. Max Taylor, after finishing 15th the day before, started his Sunday off with a pole position in qualifying and started the Prefinal with Rivera alongside on the front row. The Prefinal would go the way of Rivera, and come the final, Gafrarar stepped up as the top contender, scoring the victory with Rivera second and Taylor fifth. Emma Kate Scarbrough had strong pace all weekend but never had the luck to show it, finishing 33rd on Saturday and a DNF Sunday. Lillian Scarbrough made her debut in the category, moving up from Cadet, with Diego Mendeztorres and Gavin Wardle all finishing outside the top-30 both days in what were great learning days against a field of 50 drivers. Gafrarar finished the season with three wins on the season, placing third in the championship chase. 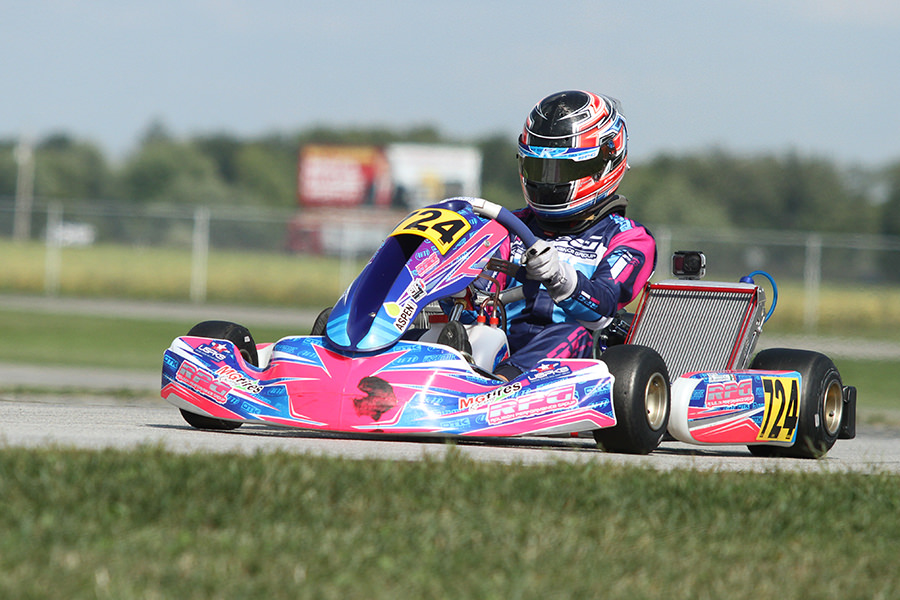 Ernesto Rivera earned his first runner-up finish of the season in both X30 Junior and KA100 Junior at New Castle (Photo: eKartingNews.com)

In the always entertaining X30 Masters group, RPG drivers Mario Barrios, Danny Robertson and Robert Maier fought hard to break into the top-five all weekend, and bring home some solid top-10 finishes along the way. Barrios was looking at a runner-up finish in Saturday’s Final, however, received a bumper penalty putting him down to sixth, the same place he would finish Sunday. Danny Robertson finished both days in the top-10, with a best of seventh on Saturday and one back for Sunday in eighth. Both drivers finished the year on the championship podium with Barrios in the second spot and Robertson fifth to close out the year. Robert Maier came so close to a top-10 on Saturday, finishing 11th, and 12th on Sunday.

RPG drivers Chase Hand and Gia Cicero had a hard-fought weekend in KA100 Senior, with the pair of them both showing race winning pace at times, but never had the luck to truly show it. Hand, after P7 in qualifying on Saturday, got his Kosmic kart up to fourth in the Prefinal, and Cicero just outside the top 10. Unfortunately, both drivers would retire from the Final due to contact. The luck never came back from Saturday morning, with Hand finishing in 23rd on Sunday and Cicero right behind in 24th. In the end, Chase was able to secure the fifth position in the championship standings for 2022. 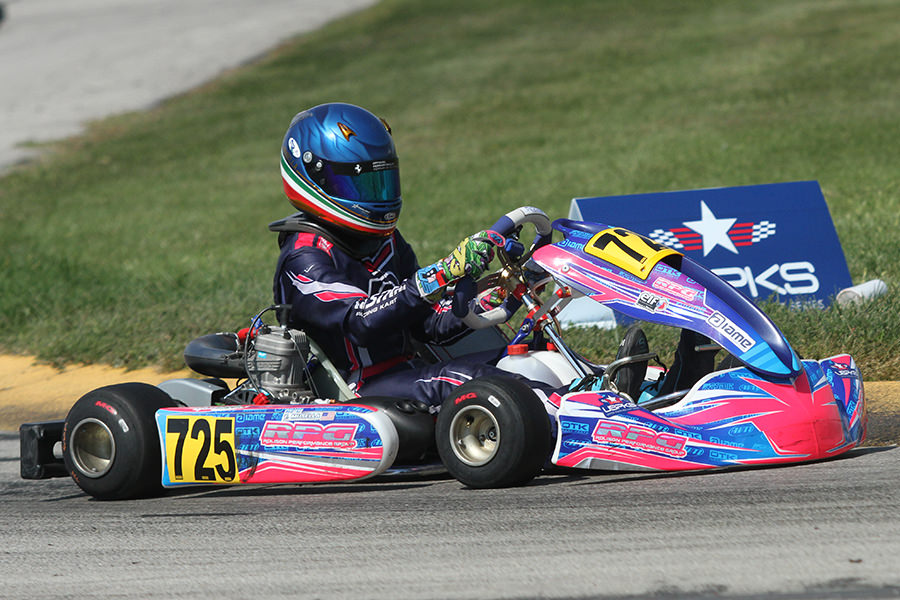 Jackson Gibson was the sole representative in Micro Swift on the weekend. Gibson had a strong qualifying pace both days, getting in the top-five to begin each round. Saturday ended the day just shy of the podium in fourth after Gibson held on with the leaders all day in such a competitive category. The following day, Gibson was unfortunately shuffled back in the field during the Prefinal, but would fight back in the Final to take seventh after gaining six spots. Jackson closed out the championship hunt third in the final standings.

In Mini Swift, Alan Bonilla was the one flying the RPG flag. Bonilla found himself racing in the upper half of the field all weekend, and fought hard to break into the top-10 on both days even after countless setbacks on track didn’t make his progress easy. He finished one spot away on Saturday in 11th and placed 16th on Sunday out of 36 drivers. 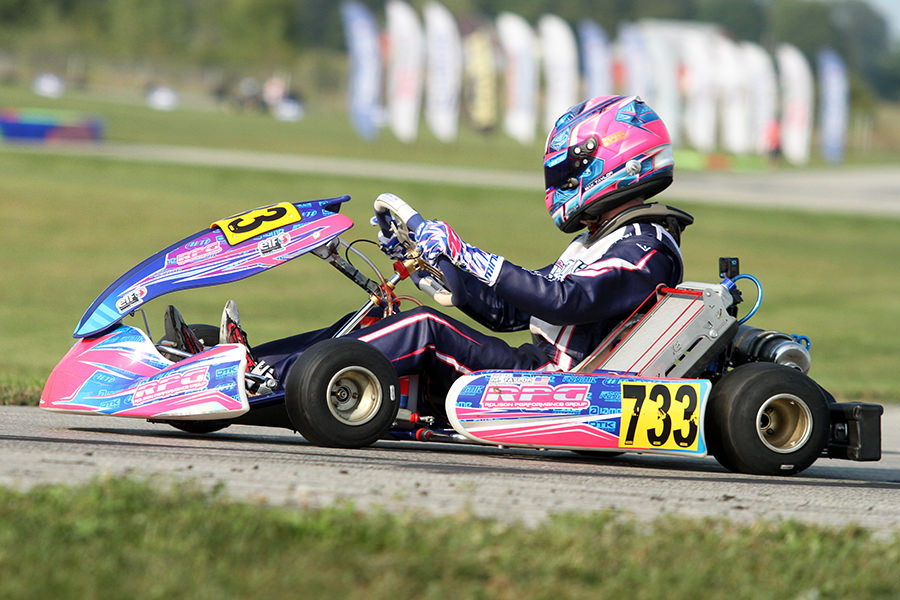 Max Taylor finished out the season with a second-place finish in X30 Junior on Sunday (Photo: eKartingNews.com)

The Rolison Performance Group operation heads further east, taking part in a special one-off event at the GoPro Motorplex. The IAME USA Grand National Championship is scheduled for October 13-16 at the popular Mooresville, North Carolina facility. It will be the final tune-up for the busy few weeks in Las Vegas – first with the ROK Vegas event with ROK Cup USA and to close out the 2022 season with the Superkarts! USA SuperNationals 25.