Jimenez and Lopes give team first victories and podiums of 2018 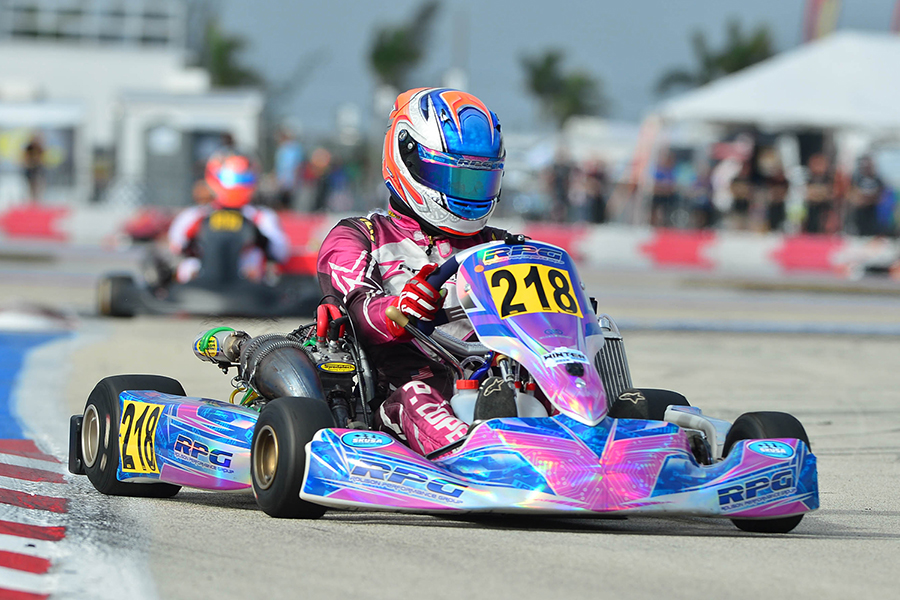 The off-season is over and the new year for karting in North America is underway for the Rolison Performance Group. One of the leading race teams and driver development programs in the sport traveled to Homestead, Florida to take part in the inaugural Superkarts! USA Winter Series program. The event was held at the updated AMR Homestead-Miami Motorplex presented by MG Tires with the warm weather along the Atlantic Ocean. Ten drivers filled the RPG tent in the paddock, competing in both the IAME and Honda divisions. Stock Honda is where the team earned the best results thanks to Victor Jimenez and Pedro Lopes.

Shifterkart racing is nothing new to the staff of Rolison Performance Group with veterans Wes Boswell, Mike Beeny and Bonnier Moulton providing the best coaching to maximize each driver’s potential. The work with RPG over the last few seasons for Victor Jimenez has helped to improve his pace behind the wheel. Using the home track knowledge, the Florida driver was able to sweep the weekend in the combined S4 Master / S4 Super Master Stock Honda race group. Victor entered the Super Master category for drivers 45-years and older, however, ended up leading all weekend long in the combined race group. A 47.074-lap was his best in qualifying to put him on pole position. Jimenez fought for the lead early in the Prefinal before establishing a 3.5-second advantage for the win. The Final was similar, leading 22 of the 24 laps en route to the inaugural SKUSA Winter Series victory. Sunday was another sweep, beginning with a 46.703-lap in qualifying aboard his RPG prepared Tony Kart to finish the session P1. Victor led all 14 laps of the Prefinal before scoring the victory in the Final to complete the perfect score.

RPG was able to grab two runner-up finishes in the competitive S2 Semi-Pro Stock Honda courtesy of Pedro Lopes. The 15-year-old Brazilian made his S2 debut in Florida under the Rolison Performance Group tent aboard a Kosmic machine. Lopes found himself at the back of the field to begin the opening round, having two laps removed in qualifying for exceeding the track limits – a common penalty throughout the weekend. Lopes fought his way up to fourth in the Prefinal and continued his progression forward in the Final. At the end of the 24-lap battle, Pedro was second in class, third overall in the combined S1/S2 to finish on the podium in his shifterkart debut. Lopes avoided a penalty in qualifying on Sunday to be third in class, sixth overall after the timed session, less than two tenths off the fast lap. Pedro slipped back at the start of the Prefinal, but fought his way back to finish in the same position he started, improving one spot in the Final to finish runner-up once again. 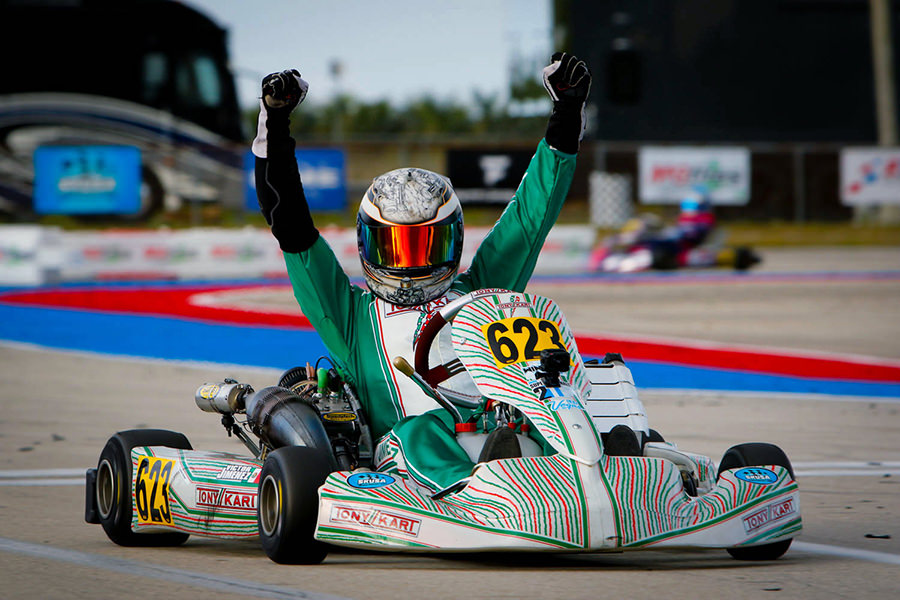 “I am really excited about the results we earned in the Stock Honda categories this weekend,” stated RPG owner Mike Rolison. “Victor has been working with us, developing his skill set behind the wheel and it has paid off with two inaugural victories at the SKUSA Winter Tour. Shifterkart racing needs young racers, and Pedro did a phenomenal job in Homestead for his first time in a Stock Honda ride. People know we have a great driver development program for TaG categories but our driver coaches have decades of experience in shifterkarts as well. This weekend proves we are a full service race team and ready to tackle the 2018 season.”

Branyon Tiner was able to give Rolison Performance Group another top-five finish with his performance in the Mini Swift category. “Biggs” was inside the top-10 all weekend long, among those in the hunt for victory each day. Tiner qualified 10th and worked his way to second in the Prefinal on Saturday. Issues on the opening lap dropped him nearly out of the top-10, with Branyon working up to the seventh spot. Sunday was better overall, including the second best lap in qualifying aboard his RPG prepared Energy, missing out on the top spot by 16 hundredths of a second. Tiner led early on in the Prefinal before ending up third at the checkered flag. Once again, Branyon slipped down the order early in the Final, and was able to fight back to finish fifth, securing his position in the series championship. RPG driver Josh Pierson improved on Sunday from a 31st finish to end up 14th.

Canadian Samuel Lupien recorded a top-10 finish in the competitive X30 Senior class. Lupien, who currently sits inside the top-10 of the eKartingNews.com TaG Driver Rankings, was a contender all weekend long. Sitting eighth during the opening round after qualifying and the Prefinal, Samuel was fighting forward in the Final. Contact on lap 18 included a number of front-runners, with Lupien down outside the top-20. He would go on to finish 18th. Sunday was a better ending as he flirted to break the top-five in the Prefinal before ending up ninth in the Final. Hannah Greenemeier made her Senior debut in Florida, placing 16th and 22nd while Jacob Gulick recorded results of 19th and 21st. 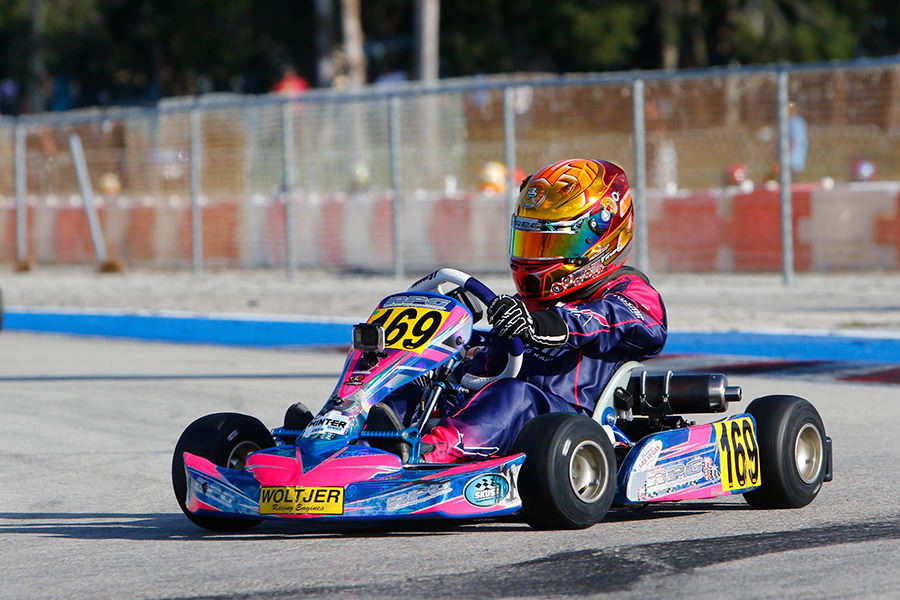 Texas driver Luke Lange joined the Rolison Performance Group for the first time, contesting the X30 Junior division. Lange progressed throughout the weekend and the RPG staff is excited about the future with the young driver. The same for Graham Trammell, who raced the Micro Swift category. Trammell continues to learn each weekend with the RPG operation, with his best moment of the weekend coming in qualifying on Sunday, ending the session in sixth. Brazilian Rodrigo Piquet took advantage of the RPG tent service during the weekend, competing in the X30 Master division and was a contender all weekend, placing fourth on Sunday.

“It is great to have some new and familiar faces under the tent for 2018,” continued Rolison. “Some of our young drivers have goals for the season, and the work began in Homestead. Hannah moving up to Senior is a big step, and she learned something every session. Luke is new to the team and fit right in. We have a great plan worked out for his development. And Graham is young and is still coming to grips with the talent on the national level. It is going to be a fun and exciting 2018!”

Rolison Performance Group is running operations from the east coast to the west coast. The team is heading west to prepare for the opening round of the California ProKart Challenge scheduled for February 2-3 at the Buttonwillow Raceway Park. RPG will be testing at the Buttonwillow, California facility in the coming days to prepare for one of the largest, toughest regional program in the country. After watching the big game on February 4, the team heads back to the Sunshine State for the finale event of the SKUSA Winter Series, scheduled for February 9-11 at the Ocala Gran Prix facility in central Florida.