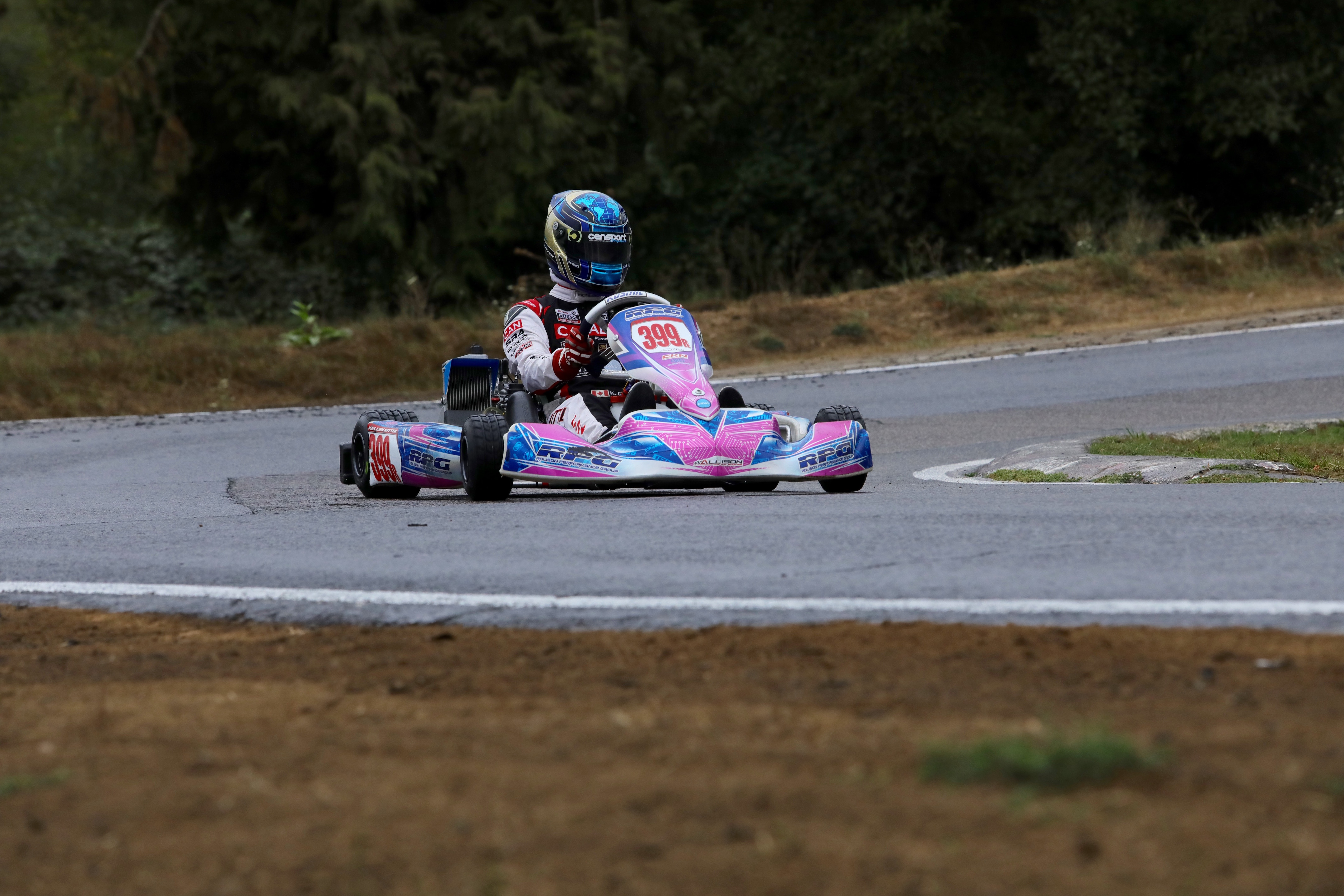 Kellen Ritter on track in Sunday’s final. He would later secure the Senior Max championship and a podium finish.
Photo by: Dalton Egger

September 23, 2017 – Rolison Performance Group (RPG) completes a fantastic showing at the season finale of the Can-Am Karting Challenge, September 15-17th, at Pats Acres Racing Complex in Canby, OR. The team has had an excellent showing in the series all year, proving their success by scoring five championship titles, along with two vice championships. With a roster of 10 drivers, RPG scored four victories and five podium finishes to cap off an excellent season of racing in the northwest series.

Once again, Hannah Greenemeier showed up with her “A” game for the series finale, hitting the track in Junior Max. Greenemeier set the pace for the field in Saturday’s qualifying run, and continued to lead the way through all three of Saturday’s heat races. Sunday’s forecast called for a change in weather conditions, causing Greenemeier to battle for the win in the rain. Starting on the pole after a pre-final win, she commanded an early lead on the field. After a mid-race battle, she took home a second-place finish, along with the series championship title. Greenemeier was also awarded a Rotax Grand Finals ticket, but had already earned her ticket earlier in the season at the US Open/US Rotax Grand Nationals.

Young pilot Graham Trammell pulled double duty once again, racing in Micro Swift and LO206 Cadet. He led the field from qualifying through the heat races in Micro Swift. In Sunday’s main, Graham led the field for a large part of the race, but would settle for a third-place finish when the checkered flag flew.  In LO206 Cadet, Trammell swept the field from qualifying to the final, taking home the win and was crowned vice-champion in the series point standings. Josh Pierson continued to perfect his race craft by competing in the Mini Swift category all weekend, taking first in all sessions on track and earning the championship title.

In LO206 Junior, three drivers flew the RPG flag for the championship weekend. Josh Pierson earned two heat race victories and the pre-final victory, setting himself up with front-row starting position for the final. With great racing all through the final, Pierson crossed the line in the third spot, landing himself on the podium for the second time of the weekend. Pierson also earned the championship title after a stellar performance in the category all season. Teammate Hannah Greenemeier joined the field for the first time this season. She snagged the pole position in qualifying, and earned solid finishes in the heat races. Greenemeier started near the rear of the field for the final after not taking the track for the pre-final. The young drivers’ excellent race craft took her through the field to claim the victory, landing herself on the podium for the second time this weekend.

In Masters Max, Billy Cleavelin captured the pole position in qualifying on Saturday morning and never looked back, securing all three heat race and pre-final victories. The final was a clean sweep for Cleavelin as well, leading all 20 laps and securing the victory. Teammate Mike Groff started the weekend off with a fifth-place qualifying run. He managed strong finishes in the heat races and pre-final, giving him a solid starting spot for the final. Groff would cross the line in the third spot to land himself on the podium for the final time of the Can-Am season. Groff also scored a third-place finish in the series championship.

Luke Selliken, Kellen Ritter, Jacob Gulick, and Matthew Taskinen all flew the RPG flag in Senior Max. Ritter scored the pole position in qualifying, along with all three heat race wins on Saturday. On Sunday, Ritter, Selliken, and Taskinen secured the top three spots in the pre-final, with Gulick coming in fifth. In the final, Selliken and Ritter battled for the top spot, switching positions multiple times throughout the race. In the end, Selliken crossed the line first, taking the win at his first Can-Am appearance of the year. Ritter came home in a close second-place, also earning the senior championship title. Ritter earned a Rotax Grand Finals ticket, but had already qualified for his spot in an earlier race this season. Gulick followed behind in the fourth spot. Taskinen recovered from an unfortunate mechanical issue at the start of the race to finish seventh.

RPG will now gear up for the final round of the SuperKarts! USA (SKUSA) Pro-Kart Challenge, the Lancaster Grand Prix, followed by preparation for the Rotax Grand Finals and the SKUSA SuperNationals. Follow RPG’s success at both events by following us on Facebook: https://www.facebook.com/RolisonPerformanceGroup/, Twitter: @rolison_pg, and Instagram: @rolisonpg.