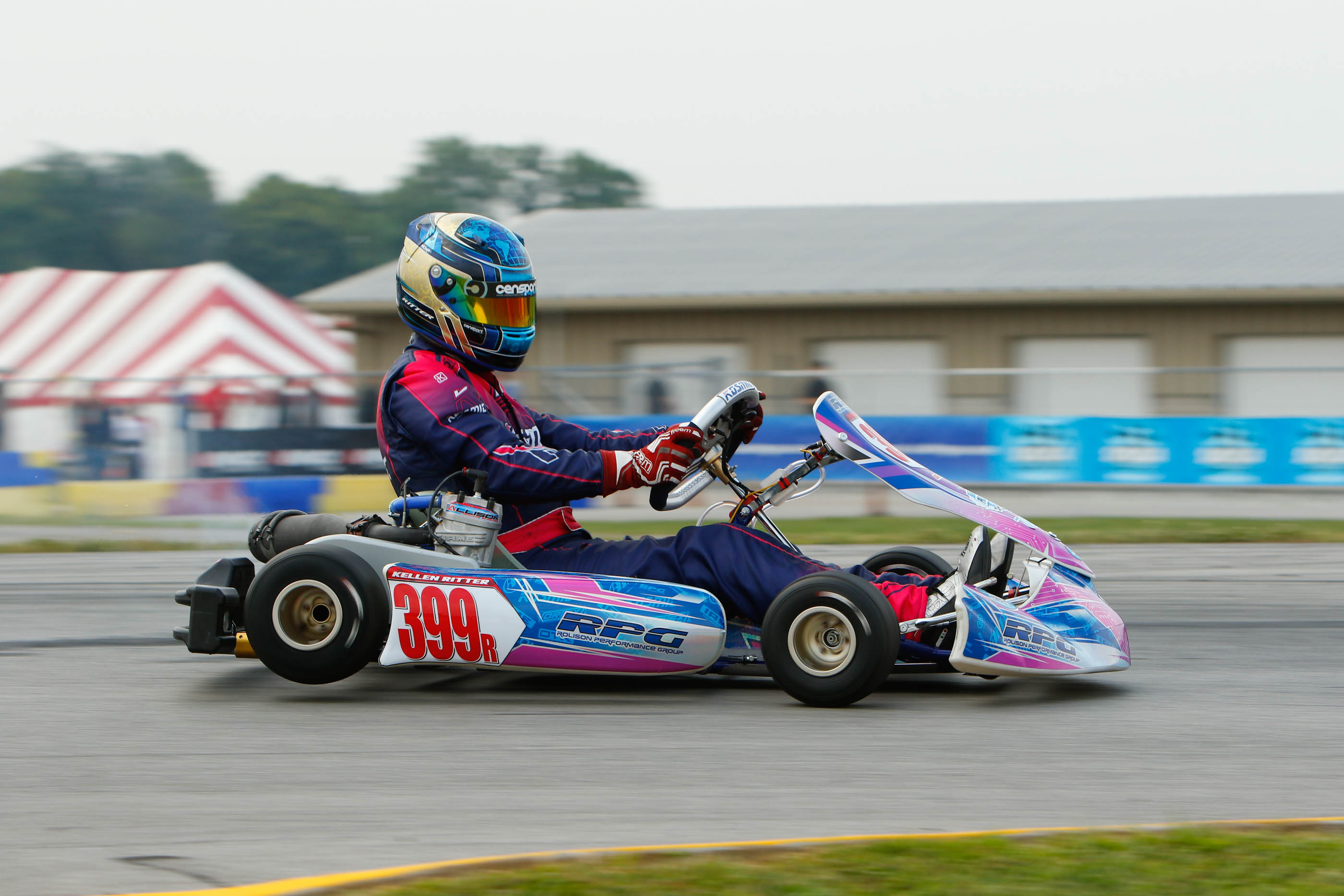 Kellen Ritter on track at the Indiana circuit, boasting two top-10 finishes over the weekend.
Photo by: On Track Promotions

August 18, 2017 –Rolison Performance Group (RPG) comes home victorious once again after a strong showing at the SuperKarts! USA (SKUSA) Summernationals, the final round of the Pro-Tour series, last weekend at New Castle Motorsports Park in Indiana. The team also garnered multiple top-five and top-10 finishes throughout their full roster of 12 drivers, spanning over a variety of classes.

Six RPG drivers set out to do battle in the massive 57-kart field in X30 Senior. Kellen Ritter put on an impressive performance both days of the event, earning an eighth-place finish on Saturday and a top-five finish on Sunday. Cedrik Lupien remained a consistent top-20 contender all weekend, and scored two top-15 finishes to cap off his Pro Tour season. Brother Samuel Lupien drove to a solid seventh-place finish in Saturday’s final, but Sunday did not bring him the same result. After a 47th place finish in the pre-final, Samuel put his head down and drove, gaining 32 spots in the 25-lap main event and scoring an 18th place finish. Emma Delattre, Jacob Gulick, and Logan Cusson all showed speed throughout the race weekend, consistently running in the front half of the competitive senior field.

In X30 Junior, Hannah Greenemeier and Pedro Lopes earned strong finishes both days of the event. Saturday saw the teammates battling closely with each other, Lopes coming in 10th and Greenemeier 11th in the final. On Sunday, the pair followed suit again with 12th and 13th place pre-final finishes, this time Greenemeier leading the way. In the final, Greenemeier went on to gain one more position to finish her weekend with twin 11th place finishes in her second Pro-Tour event. Lopes lost a few positions in battle during the final, but still came home with a solid 16th place run.

X30 Masters driver Tim Meyer made his debut with the RPG team on the Indiana circuit. Meyer showed he had speed to contend at the front early on with a fourth-place qualifying effort on Saturday. He battled for a top-five finish in the final before a mid-race incident sent him to the back of the field, but drove himself back to a top-fifteen finish.

In Mini Swift, Josh Pierson and Branyon Tiner flew the RPG flag in the competitive cadet field. Pierson found himself with a 23rd mid-pack finish on Saturday, but continued to work himself through the field on Sunday, gaining 16 positions in the pre-final from him qualifying spot. In Sunday’s final, he picked up five more spots to finish the weekend with a solid 18th place finish. Tiner was fast and consistent on Saturday, earning a strong ninth-place finish in the final. On Sunday, he faced some bad luck in the pre-final, but worked his way through the field in the final and gained 27 positions, crossing the line in 21st.

Kyle Wick put on a show in the S2 shifter category, vying for a shot at the prestigious Pro Tour championship. In Saturday’s final, he had the speed to challenge for the win, but a front-end mechanical failure prevented him from doing so, having to settle for a second-place finish. Wick came back on Sunday with everything he had. Qualifying third, he drove his way to the front to score the win in the pre-final. In the final, he had an early race battle for the top spot, but completed the pass a few laps in and never looked back. Wick turned the fastest lap of the race and brought home his second Pro Tour win of the season.

RPG’s next stop on their race schedule is Monterey, CA for round five of the SuperKarts! USA (SKUSA) California Pro Kart Challenge, September 1-2nd. Follow RPG’s season by following us on Facebook: https://www.facebook.com/RolisonPerformanceGroup/, Twitter: @rolison_pg, and Instagram: @rolisonpg.