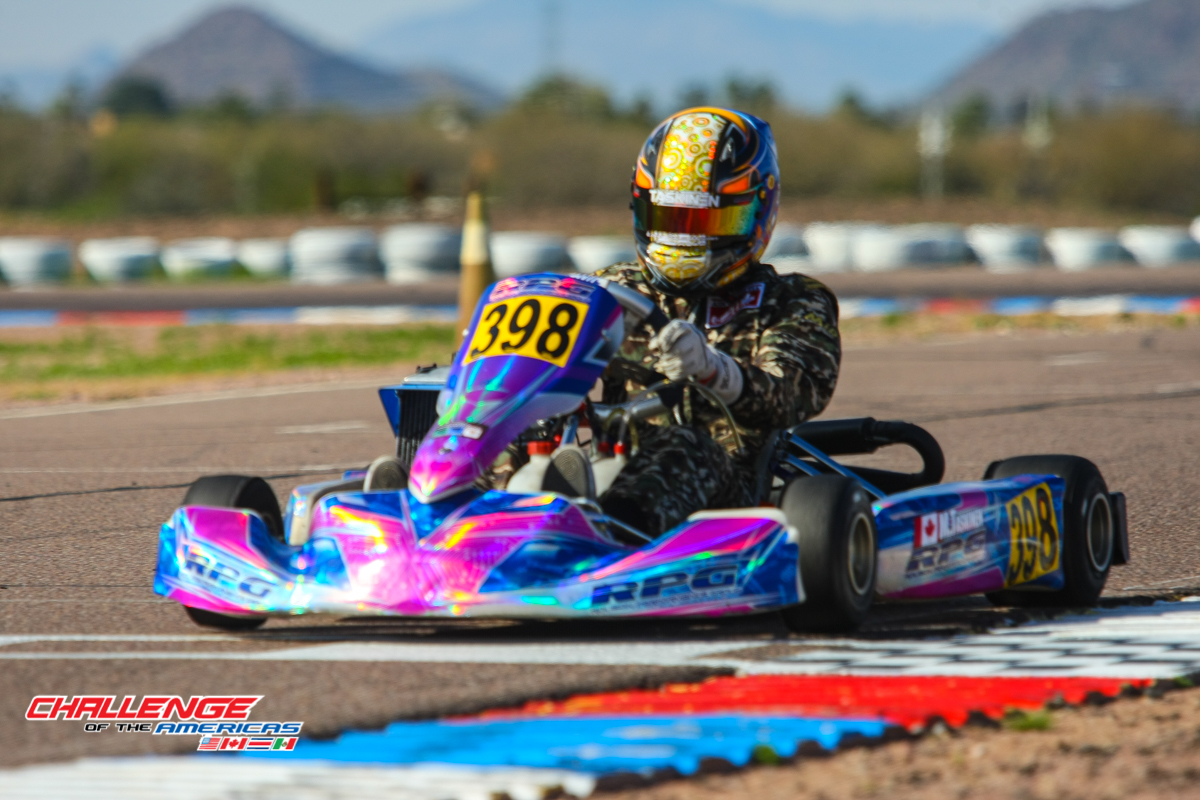 Matthew Taskinen on track in Senior Max at the Challenge of the Americas in Phoenix, AZ.

March 3, 2017- Rolison Performance Group has finished up another month of racing around the country. The team travelled from coast-to-coast in February, racing in four different national series in three weeks, including the Florida Winter Tour ROK Cup and Rotax Challenge, the SuperKarts! USA (SKUSA) Pro-Kart Challenge, and the Rotax Challenge of the Americas. The RPG team and drivers garnered a total of three wins, six podium appearances, and 21 top-10 finishes across the four events.

The team started their month of travel pulling double duty, as they raced two events on the same weekend on opposite sides of the country. On the East coast, RPG ran round two of the Florida Winter Tour ROK Cup in Palm Beach, FL. Three drivers represented the team in the ROK Senior category. Coming off a second-place finish in round one at Homestead, Arthur Leist showed the speed for podium contention all weekend long. He would end the weekend with a solid fourth-place finish in the final. Gabriel Paturle was a consistent top-10 contender throughout the heats and pre-final. He drove to a fifth-place finish in Sunday’s main event. Brandon Collins showed consistent improvements all weekend, but was forced to retire early in the final. Victor Schoma also flew the RPG flag, competing in ROK Junior. Schoma came back from a mid-pack starting position in the pre-final on Sunday to earn a top-five finish in the final. Over on the West coast, the team focused on round one of the SKUSA Pro-Kart Challenge in Buttonwillow, CA. S2 driver Kyle Wick set the pace for the field as he earned the pole in qualifying. He suffered a DNF in heat one, but came back strong in heat two to earn a third-place finish, gaining 20 positions during the race. Wick did not stop there, gaining two more positions in the final to bring home the win. Jacob Gulick, Josh Pierson, and Graham Trammell all earned top-15 finishes in their main events.

The RPG squad stayed put for another weekend of racing in Palm Beach, this time for the Rotax Challenge portion of the Florida Winter Tour. Senior Max driver Arthur Leist earned a front row spot in Friday’s qualifying run to kick off the weekend, but faced some bad luck with two DNFs in Saturday’s heats. He worked his way up from a rear-of-the-field starting position to a fourth-place finish in the pre-final, earning the fast lap of the race. He would end his weekend with a top-five finish in the final. Hannah Greenemeier and Vinicius Dias took the track in Junior Max. Greenemeier scored an 11th place finish in the final, Dias following behind with a top-20 finish. Teammates Enzo Swan and Michael Costello threw their hats into the mix in Micro Max. Swan brought home a ninth-place finish in Sunday’s main event. Costello was forced to retire from the event early after an incident in Sunday’s pre-final prevented him from starting the final.

The team then travelled back to the West coast for round two of the Rotax Challenge of the Americas in Phoenix, AZ, with a full line-up of 10 drivers. Micro Max pilot Graham Trammell made huge improvements all weekend, earning a sixth and seventh place finish in Saturday and Sunday’s finals, his best national performance yet. Hannah Greenemeier, Alexis Apodaca, Cash Tiner, and Branyon Tiner all hit the track in the Junior Max category. Greenemeier battled hard in the competitive field, earning a fourth-place finish in Saturday’s final. She came back on Sunday looking for more, and brought home a second-place finish. Apodaca scored sixth and eighth place finishes in Saturday and Sunday’s finals, respectively. Cash Tiner stayed consistent with two fifth place finishes in the event finals. Branyon Tiner followed close behind his brother with two top-10 finishes. Billy Cleavelin proved untouchable for the Masters Max field, sweeping both days of the event and earning two wins. Teammates Kellen Ritter, Matthew Taskinen, and Jacob Gulick all threw their hats into the mix in Senior Max. Ritter scored a second and third-place finish in the finals, followed closely by Taskinen, who earned two fourth-place finishes. Gulick brought home two top-10 finishes in his second senior appearance on the national circuit. David Cole from eKartingNews.com joined the RPG team for the weekend, driving in the LO206 Senior category. He showed improvements every session on track, earning a top-10 in the final to finish off his weekend of hard work.

The next stop for RPG is the inaugural SKUSA WinterNationals, the first round of the Pro-Tour, in New Orleans, LA, March 3-5th. They will then head to Ocala, FL for two weeks of racing for the final round of the Florida Winter Tour Rok Cup, March 10-12th, and the final round of the Florida Winter Tour Rotax Challenge, March 17-19th, which will end their six-week stint on the road. The team heads into March in the cross hairs of multiple championships, hoping to close out their winter series season with a title. If you are interested in joining the team for these events or any others, contact Mike Rolison at 503-260-4514.