Versteeg and Pierson bring home the hardware for RPG

NEWBERG, OREGON (July 31, 2014) – It is referred to as ‘Rotax Week’ during the period of July 14-20, with drivers from all across the country converging to one location to decide the United States Rotax Max Challenge national champions. This year’s Cold Stone US Grand Nationals were held at the Miller Motorsports Park in Tooele, Utah, with two unofficial days of practice, followed by three intense days on track action. The Rotax Grand Nationals welcomed almost 200 drivers and their respective teams from all over the United Sates. Among those teams was the Rolison Performance Group of Newburg, Oregon. Led by Mike Rolison, RPG and its roster of 12 drivers spread out across four classes did battle for Rotax glory in Utah.

Led by strong efforts from drivers in all four of the different classes, RPG had a successful week in Utah, and proved that the past results of four Rotax Challenge of the Americas, two Rotax Can-Am ProKart Challenge titles, and help guiding drivers to the Rotax Grand Finals for nearly a decade were achieved through hard work and determination. The results were not as hoped for the operation following Championship Sunday, highlighted by podium finishes from Austin Versteeg in Junior Max and Josh Pierson in Micro Max. 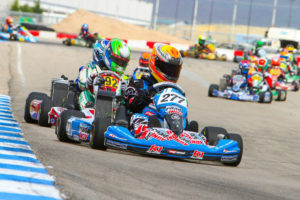 Austin Versteeg drove from last in qualifying to end up third on the Junior Max podium (Photo: Ken Johnson – Studio52.us)

In the Junior Max category, RPG supported five drivers this past weekend. Versteeg came into the Cold Stone US Grand Nationals after completing a very successful first half of 2014, which included a victory at this year’s Rotax Summer Shootout. Versteeg – who had already punched his ticket to this year’s Rotax Grand Finals at the Rotax Challenge of the Americas – started the weekend off on a sour note. Versteeg would suffer a broken hub while beginning his qualifying session, keeping him from laying down a single lap. Versteeg stayed positive though and went to work in the heat races. Versteeg drove to a top-eight finish in each of the three heat races, after coming from dead last all three times. Following an eighth place finish in the Prefinal Sunday morning, Austin had all but erased the lack of qualifying and put together a solid performance in the main event and battled till the end, capping it off with a last lap pass to secure a podium finish in third place. 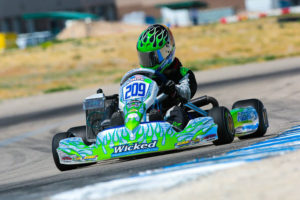 With the trouble for Versteeg early, the RPG banner flew with Washington driver Kyle Wick. The improving talent qualified fifth overall and earned a position in the SuperPole session that included the top-six drivers. Wick was unable to better his position, ending up sixth to line up on the second row for his heat races. Three top-10 finishes placed Kyle 18th on the grid for the Prefinal. A clean start helped to propel the RPG driver back into the top-10, finishing eighth after 16 laps. Looking to battle his way into the top-five, a damaged kart from a skirmish in the opening laps of the Final hampered his pace toward the end of the race. Wick fought strong, never giving up, and went on to finish the 20-lap event in the 18th position.

Local racers Walker Hess and Bruno Carnerio teamed up with RPG for this year’s Grand Nationals. Hess completed an impressive weekend at his home track, despite some bad luck on Sunday. Walker raced to three top-10 finishes in the heat races showing great speed. Hess’ Championship Sunday began sour after he was pushed off-course in the Prefinal. He kept positive and performed strong in the Final, moving from 32nd on the grid to 16th by the checkered flag, nearly earning the Hard Charger Award. Carnerio never gave up throughout the week as well, placing 19th in qualifying and earning a best ninth place result in the heat races. He was forced to race in the Last Chance Qualifier and after scoring the win, was handed a 10-second penalty for a start infraction. This placed him seventh overall and out of Championship Sunday. When one driver was unable to compete, Carnerio was granted a place on the main event grid. Starting 34th, he drove his way up to the 15th position. Dhyllan Skiba made great strides in only his second US Grand Nationals event, working with the RPG staff. He was involved in a wreck in the LCQ, and the Virginia drive was unable to move on for the remainder of the event. 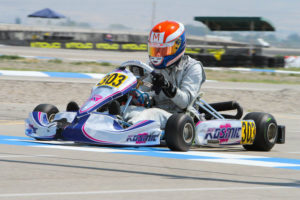 Four RPG drivers did battle in the Senior Max class at Miller Motorsports Park. Luke Selliken waved the RPG banner high and proud all weekend. The Oregon driver began the weekend by throwing his Kosmic to third on the starting grid for the heat races. Selliken was on point in the heats as he scored wins in the first two races, and placed fourth in the last heat. Starting from the pole position in the heat race, an engine issue dropped him down the order quickly and eventually ended up 11th. Turn one was a crowded place at the start on the Final and unfortunately Selliken was caught up in the lap one contact. The wreck did not eliminate Selliken from the race, but he did receive heavy front-end damage. Selliken drove amazingly well despite a bent front spindle Selliken drove to a 16th place finish and laid down the race’s fastest lap. 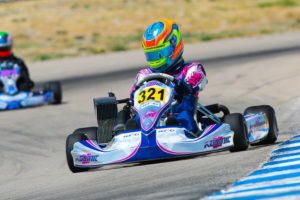 Blaine Rocha battled through an illness during the week to record a fifth place result, best among the Senior Max rookies (Photo: Ken Johnson – Studio52.us)

Blaine Rocha clung consistently around the top-10 throughout the weekend, battling with health issues beginning Friday afternoon. Following a 12th place qualifying effort Rocha drove to back-to-back top-10 finishes in the first two heats, followed by a 13th place run in the final heat race in between trips to the medical center for IV fluids. Sunday morning Rocha’s health was far better then before, as he ended up eighth in the Prefinal. From there, the California driver rallied to a fifth place result in his first Senior Max US Grand Nationals. Local driver McKay Snow also hung near the top half of the order throughout the weekend. Snow posted the 11th quickest time in qualifying, and was consistently in the top-15. He was able to rebound from a 23rd place run in a wild Prefinal to drive to a top-15 finish in the Final. Hailey Groff was RPG’s fourth Senior Max driver in Utah. Groff progressed all weekend, but bad luck in the heats and DNF in the Prefinal put her at the back of the field for the main event. She ended up placing 22nd in the Final. 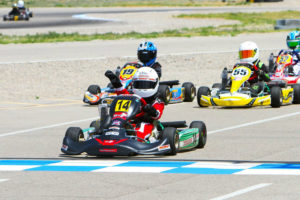 Tait Blum and Josh Pierson represented the Rolison Performance Group in Micro Max. Pierson spent the early part of the weekend flying under the radar for the most part. After qualifying inside the top-10, he ran 11th in the first two heat races, before finishing the third heat race in seventh. Sunday is when Pierson really turned up the heat. Working with Aaron Neliton of Neliton Race Concepts, Josh drove to a fourth place finish in the Prefinal. While running in the top-five on the closing lap, Pierson seized an opportunity to move into the second position to earn the runner-up finish. Blum stayed solidly inside the top-15 all weekend, before coming home 13th in the main event.

The lone RPG driver in Mini Max at this year’s US Grand Nationals was Conner Wick. The Washington youngster qualified 32nd overall, and improved on his position in two of the three heat races to keep him out of the LCQ race. Starting 27th in the Prefinal, Wick advanced to 18th in the Prefinal but retired early in the main event after nearly reaching the top-10.

The Rolison Performance Group is back trackside, as the team travels to the Superkarts! USA Pro Tour SummerNationals, set for the Modesto Grand Prix street race on August 1-3. The team then travels to the Rotax Can-Am ProKart Challenge finally on August 15-17 at the Greg Moore Raceway in Chilliwack, British Columbia.

About Rolison Performance Group:
The Rolison Performance Group is a leading race team and prep shop in American karting, and is also a Rotax Service Center and a Kosmic chassis dealer. Owner Mike Rolison, known as “Roli” at the racetrack, has built a career coaching some of the best kart racers on the West Coast. Over the past decade, he has helped 100′s of drivers and mechanics improve their craft. Mike brings world class driving and coaching experience to every racer he works with. Drivers that have been part of the Rolison Performance Group team over the past few seasons have recorded a number of national victories, claiming Superkarts! USA Pro Tour and Rotax Challenge of the Americas titles. RPG provides trackside support and arrive-and-drive programs for many series, including the Florida Winter Tour, Challenge of the Americas, US Rotax Grand Nationals, Pan-American Challenge, SKUSA Pro Tour, Can-Am Karting Challenge and the SKUSA SuperNationals. The team is a Kosmic chassis and product line dealer and is proud to campaign karts on the regional and national stage.