NEWBERG, OREGON (July 16, 2014) – This week, Rotax teams and drivers from all over the country will compete in the 2014 Cold Stone US Grand Nationals to decide the seven national champions. Among the teams that will make the trip is the successful Rolison Performance Group, gearing up to be at the front of the fields with a roster full of talented drivers. The Miller Motorsports Park, located in Tooele, Utah is the site of this year’s event, with RPG drivers having previous success at the 9/10-mile course.

Mike Rolison and the RPG team are supporting a number of drivers that will be in contention for victories and podiums throughout ‘Rotax Week’ at Miller Motorsports Park. With a 12-driver roster heading in to official practice Thursday afternoon, RPG will support drivers in the Junior Max, Senior Max, Mini Max, and Micro Max categories in Utah. Rolison Performance Group has a strong history of helping drivers earn tickets to the Rotax Grand Finals, and the same goal is on the horizon this week. 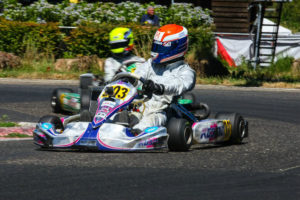 Senior Max rookie Luke Selliken is ready to take RPG to the top step of the podium this weekend at the Cold Stone US Grand Nationals (Photo: SeanBuur.com)

RPG will field four drivers in the Senior Max division. Luke Selliken is riding a big wave as he returns to Miller Motorsports Park after a successful weekend in the Rotax Summer Shootout last month. The Senior Max rookie ran near the front on Saturday as he earned a trip to the podium in third place, and backed it up with a stellar drive to the front for the victory on Sunday. Selliken picked up his first Senior Max victory at the Rotax Can-Am ProKart Challenge, earning three total thus far and is in the title chase. Utah driver McKay Snow is excited to be competing on his home track, as the Senior Max rookie has progressed well after making the transition from Junior Max. Snow was a top-10 finisher at the Shootout last month, and is looking to continue that pace this week. Rounding out the trio of Senior rookies is NorCal driver Blaine Rocha. The 2013 Rotax Challenge of the Americas Junior Max champion is gunning to help put RPG on the podium in Utah. Hailey Groff completes the Senior Max roster for Rolison Performance Group, The Washington state driver is making her first US Grand Nationals start. 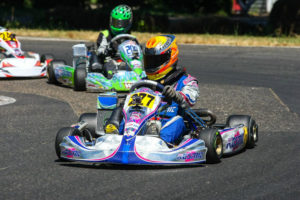 Austin Versteeg is ready to add a Junior Max title to the resume of Rolison Performance Group (Photo: SeanBuur.com)

Five drivers fill out the Rolison Performance Group roster in the competitive Junior Max category. Leading the squad is hometown driver Austin Versteeg. The reigning Rotax Challenge of the Americas champion has logged plenty of laps at MMP, and showed his ability and speed at the Summer Shootout in June where he secured a victory on Sunday, proceeded by a third place finish on Saturday. Versteeg has currently four wins to his credit at the Rotax Can-Am ProKart Challenge, leading the championship chase. Kyle Wick has paced right with Versteeg throughout the Can-Am series, winning two of the feature races. The Washington state driver was impressive this winter at the Rotax Challenge of the Americas as well, putting him among the contenders this week.

Walker Hess and Bruno Carneiro are also Utah residents, looking to make an impact at the US Grand Nationals under the RPG tent. Hess has been a regular at this year’s Utah Kart Championship – the club series at Miller Motorsports Park – where he has scored three wins over seven weekends. Carneiro completes the Utah trio of Junior Max drivers competing out of the RPG tent. The young Carneiro – like Hess – has been staying sharp by contesting UKC races this year. Virginia’s Dhyllan Skiba completes the Rolison Performance Group Junior roster, making his first US Grand Nationals start in the Junior Max category.

RPG will support two drivers to the contest the youngest class offered at this year’s Cold Stone US Grand Nationals, Micro Max. Tait Blum and Josh Pierson will team up to chase the national title at Miller this weekend. Pierson is in the championship lead at the Rotax Can-Am ProKart Challenge, while Blum is set to compete at his first US Grand Nationals. Rounding out the Rolison Performance Group roster is Mini Max driver Conner Wick, another title contender at the Rotax Can-Am ProKart Challenge series.

For more information on all the services that the Rolison Performance Group has to offer, visit www.rolisonperformancegroup.com or find them on Facebook.

About Rolison Performance Group:
The Rolison Performance Group is a leading race team and prep shop in American karting, and is also a Rotax Service Center and a Kosmic chassis dealer. Owner Mike Rolison, known as “Roli” at the racetrack, has built a career coaching some of the best kart racers on the West Coast. Over the past decade, he has helped 100′s of drivers and mechanics improve their craft. Mike brings world class driving and coaching experience to every racer he works with. Drivers that have been part of the Rolison Performance Group team over the past few seasons have recorded a number of national victories, claiming Superkarts! USA Pro Tour and Rotax Challenge of the Americas titles. RPG provides trackside support and arrive-and-drive programs for many series, including the Florida Winter Tour, Challenge of the Americas, US Rotax Grand Nationals, Pan-American Challenge, SKUSA Pro Tour, Can-Am Karting Challenge and the SKUSA SuperNationals. The team is a Kosmic chassis and product line dealer and is proud to campaign karts on the regional and national stage.