MODESTO, CALIFORNIA (August 3, 2014) – The Rolison Performance Group added to the long list of podium finishes during the successful 2014 season thus far competing at the inaugural Modesto Grand Prix on August 1-3. Two championships at the Rotax Challenge of the Americas, a number of contenders still pursuing titles at the Rotax Can-Am ProKart Challenge, and solid finishes at the Florida Winter Tour and Cold Stone US Grand Nationals in the past seven months have continued on from the already years of success Mike Rolison has experienced coaching drivers all over the country and the world. This past weekend, Blaine Rocha and Austin Versteeg added new milestones in their young careers under the RPG tent, as the Superkarts! USA SummerNationals were the site of Rocha’s first ever TaG Senior victory and Versteeg’s first S5 Junior podium finish.

Three drivers took part in the TaG Senior headline category for Rolison Performance Group, newest member Austin Elliott along with Senior rookies Luke Selliken and Blaine Rocha. Elliott was the top RPG driver in qualifying on Saturday, posting the sixth best time of the session. Rocha was only able to complete one lap with an issue on his kart, while Selliken was 17th. Elliott was involved in an opening lap incident for Heat #1, which put him to the back of the grid for Heat #2. Rocha and Selliken worked together to climb up the order to finish a respectable eighth and ninth. Bad luck struck the RPG tent during the second heat with Elliott involved in a hard wreck, suffering a broken collar bone and a rib to end his weekend early and Selliken was unable to complete a lap. Rocha meanwhile carried the team banner, continuing his advancement toward the front of the field to end up fourth. In the early Sunday morning hours, the main event took place. Rocha fell back at the start, but was able to move back into the fourth spot. Throughout the 16-lap event, he continued to fight for position, reaching the checkered flag in the fourth position for his best Pro Tour result to date. Selliken was able to come from the back of the field to earn a top-10 result, placing eighth. 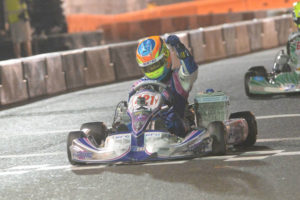 Rocha was the lone RPG driver to compete on Sunday, making it a memorable day for the nearby Oakdale resident. The Senior rookie carried the speed over into Sunday, posting the second quickest lap of the qualifying session. Starting on the outside of row one, Rocha lost two positions at the start, but the young driver fought his way back into the second position by the end of the 10-lap heat race. A better start for the main event kept Rocha in the hunt for the lead. A red flag near the halfway mark bunched the field up once again. When the race resumed, Rocha was into the second position, hounding the leader. On the final lap, Rocha was able to position his RPG Kosmic into the lead, and held on to reach the checkered flag for his first Pro Tour victory.

Austin Versteeg made his second Pro Tour start in the growing S5 Junior Stock Moto category. After two fourth place finishes at the opening weekend in Dallas, the Utah driver was primed for contention to land on the podium. Versteeg qualified in the third position, setting up for a run at the opening heat race win. The first eight-lap run was a duel between he and the championship leader. On the final circuit, they continued fighting for the lead and in turn three, contact was made. Austin got the worst, and hit the barriers to stop him from finishing. Starting 11th in Heat #2, Versteeg used his patience and consistent speed to move his way forward to end up fourth after eight laps. A bit slow off the line to start the 16-lap main event, Austin was fifth after the opening lap. He pushed forward to third, but ran out of time to reel in the leaders. Versteeg crossed the line third for his first podium finish.

Representing the Rolison Performance Group in TaG Junior was Bakersfield, California driver Trenton Sparks. The 2013 TaG Cadet vice-champion made his first Pro Tour start of 2014 at the Modesto Grand Prix. Sparks was fast out of the box, placing fourth in qualifying. The opening heat race was a hard-fought battle, with Sparks dropping back to the seventh. He began charging forward in Heat #2, up to fourth by the halfway point, when his exhaust header broke loose. That forced him off the course and 23rd on the grid for the main event. Unfortunately, starting in the back, he was caught up in an opening lap incident and was unable to finish one lap. His performance on track however should have him among the quick drivers at the SuperNationals XVIII in Las Vegas.

The youngest competitor of the entire SummerNationals was RPG TaG Cadet driver Joshua Pierson. A recent runner-up in the Micro Max division at the Cold Stone US Grand Nationals, it took time for the young driver to come to grasp with the technical and unforgiving street course. Unfortunately, Pierson was removed from the category on Saturday after not qualifying fast enough to continue on with the Round Three events. The next morning, he improved his performance to qualify into the Round Four action. He kept improving his pace throughout the day, ending up 28th in the main event. With at least three more years in the category ahead, Pierson is sure to continue his development under the RPG tent, working with Neliton Racing Concepts.

The Rolison Performance Group is back trackside this weekend, as the team takes part at the Western Canadian Championships event, north of the border at the Greg Moore Raceway. The following week will be the Rotax Can-Am ProKart Challenge series finale on August 15-17 at the Chilliwack, British Columbia facility.

####
About Rolison Performance Group: The Rolison Performance Group is a leading race team and prep shop in American karting, and is also a Rotax Service Center and a Kosmic chassis dealer. Owner Mike Rolison, known as “Roli” at the racetrack, has built a career coaching some of the best kart racers on the West Coast. Over the past decade, he has helped 100′s of drivers and mechanics improve their craft. Mike brings world class driving and coaching experience to every racer he works with. Drivers that have been part of the Rolison Performance Group team over the past few seasons have recorded a number of national victories, claiming Superkarts! USA Pro Tour and Rotax Challenge of the Americas titles. RPG provides trackside support and arrive-and-drive programs for many series, including the Florida Winter Tour, Challenge of the Americas, US Rotax Grand Nationals, Pan-American Challenge, SKUSA Pro Tour, Can-Am Karting Challenge and the SKUSA SuperNationals. The team is a Kosmic chassis and product line dealer and is proud to campaign karts on the regional and national stage.