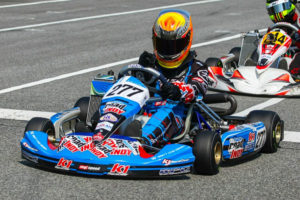 Versteeg capped off his Junior Max championship season with his fifth victory of the year (Photo: SeanBuur.com)

SANDY, UTAH (August 26, 2014) – The 2014 season has been a breakout season for the young Austin Versteeg. The 15-year old is finishing his final year in the Junior category, coming away with some prestigious hardware in the process. This past April, the Rolison Performance Group driver secured the Rotax Challenge of the Americas title with a victory in Sonoma, California, earning his first ever ticket to the 2014 Rotax Max Challenge Grand Finals, scheduled this year for Valencia, Spain in November. Fighting back from a mechanical failure in qualifying at the Cold Stone US Grand Nationals in Tooele, Utah, Austin drove his way through the field over the course of five on-track sessions to earn a third place position in his first trip to the podium at the event. Over the August 15-17 weekend, Versteeg wrapped up the 2014 Rotax Can-Am ProKart Challenge campaign by securing two class championships – one in Junior Max and the other in S5 Junior Stock Moto, winning a feature race in each.

Versteeg began the weekend as the driver to beat in Junior Max, opening up Round Seven qualifying with the fast lap of the session. He led the first seven laps before falling back to second in a duel for the Prefinal win. After crossing the finish line second, Austin set his sights for the victory in the Final. He and Prefinal winner Sting Ray Robb continued their fight into the 20-lap race. Robb led early before Versteeg put himself into the lead after the halfway mark. The shuffling continued until the checkered flag, with Versteeg ending up in the runner-up position, his third of the season.

Just 39 thousandths of a second kept Versteeg from earning the fast time in Sunday’s qualifying, as the fight up front continued to be close. Austin, starting outside of row one for the Prefinal, was shuffled back to fourth on the opening lap. Back into the second spot by lap five, the gap was too large to close in on the leader, with Versteeg salvaging the second position. Through the opening lap of the main event, Versteeg retained the second spot and put the pressure on the leader early. Austin took over the top spot on lap four, and post consistent lap times for the remainder of the 20-lap event to secure his fifth victory of the season.

The entire Rotax Can-Am ProKart Challenge program was solid for Versteeg, finishing in the top-two steps of the podium in all eight feature races. That consistency awarded him the series championship by 77 points. Earning a Rotax Grand Finals ticket through the Rotax Challenge of the Americas championship back in April, the ticket offered up through the Can-Am program was deferred to the second place driver in the championship with Versteeg already holding a ticket through an international program. One of the most coveted tickets to earn in karting, Austin did so twice in the same year. 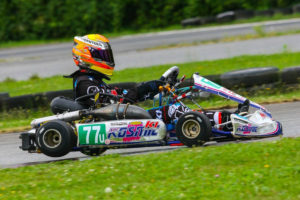 Austin made it two championships on the year at the Can-Am series by locking up the S5 Junior Stock Moto title. Versteeg won the five races he entered, including a sweep in four rounds. Contesting just the Saturday round, Austin was challenged early on and qualified in the second position. While posting the fast lap in the Prefinal, Versteeg remained in the second spot after the 15-lap heat race, setting the stage for the main event. Austin took over the lead on the opening lap of the main event, and never looked back to score his fifth victory of the season. This performance came off his first podium result at the Superkarts! USA Pro Tour during the Modesto Grand Prix, site of the 2014 SummerNationals. The August 1-3 event was the inaugural street race for the Northern California city. Versteeg qualified third and was in the hunt for the opening heat race win until contact with a barrier damaged his chassis. The RPG crew rebuilt the kart and went from 12th to fourth in the second heat race. Austin advanced into the third position in the feature, securing his first Pro Tour podium result of the season.

The 2014 Rotax Challenge of the Americas and two-time Rotax Can-Am ProKart Challenge champion is turning his focus directly on preparing for this year’s Rotax Grand Finals, slated for the end of November in Valencia, Spain. It will be the first trip for Versteeg to the ‘Olympics of Karting’ where he will compete against drivers from over 60 countries in an effort to earn a world Rotax title. The next race is scheduled for October 15-19 at the GoPro Motorplex in Mooresville, North Carolina for the annual Rotax Pan American Challenge, a perfect tune-up event for the Rotax world championships the following month. Visit www.austinversteeg.com for more information and to follow his path during the rest of the year.

About Austin Versteeg: Austin Versteeg is an up-and-coming name in the world of motorsports. The young Sandy, Utah native began karting at the young age of eight, and has done big things in a short amount of time. Racing locally at the Miller Motorsports Park in Tooele, Versteeg quickly moved on to the regional and national competition level in the sport. He has competed at the Rotax Challenge of the Americas, Florida Winter Tour and the Superkarts! USA Pro Tour, finding success in each including the 2011 Mini Max FWT championship. Austin has a victory under his belt north of the border, winning at the prestigious Le Monaco de Trois-Rivieres street race. Now into his third year in the Junior division ranks, Versteeg is primed at growing into a motorsports star.