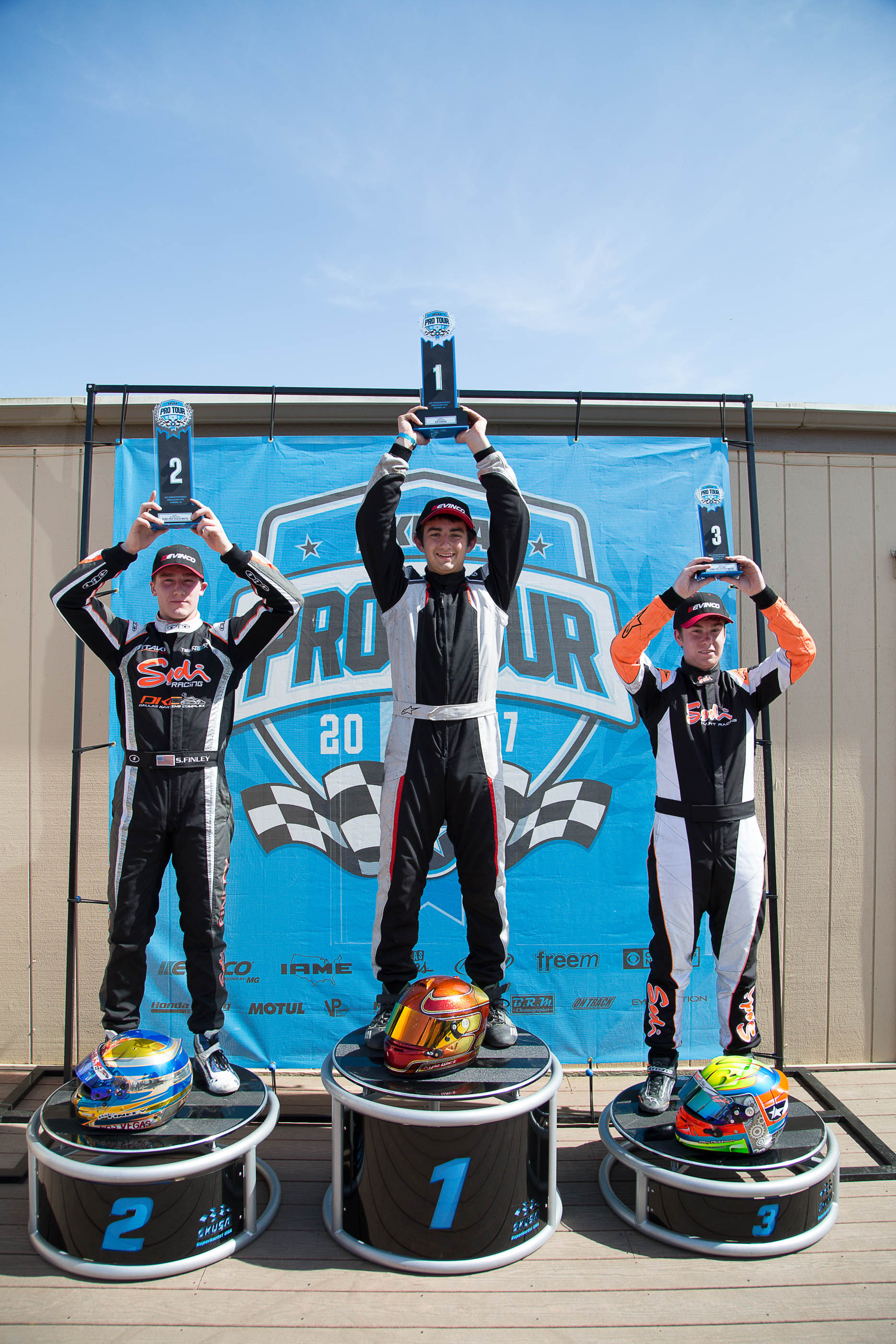 Kyle Wick on the podium for his first Pro-Tour win in S2
Photo by: On Track Promotions

May 11, 2017 – Rolison Performance Group (RPG) brought home the victory in S2 with team driver Kyle Wick at the SuperKarts! USA (SKUSA) SpringNationals in Sonoma, CA. The team had impressive showings in all categories entered at the second stop on the Pro-Tour series, including Mini Swift, X30 Junior, X30 Senior, S2, and S4. In addition to round four win, the team added three more podium finishes to their resume.

Kyle Wick battled his way to his first Pro-Tour victory of his career in S2. On Saturday, Wick scored a second-place finish in the final, landing himself on the podium for the first time that weekend. The young talent knew the top-step was in his sight, and returned on Sunday hungry for the win. He swept the day from qualifying on the pole with a lap time faster than the S1 Pro class, to the final, taking the win with a nine-second lead and earning his first Pro-Tour victory of his career.

In X30 Senior, six RPG drivers battled in the competitive field. Young pilot Jacob Gulick qualified second on Saturday, but due to penalties, he started the pre-final race on pole. He would finish in the top-15 in the main event later that day. Luke Selliken started his Saturday with a mid-pack qualifying effort, but worked his way through the field to a fourth-place finish in the final. On Sunday, he started last in the final, passing 35 karts to finish in the ninth spot, earning the hard charger award for the main event. Cedrik Lupien had the speed to battle at the front of the pack all weekend, finding himself on the podium on Saturday in the third spot, and in fourth place on Sunday. Samuel Lupien also showed great speed all weekend, running consistently in the top-15 throughout the event. He scored seventh and tenth place finishes in the main events. Kellen Ritter did not have luck on his side, but posted lap times in the top-10 nearly every session on track. Logan Cusson ran consistently throughout the event, showing improvements every session on track.

Victor Jimenez experienced a rollercoaster of luck in the S4 class. Jimenez battled throughout the day on Saturday, but suffered an unfortunate DNF in the final. He came back Sunday ready for redemption, and scored a fifth-place finish to cap off his weekend.

RPG team members Josh Pierson and Branyon Tiner flew the RPG flag in the Mini Swift category. Pierson battled his way from a 26th place starting position through the field to a 12th place finish in Saturday’s main. He earned a top-20 finish on Sunday. Tiner showed speed all weekend at his first Pro-Tour debut for the year, earning two top-15 finishes in the highly-competitive field.

The next event for the RPG squad will be round one of the Can-Am Karting Challenge, May 19-21st at Tri-City Kart Club in Richland, WA. Keep up with RPG’s success by following us on Facebook: https://www.facebook.com/RolisonPerformanceGroup/, Twitter: @rolison_pg, and Instagram: @rolisonpg.