NEWBERG, OREGON (October 24, 2014) – Success can be measured in many different ways. Reaching a specific lap time, lowering a fast lap by a certain amount, finishing in a certain position, and of course victory. Rolison Performance Group is always striving to help drivers reach their potential and goals, never wasting a minute in finding that extra tenth of a second, or the right set-up change to help the handling on the kart. This weekend was another example of the hard work and dedication the entire RPG team put in at the track, securing victory with Austin Versteeg, this time at the Cold Stone Rotax Pan American Challenge at the GoPro Motorplex in Mooresville, North Carolina. A total of six drivers from both coasts of the country and places in between gathered in one of the most respected tents in the paddock to compete in the final international Rotax competition in the Americas. 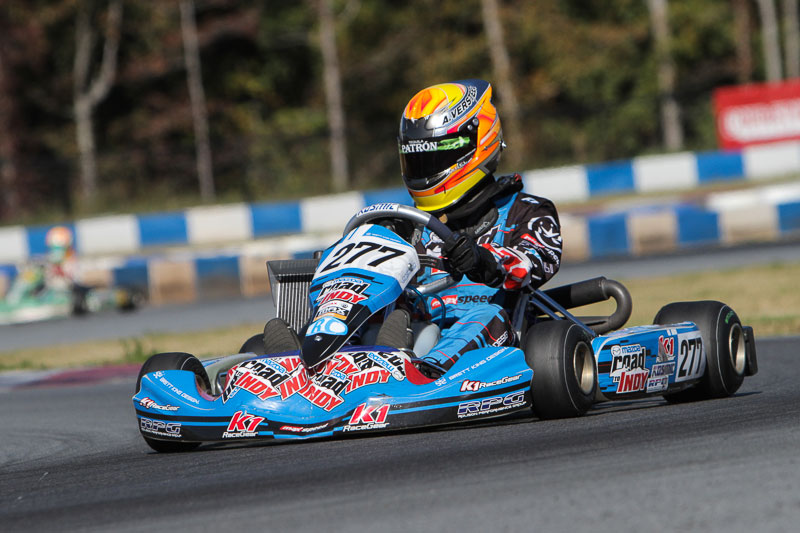 Rotax Challenge of the Americas and Rotax Can-Am ProKart Challenge Junior Max champion Austin Versteeg entered Mooresville, gunning for a third major title on the season and earn the 2015 Rotax Grand Finals ticket awarded to the race winner. Early on, Versteeg was within contention during practice until Qualifying rolled around. All competitors began with a new set of Mojo tires, however, one of Austin’s was defective and cost him valuable speed. He ended up 31st out of 34. Similar to what he did at the Cold Stone US Grand Nationals, Austin needed to climb his way in the heat races to have any chance at victory. Finishing 10th, 14th and 16th, Versteeg was able to salvage a 13th grid position for the Prefinal. As the 16-lap race continued, Austin’s pace and position improved, reaching the seventh spot and the inside lane for the start of the Final. Into the fourth position on the opening lap, Versteeg moved to third and began running down the leader who established a big advantage early. Fast laps of the race helped Austin close in on the leader and second place kart. Into second on lap 18, Versteeg dove deep inside of the leader at turn one after receiving the two laps to go signal. Clean and fast laps on the final two circuits gave Austin and RPG the Rotax Pan American Challenge victory. 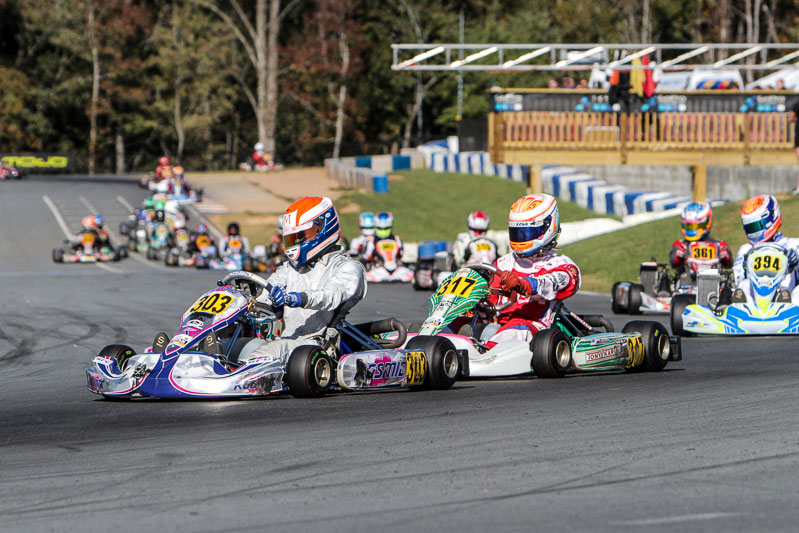 Senior Max driver Luke Selliken has continued to improve and further extend his education on and off the track. Finishing up his rookie Senior season, Selliken was in contention throughout the weekend in Mooresville. The Portland, Oregon driver was seventh out of 25 in the Qualifying session, missing out on the top-six that transferred to the Super Pole session by just seven thousandths of a second. Saturday morning warm-up went well, as Luke clocked in the second quickest lap. Contact however dropped Selliken to the tail of the field in the opening 10-lap heat race, as he worked his way back to 16th. Heat #2 fared better, improving two positions to fifth, only to be penalized three positions for contact. Luke kept his nose cone clean in the final heat, remaining in the seventh position, giving him a nine place grid position for the Sunday Prefinal.

Once again the quickest in morning warm-up, Selliken was primed to climb the order in the 16-lap event. Luke was into fifth by the completion of the opening lap, and by the halfway point found himself in the second position. He held the spot to the checkered flag, and was promoted to race winner with the first place driver receiving a penalty. Selliken started the Final from the pole position. Luke led the first six circuits until he attempted to fight off a pass attempt by the eventual winner, dropping a wheel and falling to fifth. The remainder of the race was a fight for third, with Selliken ending up with a respectable fifth.

Utah driver Walker Hess made his Senior Max debut, advancing up from the Junior Max division to record a respectable 11th result. Hess spent a weekend testing with RPG’s Mike Rolison in Oregon just prior to the Pan Am weekend. The extra time helped build up the young driver’s confidence, placing 15th in the timed qualifying session. Walker got his first wheel-to-wheel action in the three 10-lap heat races, remaining around the same position that he qualified to end up 17th on the Prefinal grid. A great start put Hess into the top-10 early on, however the rookie was shuffled back to the 12th position, running lap times just a few tenths off the leaders. Walker suffered a bad start, dropping back to 17th but never quit. He fought back to gain six positions to land in the 11th spot at the checkered flag. 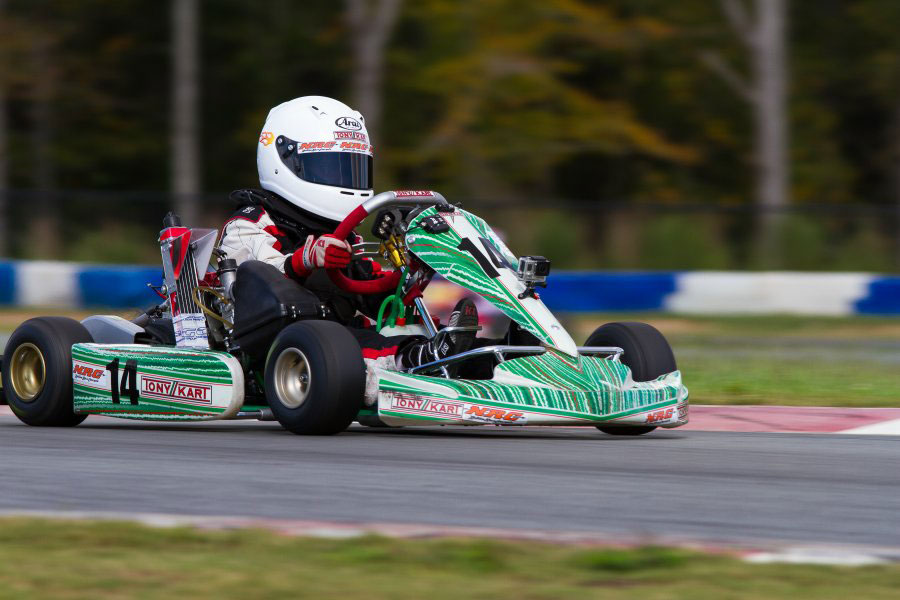 It was another stellar run for Micro Max driver Josh Pierson (Photo: Studio52.us)

Cold Stone US Grand Nationals podium finisher Josh Pierson was among the contenders in the Micro Max division, placing seventh in Sunday’s main event. The young Oregon driver, racing under the Neliton Racing Concepts/RPG banner, was eighth after qualifying in his second visit to the GoPro Motorplex facility. Josh slipped back to 18th at the start of Heat #1, but managed to finish 13th. It was a similar result in Heat #2, but a three-second starting penalty dropped him to 18th in the final classification. The final heat race was his best, able to get through the opening lap clean and race close to the lead group in eight place. Pierson started the Prefinal in 11th position, improving through the 12-lap event to end up seventh at the checkered flag. The Final was another up and down event, as Pierson was shuffled back at the start. He ran as low as 12th, but managed to climb his way into the seventh spot.

The event continued to serve as a growing weekend for 13-year old Dhyllan Skiba from Virginia. Making the transition from Mini Max to Junior Max can be a daunting task for young drivers, and Skiba continues to make progress. Against a very strong international field, Dhyllan gained wheel-to-wheel experience and continued to educate himself through the RPG trackside program. Skiba qualified 25th, but was unable to improve on that in the three heat races. Improving his starting position for the Final after a 28th result in the Prefinal, Dhyllan was unable to complete the opening lap. The positive from the weekend was the progression he made behind the wheel, improving his knowledge regarding the changes to the kart. 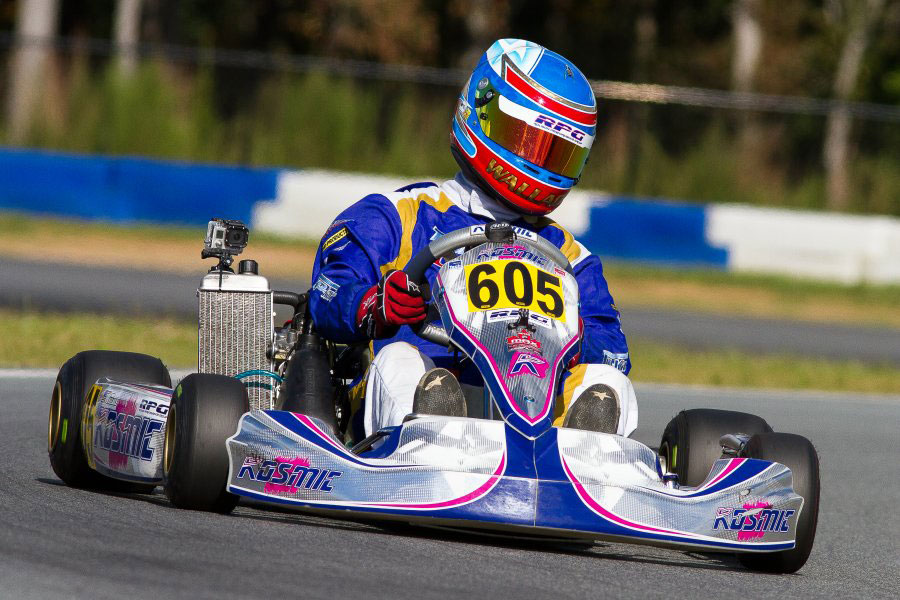 The same was accomplished for Masters Max driver Chad Wallace. A champion at the Rotax Can-Am ProKart Challenge, the Oregon driver learned a lot during the weekend, returning back to his native Carolinas. Wallace missed the set-up for qualifying, but fought back in the heat races to land third on the starting grid for the Prefinal. He fell to fifth early on but managed to gain one spot back by the checkered flag, holding the position through the 18-lap feature to finish fourth, just one position off the podium.

In November, Rolison Performance Group will travel to Las Vegas for the 18th running of the SKUSA SuperNationals outside the Rio All-Suite Hotel and Casino. One of the biggest events in the world, RPG has the experience and knowledge to take racers to the front for “Super Sunday”. Arrive and Drive programs are available in TaG, from Cadet and Junior to Senior and Master with P1 Engines power, along with all four Stock Moto categories with SwedeTech Racing Engines.

For more information on all the services that the Rolison Performance Group has to offer call 503.260.4514.

About Rolison Performance Group:
The Rolison Performance Group is a leading race team and prep shop in American karting, and is also a Rotax Service Center and a Kosmic chassis dealer. Owner Mike Rolison, known as”Roli” at the racetrack, has built a career coaching some of the best kart racers on the West Coast. Over the past decade, he has helped 100’s of drivers and mechanics improve their craft. Mike brings world class driving and coaching experience to every racer he works with. Drivers that have been part of the Rolison Performance Group team over the past few seasons have recorded a number of national victories, claiming Superkarts! USA Pro Tour and Rotax Challenge of the Americas titles. RPG provides trackside support and arrive-and-drive programs for many series, including the Florida Winter Tour, Challenge of the Americas, US Rotax Grand Nationals, Pan-American Challenge, SKUSA Pro Tour, Can-Am Karting Challenge and the SKUSA SuperNationals. The team is a Kosmic chassis and product line dealer and is proud to campaign karts on the regional and national stage.