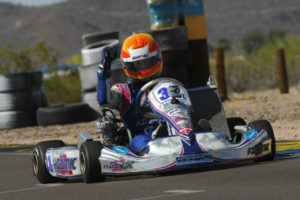 GLENDALE, ARIZONA (April 26, 2012) – Drivers from the growing Rolison Performance Group stable enjoyed a superb debut in the Superkarts! USA Pro Tour, riding on the momentum they had built during the winter season events. This past weekend’s MG Tires SpringNationals (April 20-22) was the kickoff to SKUSA’s Pro Tour and with the opener being held at the PKRA Formula K Raceway in Phoenix, Arizona, where RPG has a great run earlier in the year, they were looking for more of the same. Mike Rolison and his RPG squad performed brilliantly and drove to four podium finishes on the weekend, including three main event victories provided by Junior RPG driver Luke Selliken and Senior RPG pilot Joey Wimsett.

“These past four months have been a great start to the 2012 season for us and our drivers,” stated Rolison Performance Group President Mike Rolison.  “To complete our first SKUSA Pro Tour event with three wins is extremely pleasing.  One of the challenges that we faced this weekend was adjusting to the MG SKUSA tire. It’s a much softer compound to what we race in our Rotax events. The amount of rubber that was laid down on the track surface, due to the high entry numbers and the scorching surface temperature, had the track changing every session. As a team, we were able to set up the karts in the right direction as the event progressed, and it showed with Selliken and Wimsett both at the front.”

With his young student making his first SKUSA Pro Tour start, Rolison coached Selliken mentally leading up to the weekend in regards to what to expect with the change to the Parilla Leopard engine and MG Tires to his RPG Kosmic Mercury. The preparation paid off right away as Luke was among the top drivers during the Friday practice sessions. The start to Saturday’s events saw Selliken’s name at the top of the time sheet in qualifying, earning the pole position with a 45.639-second lap, scoring 10 bonus points in the process. In the first of two heat races, Luke lost positions early but climbed back to finish third. Selliken held the position in heat two after some serious racing early on to start inside row two for the main event. Battling within the lead group for the majority of the 16-lap main event, Luke and his RPG Kosmic came on in the late stages. Selliken took over the lead on lap 12 and posted the fastest laps of the race to the checkered flag and score the victory by two-tenths.

With a full day of action on Sunday, Rolison and Selliken put in the extra work on Saturday evening to make sure his RPG Kosmic was ready for a repeat. Qualifying for Round #2 saw Selliken at the top once again, improving to a 45.331-second lap to secure the pole position and a further 10 championship points. Under the tutelage of the experienced Rolison, Luke continued improving his pace as the day went on, as Selliken drove to wins of 2.2 seconds and 1.3 seconds in the heat races, leading all 16 laps. The 16-lap final was all Luke, as he drove away early and once again, put down his best laps of the race as the checkered flag drew near. Selliken’s best lap came on the final circuit, as he extended his margin of victory to 6.7 seconds to complete the sweep of the Round #2 action. Luke now leaves as the championship leader heading into the SummerNationals in July.

Rolison commented on Selliken’s performance for the weekend, “Luke did a phenomenal job all weekend long. He piloted the RPG Kosmic to victory on Saturday and to perfection on Sunday. Posting the fast lap of the race in the final stage is something we focus on under the RPG tent, and it helped him secure two wins this weekend. He went four-for-four in main events in Phoenix (he swept the Challenge of the America mains as well), something he can be proud of all year long.” 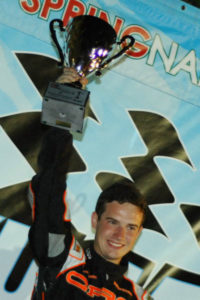 Another part of the puzzle to Selliken’s success has been working with current driver and S1 rookie Joey Wimsett. The 20-year old veteran was Selliken’s lead mechanic during the Gatorz Challenge of the Americas campaign where they earned the vice-championship. Wimsett strapped on the helmet himself this past weekend to pilot a CRG package in the headline S1 Pro Stock Moto division. With wrenching from his father and debriefing with Rolison, Wimsett entered as a rookie in the S1 Pro class having only limited shifterkart races in 2011. Qualifying sixth for Saturday’s round one action, Wimsett continued to maintain his pace throughout the day, unlike his competition. Advancing to fourth in heat one with fast lap honors, Joey placed second in heat two as he once again recorded the fast lap of the race. Starting the main from outside the front-row, Wimsett grabbed the lead as the race began. With an error-free race and consistent lap times, Joey was able to hold off the challenges of 2010 champion Fritz Leeseman to score the victory in his Pro Tour debut.

The following day, Wimsett was in the hunt once again. Despite not being able to improve his position in qualifying, ending up seventh in the session, he drove his way toward the front once again with finishes of third and second in the heat races, posting the fast lap of heat two. Starting once again from outside row one, Joey slotted into the second spot as the lights went out to begin the 20-lap final. As the race wore on, Wimsett battled hard for to retain the second position. Losing the spot near the midway point, he continued to fight for the spot despite some defensive lines being laid down by his rival, defending champion Daniel Bray. Crossing the line in third, the series Race Director promoted Joey to second after a penalty was assessed to the other driver. Tallying up the final points of the weekend, Wimsett finished second overall and took home a $500 check.

“I’ve known Joey for a long time now, and it’s great to see him excel at this level now,” commented Rolison on Wimsett’s performance. “He’s been a great asset to have as part of RPG and he showed this weekend why we have him on-board.”

Completing the RPG roster in Phoenix was Utah driver McKay Snow. The Junior rookie piloted his Kosmic in the TaG Junior class for just the second time after making his debut at the SKUSA SuperNationals late last year, getting the 2012 season started in Rotax Junior during the Gatorz events. McKay improved throughout the day on Saturday aboard his RPG Kosmic Mercury, coming up from 18th in qualifying to eighth after the two heat races. Some hard racing in the main gave McKay some much-needed wheel-to-wheel experience to learn more about the larger karts he is piloting since moving up from the Cadet level. After a grueling 20-lap feature, McKay ended up 12th, a very respectable position for his first Pro Tour day. On Sunday, Snow experienced an issue with his engine through qualifying and the first heat. After it was diagnosed, Snow was able to advance up to 14th by the end of heat two. McKay fought hard to break into the top-10, but finished the day matching his 12th place result from Saturday.

“For a first-year Junior driver, McKay is doing really well in the opening months of the season,” Rolison reflected on Snow’s performance. “Not having raced against the majority of the field, he grew more comfortable as the weekend progressed and he finished in the upper half of the field each day. There is no doubt we will see stronger results out of Snow when we visit his home track in July.”

The Rolison Performance Group team is now back in the Pacific Northwest, preparing for the start of the regional season. The RPG operation will be in Richland, WA this weekend (April 27-29) for the opening round of the Northwest Gold Cup series.

For more information on all the products and services that the Rolison Performance Group has to offer, visit www.rolisonperformancegroup.com . RPG has arrive-and-drive opportunities for the SKUSA Pro Tour SummerNationals on July 20-22 at the Miller Motorsports Park in Tooele, UT, as well as all Northwest Gold Cup events for 2012. Anyone interested in being part of this winning program should contact Mike Rolison via e-mail at roli5000@hotmail.com.