PORTLAND, OREGON (June 7, 2012) – The Rolison Performance Group is a non-stop entity for the 2012 season as the professional race team continues to hit events all along the western half of the United States, finding success at each stop. Its most recent trip garnered three events in three straight weekends, from Oregon, to Washington and ending in Utah. Led by veteran karter Mike Rolison, the operation’s mission of ‘creating championship drivers through desire’ showed during the three-week stretch with positive results.

“It was a busy month for us, but our drivers are committed to getting as much time under their belts as possible,” stated RPG’s Mike Rolison after returning home from Utah. “When we set our 2012 schedule, we committed to the Superkarts! USA and United States Rotax Max Challenge programs. If there is a race somewhere in the western half of the country for either, we are there to support it. Our drivers did a phenomenal job this month and we saw some great improvements. We also welcomed some new customers to our growing Arrive and Drive program with 100% positive feedback on the Kosmic equipment and RPG service we provided on the weekend.”

The three week journey began at the Northwest ProKart Challenge at the historic Pat’s Acres Racing Complex with RPG drivers picking up a number of wins. Joey Wimsett recorded four wins as he swept the S1 Pro Stock Moto and Senior Max divisions on the double-round weekend event. Jake Preston and Luke Selliken split the wins in Junior Max. Parker McKean was a double winner in the S2 Semi-Pro with Bruce McKean earning the victory on day two in S4 Master Stock Moto.

Rolison Performance Group was in full force at the second round of the Northwest Gold Cup event in Richland, WA

The crew packed up things and headed north to Richland, Washington for the second event of the Northwest Gold Cup series at Tri-Cities Kart Track with 14 drivers competing under the RPG banner. Half of the drivers drove to podium finishes on the weekend. Kyle Wick doubled up with wins in the Junior Max division and now leads the series championship. Jake Preston added two top-five finishes as well. Conner Wick scored the main event victory in a photo finish for the Micro Max category. The Morgan brothers, Mathew and Morgan, were top-five in both main events. Mathew was runner-up both days while Mason placed third and fifth. Parker McKean and Geoff Roberti each earned a third place finish on the weekend in the competitive Senior Max division that fielded 24 drivers. Rounding out the driver roster from the weekend included Bruce McKean (Shifter), Don Becklin (Shifter), Max Mulkey (Senior Max), Joe Criscione (Senior Max), Laura Shearer (Junior Max), and Cooper Becklin (Micro Max).

“The Tri-City weekend was a busy one for us under the RPG tent but it was a successful one. We had a number of fast laps in qualifying and those who did not qualify well raced their way forward. They all did their best and learned from the different experiences they faced. That’s all we can ask for. After the weekend, I had one comment from a new customer that it was the most fun they had at any karting event in nearly two years. That’s what it’s all about,” commented Rolison. 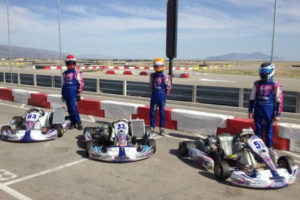 Utah was the third stop on the RGP three-week expedition, competing at the Rocky Mountain ProKart Challenge event in preparation for the SKUSA Pro Tour SummerNationals in July. RPG had four drivers on-hand in the S1 Pro Stock Moto and TaG Junior categories. Joey Wimsett, SKUSA SpringNationals race winner, was runner-up in both days of competition behind the current Pro Tour point leader. Luke Selliken, double SpringNationals winner in the TaG Junior, duplicated the same feat during the SummerNationals test event as he dominated all weekend. The RPG trio of Junior racers on hand, including Jake Preston and McKay Snow, scored a 1-2-3 finish in Sunday’s main event. Preston was runner-up on Saturday as well with Snow earning victory in the Utah State Championship Rotax Junior class running at the same time.

Rolison was happy to end the trip with success, “Utah was a great weekend for us. We were there one year ago for the Rotax Grand Nationals and earned some success. With the SKUSA rules and different tires, we wanted to make sure we had a baseline setup heading into the July. Now, we will focus our attention on the upcoming Northwest Gold Cup events and preparing for the Rotax Grand Nationals in August with a test in South Bend in a few weeks.”

The Rolison Performance Group will be trackside next on June 15-17 for the Northwest Gold Cup series event at Portland Karting Association track in McMinnville, Oregon. The following week will be a trip to the Michiana Raceway Park for three days of testing at the site of the 2012 United States Rotax Grand Nationals. Two straight weekends of racing follows with the next stop on the Gold Cup schedule, racing at the Puget Sound Go Kart Association kart track in Tacoma, Washington on June 29-July 1. The long stretch will end in Medford, Oregon for the second event on the Northwest ProKart Challenge on July 6-8. To learn how you can be part of this unique and professional race team, visit www.rolisonperformancegroup.com for more about their services and products available.