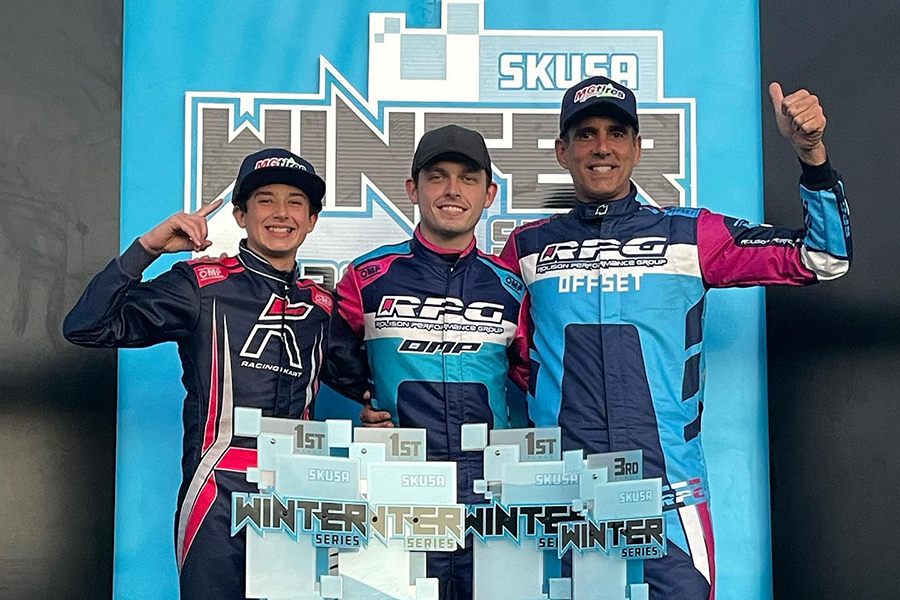 The Rolison Performance Group closed out the 2022 edition of the Superkarts! USA Winter Series over the February 11-13 weekend, contesting the final two rounds of the championship at the AMR Homestead-Miami Motorplex presented by MG Tires. The OTK USA race team spent the weekend prior at the Homestead, Florida circuit testing and competing in a local club event in preparation for a full attack on the 7/10-mile circuit in the clockwise direction – opposite of the opening rounds of the series in January. Following the final checkered flag of the SKUSA Winter Series finale event, RPG collected a total of five victories, eight podium finishes and one championship to start off the 2022 season with momentum. 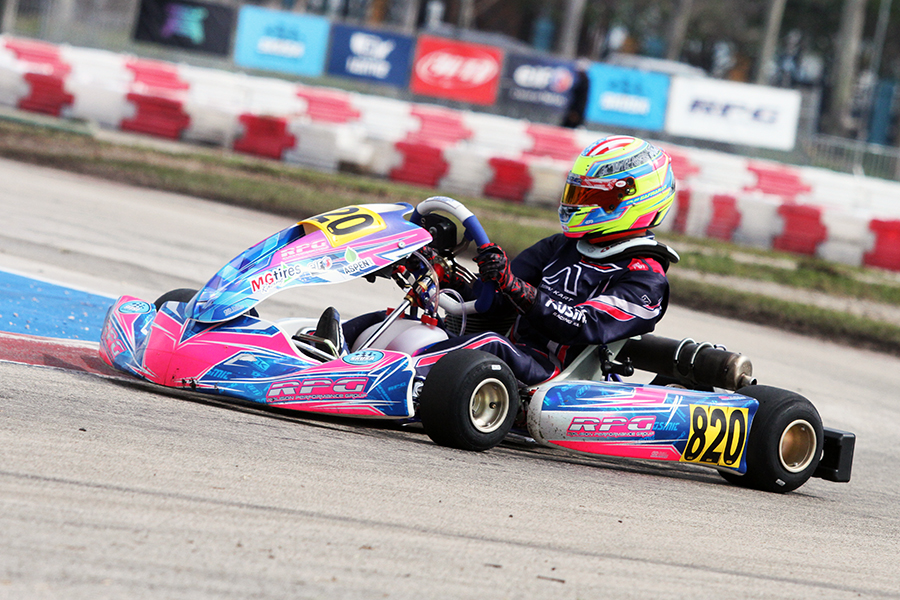 Caleb Gafrarar swept the Junior main events on the weekend to claim four victories, along with the KA100 Junior championship (Photo: eKartingNews.com)

“Our start to the 2022 season was very successful and trying,” stated Rolison Performance Group owner Mike Rolison. “The changing weather conditions each weekend tested our drivers, mechanics, coaches and families. Everyone pulled together and we were able to grab several highlights on and off the track.”

Leading the way on the weekend was RPG Junior driver Caleb Gafrarar, who was able to record four victories in the four main events on the weekend for both X30 Junior and KA100 Junior. Gafrarar began the weekend with a sweep of Round Three in KA100, setting fast time in qualifying and winning the Prefinal on-track. He was shuffled back early in the Final, only to power his way forward and reclaim the top spot. Then he drove away to an 8.2-second advantage at the checkered flag. He was just 73 thousandths away from a sweep on Sunday, missing out on fast time in qualifying on a wet track by that much. He returned in the Prefinal to drive away to the win, and remained at the front the entire Final, establishing a 17-second margin of victory for his third win in the four rounds. Those results helped him to become the 2022 SKUSA Winter Series KA100 Junior champion.

Gafrarar was also one of the quickest all weekend in the X30 Junior division aboard his RPG Kosmic machine. He narrowly missed out on setting fast time in Saturday’s qualifying session and finished fourth in the Prefinal with fast lap of the race. Gafrarar would jump up to the lead before he was shuffled back to fifth. That sparked a charge back to the front where he reclaimed the top spot. He was leading the race when a red flag condition occurred, and the race was called. It was his first win in the category for 2022. Sunday was up and down, then back up as Caleb qualified fourth, however, the team decision to stay on rain tires on a drying track cost him speed and positions, dropping to eighth in the shortened Prefinal. Gafrarar was the driver on the move in the Final, climbing his way forward with each lap and eventually taking over the lead on lap 17. From there, he fought off challenges, including a back and forth battle on the final circuit with a bold move in the penultimate corner to come away with the victory, his second in the class and fourth on the weekend. The results classified him third in the championship chase.

Adding to the win total and making his 2022 debut was four-time SKUSA Pro Tour champion and three-time defending SKUSA Winter Series title winner Ryan Norberg. The recent SKUSA SuperNationals 24 winner shook off the one-month worth of rust to claim victory in Round Three action. He was among the top-five contenders all day and shined in the Final by leading 18 of the 22 laps for the victory. Norberg was strong in both the wet and the dry for Round Four, qualifying second on a wet track before he was shuffled down to sixth on a challenging drying track. He bounced back in the Final, grabbing three spots to end up on the podium in third. 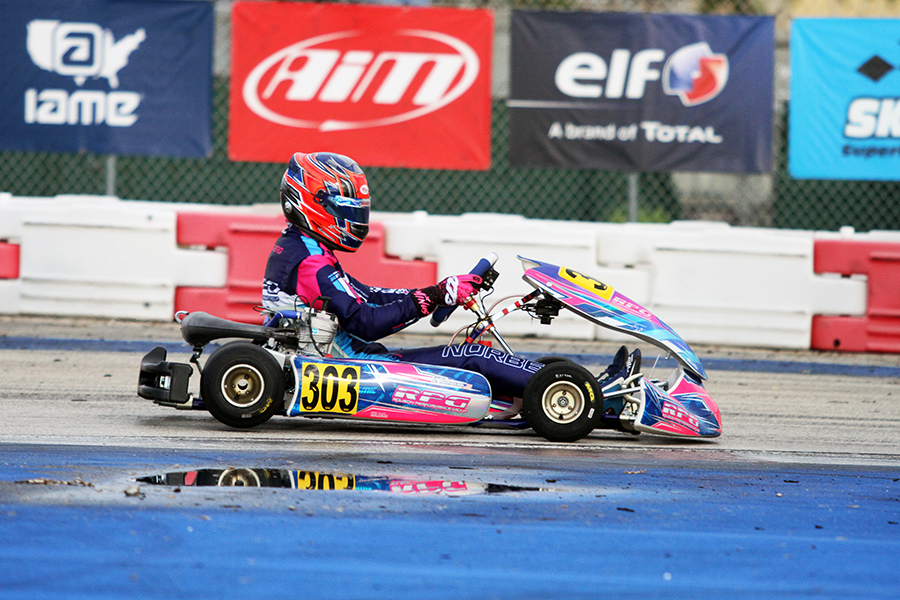 Ryan Norberg returned to action for his first victory of the 2022 season along with a third-place result in X30 Senior action (Photo: eKartingNews.com)

In total, all five of the RPG drivers in the X30 Senior division placed inside the top-15 on the weekend. Defending SKUSA Pro Tour champion Hannah Greenemeier was fifth in Saturday’s Final and ended up eighth on Sunday – recording the fast lap of the race. Those finishes helped her to claim the third step on the championship podium. New RPG driver Paul Bocuse was 15th on Saturday and improved Sunday, advancing seven positions to end up sixth in the Final. Nate Cicero recorded his best result of the series in Round Three with a 10th place finish. Contact after racing in the lead group on Sunday diminished his result, placing 24th. Florida driver Wes Duchak was able to overcome adversity and claim a hard charger award. Issues in the Prefinal put him 26th on the grid, with Duchak cutting that in half to finish 13th in the Final. He came back the next day to finish top-15 again, ending up 14th.

X30 Master driver Mario Barrios put together a string of podium finishes at the series finale. Barrios improved to third place in the Round Three main event. Sunday’s Round Four was a two-position gained performance, once again placing third to finish the series with four podium results. His finishes placed him fourth in the final championship standings. Joining Barrios was South Korean driver S.H. Moon. Throughout the weekend, Moon gained experience in his first SKUSA start. He would place ninth on Saturday and improve to seventh on Sunday.

Gia Cicero led the RPG contingent on the weekend in the KA100 Senior class. Cicero recorded her best back-to-back performances, placing inside the top-five each round. Round Three on Saturday saw Cicero put down the fast laps of the race, improving seven positions to end up fifth. She was once again among the quickest karts on the track Sunday after getting pushed back to 14th early in the Final. She advanced her way up the order and was able to record her best result of the series in the fourth position. Washington driver Kieran Rogers was inside the top-20 all weekend, as was Grace Hemmerde. Rogers had a best result on the weekend of 11th on Saturday, slipping down to 16th. Hemmerde had her overall best weekend going, starting strong with a 13th place finish in Round Three. Unfortunately, contact took her out of competition on Sunday.

The lone driver for RPG in the Micro Swift category was Jackson Gibson. The second-year driver was in a battle mid-pack all weekend long. He ran as high as 10th Saturday, ending up 11th in the final classification. Gibson fought forward again on Sunday, coming from 20th on the opening lap to end up 13th. Teddy Musella continued the momentum from his first weekend with RPG in January, into February with another top-10 finish in X30 Junior competition. He was in the fight for a top-five result in Round Three until slipping down to 11th by the checkered flag. Musella rebounded the following day to compete for a top-five finish once again, ending up in the ninth spot. 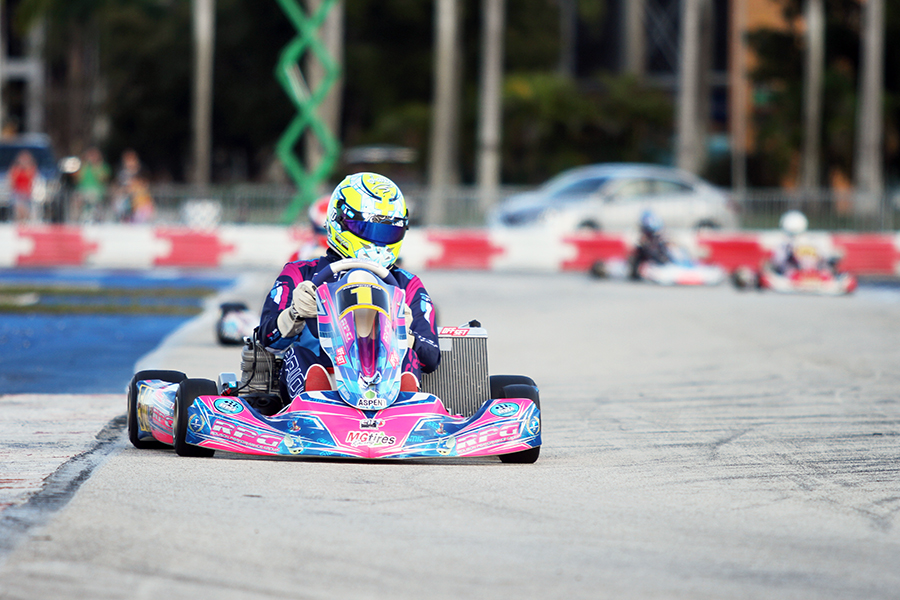 “Congratulations to Caleb and Ryan on their victories, along with Mario securing four straight podium finishes in four rounds,” continued Rolison. “I’m excited about where everyone can improve for the future, as I see another successful season on the horizon. Thank you again to everyone under the tent for their hard work and dedication to a great start to the 2022 season.”

The team has made a quick turnaround, heading to the west side of the Sunshine State for the second event of the ROK Cup USA Florida Winter Tour. Rolison Performance Group is trackside at Tropicana Field in St. Petersburg, Florida over the February 17-20 weekend. Two weeks later, RPG begins its quest for more victories and championships at the United States Pro Kart Series opener at the Orlando Kart Center on March 4-6.