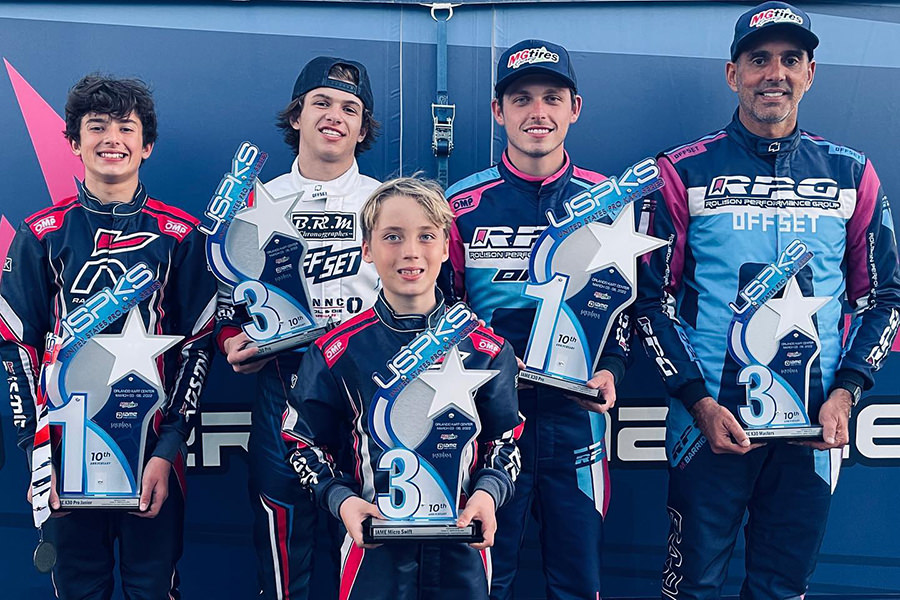 The Rolison Performance Group remained in the state of Florida for its fifth event of the 2022 season, taking part in the record-setting United States Pro Kart Series Southern Grand Prix at the Orlando Kart Center. The March 4-6 event hosted the opening two rounds of the 2022 championship program at the Orlando, Florida facility, welcoming over 300 drivers. RPG fielded 21 drivers to compete in all seven IAME categories, with drivers in contention all weekend in each division. In total, RPG drivers collected nine podium finishes, including three victories. 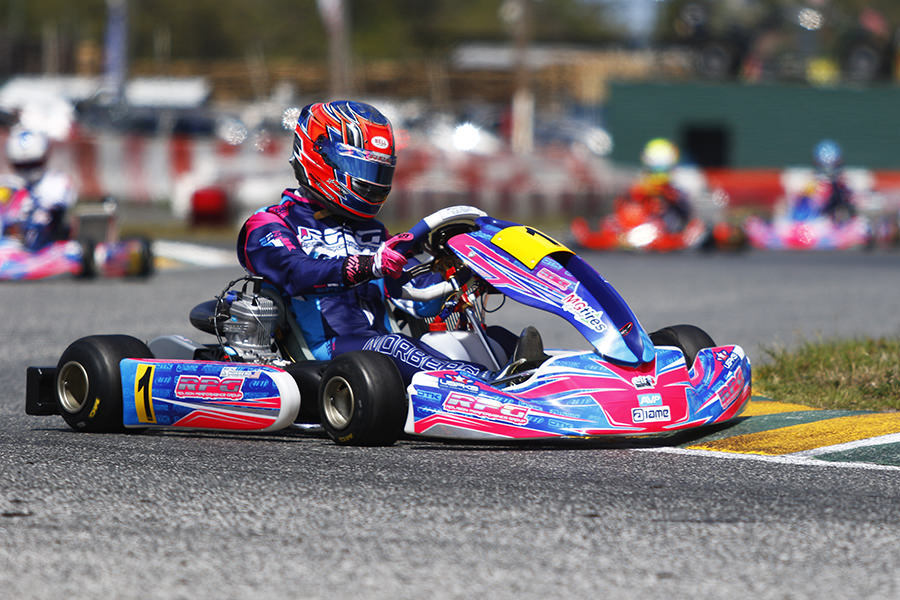 Defending USPKS X30 Pro champion Ryan Norberg carried the #1-plate to the top of the podium both rounds at his home track. Norberg was near perfect all weekend aboard his RPG Kosmic, and when challenged, responded with consistent speed. The Florida driver set fast time in qualifying for Sunday’s action and won both of his Prefinals before going on to win each main event by over one-second to begin his title defense. With his results, Norberg took home the top prize of $5,000 for the weekend purse. 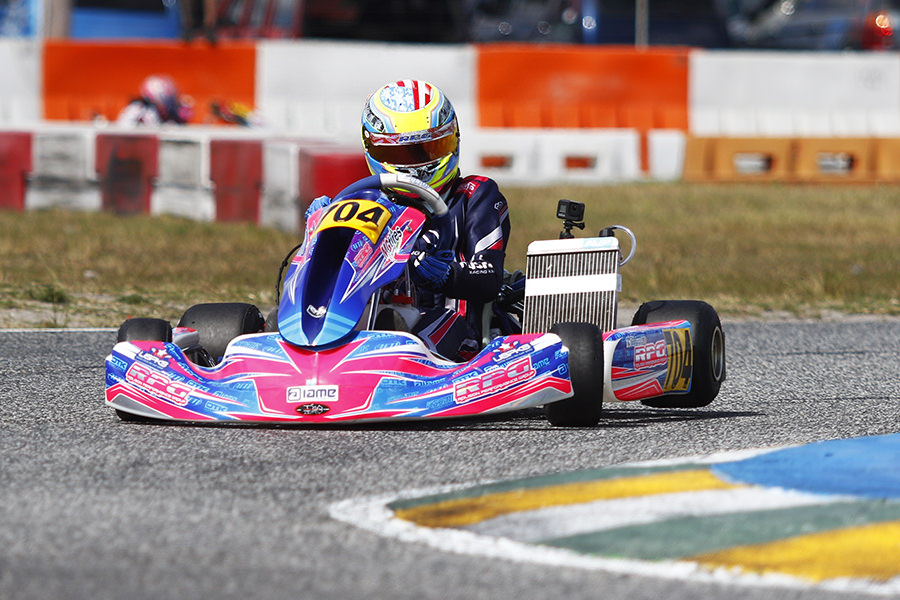 In total, RPG fielded seven drivers in the headline division. Fellow Orlando driver Paul Bocuse was among the top contenders all weekend. Bocuse qualified P1 for Saturday’s opening round of action, finishing third in the main event. He was poised for a top-five result on Sunday until getting shuffled back, finishing 11th. RPG had four drivers finish in the top-10 in Saturday’s Final, including Nate Cicero in fourth and Hayden Jones placing ninth. They both returned for another top-10 result on Sunday, placing eighth and seventh respectively. Donovan Bonilla and Wes Duchak each recorded a top-15 finish. Bonilla improved from 23rd on Saturday to 14th Sunday. Duchak was 13th in Round One and was shuffled back to 24th in Round Two. The weekend was the debut of Nolan Allison moving from KA to X30. He showed progress throughout the weekend. It began with a tough 26th place result before running top-five in the Prefinal on Sunday. Contact in the main event on the opening circuit took him out of contention.

RPG driver Caleb Gafrarar earned three podium finishes in the four main events he contested over the weekend in the two Junior divisions. Gafrarar was at the front of the field all weekend in the X30 Junior division aboard his RPG Kosmic. Saturday was an amazing last lap pass for the victory, his third in the series since moving to the Junior ranks last year. Gafrarar fought for the victory once again on Sunday, taking the lead on the final circuit only to be overtaken in the final corners, coming across in the second position. His two main event results helped him to earn the $2,500 top prize for the weekend purse in the category. Gafrarar was one of a few drivers to compete in both Junior classes. He had a sweep on-track in Saturday’s KA100 Junior class. A controversial decision following last lap contact took the win away and placed him 35th in the results. Gafrarar put that decision behind him and fought for the victory once again Sunday. A slight error cost him the lead on the final circuit, crossing the line in third. 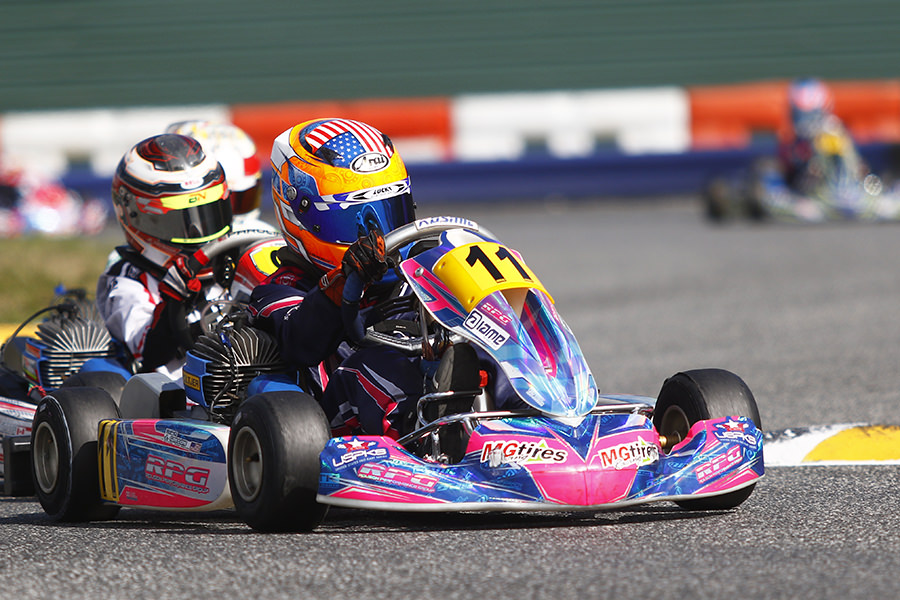 All three of the RPG drivers in X30 Junior finished inside the top-15 in both main events. Teddy Musella continued a strong start to the 2022 season, placing eighth on Saturday and improved to fifth on Sunday. Ernesto Rivera made his RPG debut at the USPKS weekend, improving his position both days in the main events. Rivera ended up 15th in Round One and advanced six spots to 14th in Round Two.

Two other drivers were in the KA100 Junior class alongside Gafrarar. Graham Trammell recovered after getting shuffled back to post a ninth-place result in Round One. The following day did not end well with contact dropping him down the order and then later removed from the results for an issue on-track involving another driver. Emma-Kate Scarbrough made her 2022 debut with RPG with a top-15 result. After placing 27th on Saturday, Scarbrough improved on Sunday to end up 14th.

The three drivers for RPG in the X30 Masters category were top-10 performers all weekend long, earning two podium results. 2021 championship runner-up Mario Barrios was a top performer on Saturday, winning the Prefinal and ending up on the podium in third. Contact in the Final on Sunday put him behind early, fighting back to finish seventh. Danny Robertson provided the other podium result. Robertson was eighth on Saturday and took advantage of opportunities in front of him to drive to a runner-up result in Sunday’s Final. Rob Maier was consistently toward the front end of the field all weekend long. Maier placed fifth on Saturday before ending up eighth on Sunday for a double top-10 weekend in Orlando. 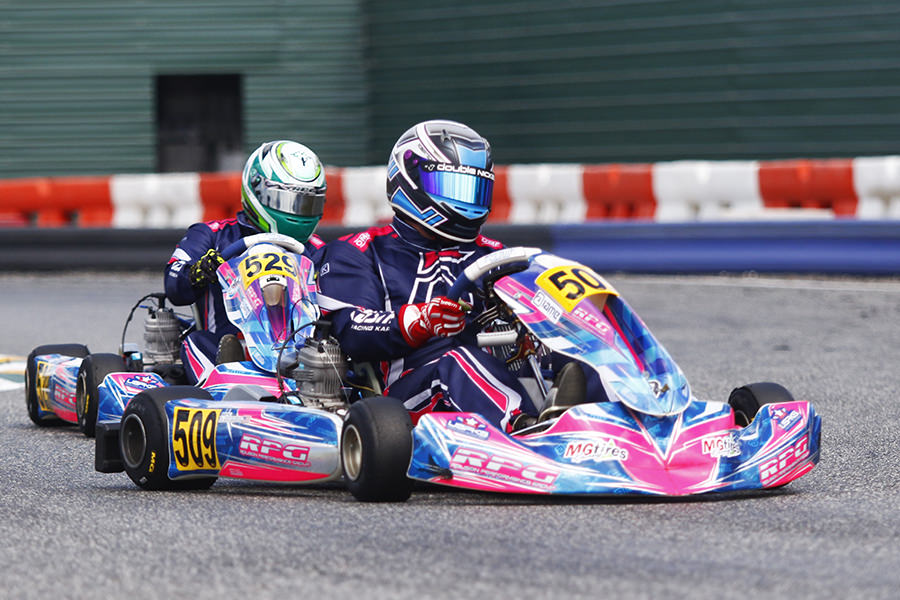 Jackson Gibson was the lone RPG driver in the Micro Swift. Saturday’s action worked in Gibson’s favor as he improved five spots to the win in the Prefinal. He led the field to the green flag in the Final, and after an epic battle, finished third to earn his first series podium finish. Gibson was toward the front once again on Sunday, only to be shuffled back in the closing laps of the Final to end up eighth.

The drivers in KA100 Senior division showed the pace to contend for podium and victories all weekend long. The best finish of the weekend came from Gia Cicero, coming off two top-five results at the SKUSA Winter Series. Cicero improved to fifth in the Sunday Final after finishing 10th on Saturday. Chase Hand enjoyed an up and down weekend in his Senior debut at the USPKS. Hand was among those in the top-10 all day on Saturday, slipping to 11th in the Final. He was one lap away from a victory on Sunday in a wild day of action. Hand won the Prefinal EVEN race to sit on the front row for the Final. He sat fourth for much of the main event, slipping up for the lead as they reached the white flag. Entering turn one, contact spun Hand around, and thankfully, he kept it off the wall to continue and finish eighth. Grace Hemmerde was able to bounce back after missing the transfer position to the main event on Saturday. Hemmerde started the Sunday Final in 39th after earning a spot through the Last Chance Qualifier. She then went on to improve 16 spots to end up 23rd in the 18-lap Final.

Two drivers carried the RPG Kosmic colors in the Mini Swift division. Alan Bonilla Espinosa led the way with an 18th result after placing 20th on Saturday. Lillian Scarbrough made her first start after graduating from Micro level, making the main event without having to race in the Last Chance Qualifier. Lillian finished 21st and 23rd over the two rounds of racing. 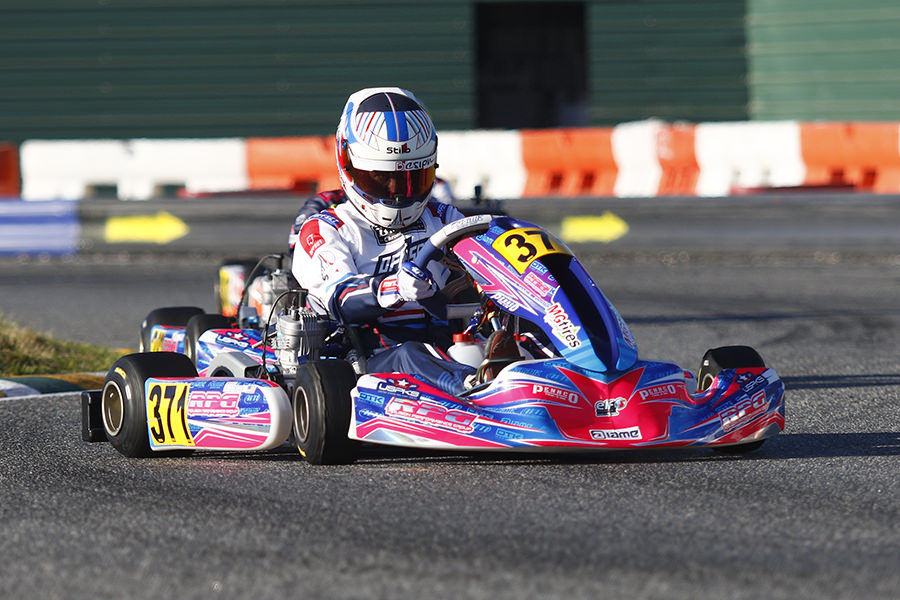 Paul Bocuse set fast time in qualifying and earned his first podium result in the X30 Pro category, placing third in Round One (Photo: eKartingNews.com)

“I would like to thank all the families and the entire staff, including the mechanics and driver coaches for the hard work over the last two weeks in Orlando,” stated Mike Rolison of Rolison Performance Group. “The extra time and effort with our test weekend led to pole positions in qualifying and eventually victories and podiums on race weekend. This will help carry the momentum into our third weekend at OKC to close out our winter months in Florida before we turn to the national schedule across the country.”

The team remains at the Orlando Kart Center for the series finale of the ROK Cup USA Florida Winter Tour over March 10-13. Rolison Performance Group will then take to the NOLA Motorsports Park with the 2022 Superkarts! USA Pro Tour opening up with the SKUSA WinterNationals on April 1-3. The second stop of the United States Pro Kart Series is scheduled for the April 29-May 1 at the GoPro Motorplex in Mooresville, North Carolina.