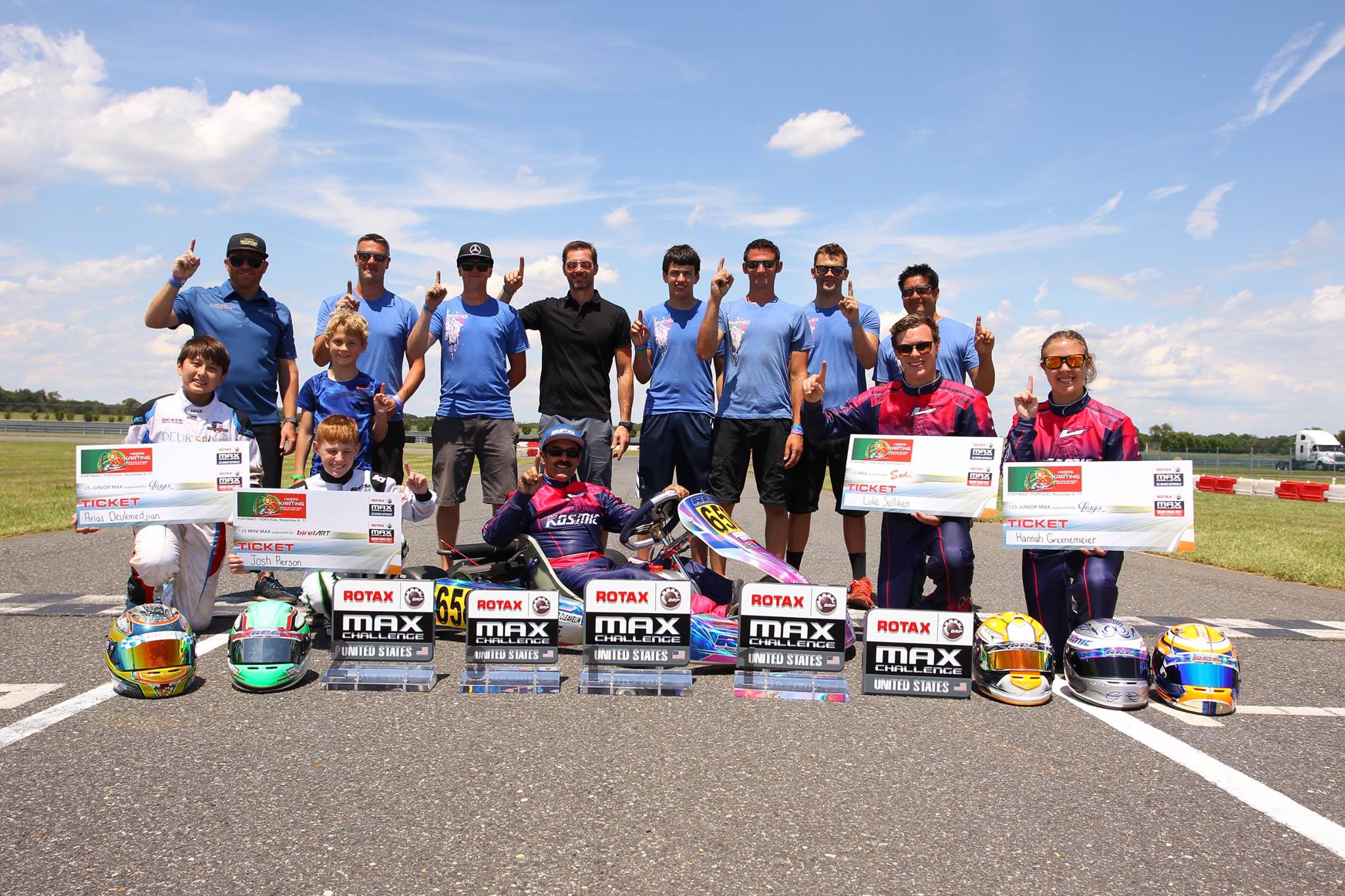 RPG team celebrates their success after a dominant weekend in New Jersey.

July 5, 2017 –Rolison Performance Group (RPG) returns to the west side after a weekend full of success at the US Open/Rotax US Grand Nationals at New Jersey Motorsports Park. The squad dominated the circuit all weekend, bringing home three national championships, earning five Rotax Grand Finals tickets, and multiple podium finishes, making it a dream weekend for the team.

It was an excellent weekend of driving for Mini Max pilot Josh Pierson, setting the pace for the field in qualifying. After a fifth-place finish in the first heat race, Pierson came back on Saturday ready to get back to the front row. He turned up the intensity and never looked back, sweeping the rest of the weekend and scoring the victory in the final, earning a national championship and his first ticket to the Rotax Grand Finals. Young Micro Max pilot Graham Trammell continued to make improvements in his driving and lap times all weekend, gaining more experience each session on track in his first year on the national circuit.

In Senior Max, Luke Selliken made a last minute entry to the Millville, New Jersey karting event, proving that the RPG driver coach and karting veteran continues to hone his skills. Starting with an off-pole qualifying effort, he continued to post strong results throughout the heat races, earning the pre-final victory and scoring himself a front row starting spot in the final. Once the green flag flew in the final, Selliken broke free from the pack with another driver and at the halfway point took the lead and never looked back, driving himself to a national title and his third trip to the Rotax Grand Finals. Teammate Jacob Gulick began his weekend with a mid-pack qualifying position, but continued to improve throughout the heats. The pre-final brought some bad luck for Gulick, but he pressed on and gained 10 spots in the final, coming home with a top-10 finish, a solid effort for the rookie senior driver.

In Junior Max, Hannah Greenemeier continued her impressive season by kicking the weekend off with a third-place qualifying effort. She battled hard throughout the heats and pre-final, and with a stellar drive Sunday she found herself with a second-place finish in the final, earning a spot on the podium and her first Rotax Grand Finals ticket. Arias Deukmedjian of Deukspine Racing joined the RPG squad for the event. He began his weekend with a sixth-place qualifying effort in the competitive Junior field, and continued to move up through the top-10 in the heat races posting fast times in multiple flights. On Sunday, Deukmedjian once again had the speed he needed to move himself into the lead pack, bringing home a third-place finish and a Rotax Grand Finals ticket.

Masters Max driver Billy Cleavelin came into the New Jersey event fresh off a championship from the Rotax Challenge of the Americas winter series. Hungry for another championship, he started his weekend with a solid sixth-place qualifying effort. Cleavelin continued to gain the speed he needed to move up through the field, and on Sunday went from a fifth-place starting position to a victory in the main event, earning his second championship of the year. Cleavelin also earned a Rotax Grand Finals ticket, but deferred the ticket to second-place due to already qualifying through Challenge of the Americas earlier this season.

Team owner Mike Rolison commented “I’m so proud and impressed by all our drivers and staff this weekend. I’d like to thank all our RPG families that have supported us through 2017 and a special thank you to Alex Vincent and our veteran staff for their countless hours and dedication to this program. These men and women are the difference makers!”

RPG will gear up for its next events, round four of the SuperKarts! USA California Pro-Kart Challenge, July 7-8 in Santa Maria, CA, followed by round two of the Can-Am Karting Challenge, July 21-23 in Chilliwack, BC. Follow RPG’s success at both events by following us on Facebook: https://www.facebook.com/RolisonPerformanceGroup/, Twitter: @rolison_pg, and Instagram: @rolisonpg.