ROLISON PERFORMANCE GROUP LEADS THE WAY AT CAN AM KARTING CHALLENGE 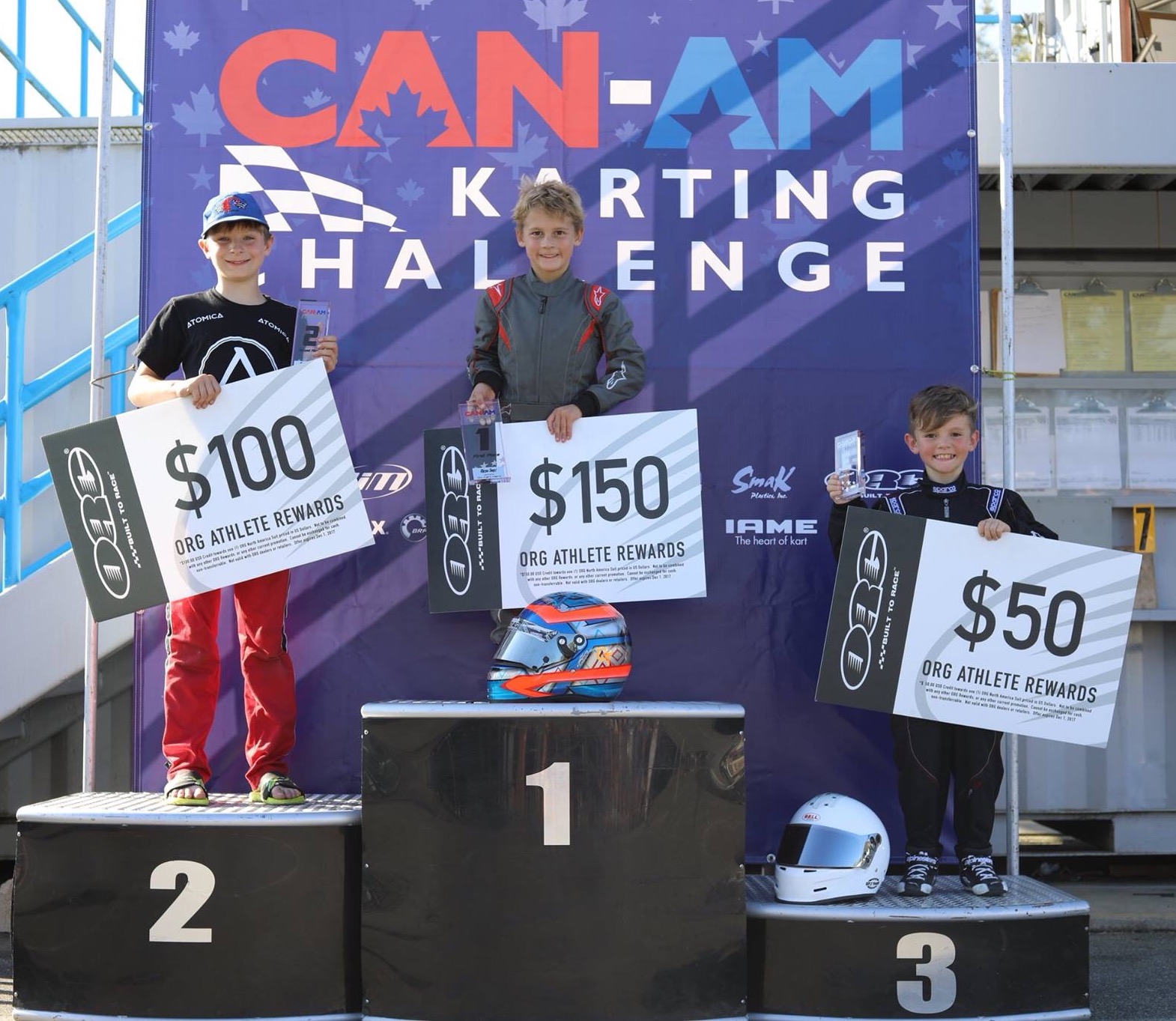 August 3, 2017 – The Rolison Performance Group (RPG) squad travelled north across the border for the second round of the Can-Am Karting Challenge, July 21-23rd at Greg Moore Raceway in Chilliwack, BC. The team was challenged with both wet and dry throughout the weekend, but it did not stop them from continuing their winning streak, collecting 12 more wins to add to their stacked resume.

The Masters Max drivers were the first to hit the track for the event. Nik Goodfellow and Mike Groff represented RPG on track in the Masters category. The pair kicked off the event on Saturday with a one-two qualifying effort, making it an RPG front row for Saturday’s pre-final. Goodfellow would end his Saturday with a third-place podium finish, followed closely behind by Groff with a fifth-place finish. On Sunday, Goodfellow came back with more speed and challenged for the top spot, finding himself standing on the podium for the second time of the weekend after snagging the win in the final. Groff maintained his consistent driving and brought home another fifth-place finish.

In Junior Max, standout Hannah Greenemeier swept the weekend from start to finish. Starting off the weekend with a pole position in Saturday’s qualifying, she never looked back, putting on an incredible show and taking the win home on both Saturday and Sunday. Rory McKean joined RPG for the event, travelling all the way from Kenya to race with the team. He earned two seventh-place finishes in the finals, a great run for his first time on the Chilliwack circuit.

Matthew Taskinen, Kellen Ritter, Jacob Gulick, and Colby Wallace all flew the RPG flag in Senior Max. It was an RPG-sweep of the podium in Saturday’s final. Taskinen secured the win by three seconds, followed by Ritter in second and Gulick in third. On Sunday, Taskinen was untouchable once again, leading from flag to flag in the final and bringing home his second win of the weekend. Ritter started the final at the tail end of the field, driving his way through the field to a sixth-place finish. Gulick followed behind his teammate in seventh. Wallace faced a stroke of bad luck on Saturday, but came back to battle on Sunday, finishing 13th in a competitive Senior field.

In Micro Swift, Graham Trammell was the driver to beat all weekend. On Saturday, he battled for the win from a second-place starting position in the pre-final. When the checkered flag flew, Trammell crossed the line in first-place. Sunday led to a clean-sweep for the young driver, qualifying on the pole and never looking back, driving to the win in the final. Brody Nieto joined the RPG squad for his first Can-Am race of his career. He made huge improvements throughout the weekend, dropping his lap times and becoming more competitive each session on track. Nieto found that his hard work paid off as he landed himself on the podium with a third-place finish in Sunday’s final. Teammate Josh Pierson earned the win both days in the Mini Swift category, continuing to put in as much seat time as possible for his upcoming trip to the Rotax Grand Finals in Portugal.

Four RPG drivers pulled double-duty on the Canadian circuit in the LO206 categories. Graham Trammell felt he had more to give on track, competing in the LO206 Cadet class in addition to Micro Swift. He faced race-long battles with his competitor in both main event races, which led to Trammell taking home the LO206 Cadet win both days. Josh Pierson put in more seat time running in LO206 Junior. He swept the weekend once again, winning Saturday’s final by nearly three seconds. On Sunday, Pierson faced some competition for the win, having to pull out all his tricks to secure the win by a small margin of one-tenth of a second. Jacob Gulick and Colby Wallace also pulled double-duty for the weekend in the LO206 Senior category. Gulick earned a fifth-place finish in Saturday’s final. He came into Sunday with newfound speed, and battled for the in the top-three for the entire final. He attempted a last lap pass in one of the last turns, but found himself in a drag race to the finish line, crossing the line in the third spot. Wallace set the pace for the field on Saturday with a stellar pole position qualifying run. Following his qualifying run was some bad luck he could not shake, but came back on Sunday ready to rock. He drove himself to a seventh-place finish in Sunday’s final.

RPG now heads to the last round of the SuperKarts! USA Pro Tour, SummerNationals, August 11-13th at New Castle Motorsports Park in Indiana. Follow RPG’s success at both events by following us on Facebook: https://www.facebook.com/RolisonPerformanceGroup/, Twitter: @rolison_pg, and Instagram: @rolisonpg.