NEWBERG, OREGON (March 13, 2013) – Rolison Performance Group is quickly becoming the operation to work with if you have the drive and ambition to compete at the Rotax Grand Finals. Helping guide two drivers to the event in 2012, Mike Rolison and his staff helped lead three drivers to the Rotax Challenge of the Americas championships at the CalSpeed Karting facility in Fontana, California this past weekend (March 8-10) and earn tickets to this year’s event in 2013. Phillip Arscott, Blaine Rocha and Sting Ray Robb bested the Senior Max, Junior Max and Mini Max fields to earn the first of many titles in 2013 for Rolison Performance Group, with a total of seven drivers finishing on the podium in the series championship.

“I couldn’t be happier in what we’ve accomplished thus far in 2013. The drivers and staff under the tent this past three months worked super hard to achieve the results we have, and the steps everyone has gone to get there,” commented Mike Rolison of RPG. “Phillip, Blaine and Sting Ray are talented drivers, and I couldn’t be more excited to help them earn their championships and tickets to the Rotax Grand Finals. I want to thank all the drivers and their families for supporting me and RPG through this first quarter of racing in 2013. Also a special thank you to Andy Seesemann and all his staff for putting on another stellar Challenge series. The entire group of drivers here did an amazing job this winter, and the summer months should be great for everyone as I think we will see more drivers from Rolison Performance Group earning tickets to NOLA in November.” 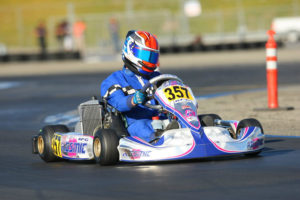 Phillip Arscott, a veteran racer on the national and international scene, kept his composure throughout the entire weekend, driving and wrenching for himself as his father vacationed in Hawaii. The unique and talented driver contested the final two rounds with the assistance of the entire RPG staff when needed. Phillip ran second throughout the first round of action on the weekend, placing runner-up in qualifying, Prefinal and the Final. He was able to secure the fast lap of the race in the main event, and carried it over to the next day.

Arscott found more speed overnight as he dominated the final round to clinch the championship. Qualifying on the pole position with a 49.761-second lap time, Arscott kept the pace through the 17-lap Prefinal and the 25-lap Final, as he was the only driver to post fast laps in the 49-second bracket. The only challenge was lap traffic in the closing circuits of the main event, as two drivers nearly made contact with Arscott as he pushed through to the checkered flag. The victory was his third of the season, winning a round at each stop of the series, and gave him his first series title in addition to his third trip to the Rotax Grand Finals.

Parker McKean was among the challengers in the title chase heading into the series finale weekend. McKean kept himself in the hunt throughout the weekend with solid pace. He ran third to the defending series champion and Arscott on Saturday, running similar lap times throughout the day. Running third again throughout Sunday, McKean was challenged early in the main event when hard contact was made as another driver tried to overtake his position. The result was damage to his steering components and the starter system of the engine, and he eventually retired. Despite his first DNF of the series, McKean finished out the series third in the point standings to put two RPG drivers on the championship podium. Washington driver Hailey Groff completed her first year at the Challenge program with mixed results on the final weekend. She continued to improve as the weekend progressed, but contact hampered her performance in the main events, placing 19th and 21st. 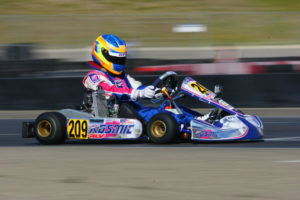 Junior Max RPG driver Blaine Rocha seemed at home all weekend long at the CalSpeed circuit. The NorCal pilot was on cruise-control in his RPG Kosmic Saturday and Sunday out front of the competitive field, roughly two tenths of a second quicker in nearly every on-track session. Saturday was a complete sweep, earning maximum points on the day to move up to the number one position in the championship standings. He and mechanic Erik Bartolero backed it up with a similar performance on Sunday, driving away to an 11-second victory in the main event to clinch his first Challenge championship and first ever ticket to the Rotax Grand Finals.

Luke Selliken came into the final weekend of the Challenge leading the championship. He never came to grasp with the circuit as well as Rocha, but secured the second spot in the title chase to put RPG 1-2 on the podium. Contact hampered Selliken’s results on Saturday as he was forced to drive from the back to the front in the main event. Contact in the Prefinal shut off his engine and dropped him to 18th in the order. As he had shown before, he was more than capable of knifing through the field, finishing fourth in the Final. Selliken capped off the series with a stellar runner-up finish on Sunday to join Rocha on the podium for a third RPG 1-2 finish in six races. Utah driver McKay Snow showed speed in the qualifying sessions, sitting top-10 both days however contact dropped him down the order to finishes of 14th and 11th. 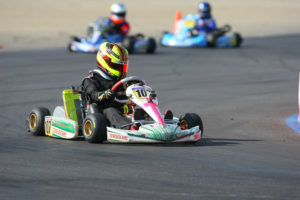 The third Challenge championship came via Sting Ray Robb. The RPG Tony Kart driver secured the Mini Max title with his third victory of the series on Saturday, backing it up with a runner-up finish on Sunday. His results on the weekend also granted him with a ticket to the Micro & Mini Max Invitational event, running in conjunction with the Rotax Grand Finals, putting three RPG drivers among the first confirmed for the New Orleans event.

DD2 rookie Andrew Evans once again showed well in just his third weekend in the category, picking up two runner-up finishes to the defending series champion and earning the vice-champion trophy in the process. Evans continued to improve as the weekend wore on, and was nearly running similar lap times to the leader by the main event on Sunday afternoon. Under the eye of the RPG staff and more time, Evans could be a serious contender at the US Rotax Grand Nationals event in August. Justin Peck earned the third spot in the Masters Max point standings after a rough final weekend. Entering the weekend with the lead in the championship, Peck matched the pace with his two championship rivals during the opening day, but a first lap wreck in the main event on Sunday took him out of contention. Third in championship chase is a personal best for the RPG driver from Utah.

For more information on all the products and services that the Rolison Performance Group has to offer, visit www.rolisonperformancegroup.com .  RPG has arrive-and-drive opportunities for the new Rotax Can-Am ProKart Challenge in the Pacific Northwest, the entire 2013 SKUSA Pro Tour schedule this summer, along with the US Rotax Grand Nationals and Pan American Challenge. Anyone interested in being part of this winning program should contact Mike Rolison via e-mail at roli5000@hotmail.com

Rolison Performance Group is a leading race team and prep shop in American karting, and is also a Rotax Service Center and a Kosmic chassis dealer.  Owner Mike Rolison, known as “Roli” at the racetrack, has built a career coaching some of the best kart racers on the West Coast. Over the past decade, he has helped 100′s of drivers and mechanics improve their craft. Mike brings world class driving and coaching experience to every racer he works with. Whether you are competing on the local, regional, national or world stage Roli’s driving and tuning instruction will improve your abilities and results. Luke Selliken gained the 2012 SKUSA Pro Tour TaG Junior championship with the support of Rolison Performance Group.  RPG provides trackside support and arrive-and-drive programs for many series as the team is a Kosmic chassis and product line dealer and is proud to campaign karts on the regional and national stage.