NEWBERG, OREGON (March 6, 2013) – It has been a phenomenal start for the Rolison Performance Group in 2013 with a solid group of drivers under the tent, guided by one of the most talented staffs assembled in North American karting. The journey continues this weekend (March 8-10) as the operation will contest the series finale for the Rotax Challenge of the Americas. On the line for a handful of the drivers will be direct tickets to the Rotax Grand Finals event later this season, with a chance to contend for the world championship title.

RPG owner Mike Rolison has been pleased with how the first two months have faired for the operation, “This has been a great start to our 2013 season. We have focused on beginning the season strong, as we ended 2012 with great results. Thankfully, that momentum has continued into this season and our drivers are making great strides on and off the track. I can’t thank enough all the mechanics and driver coaches for their hard work and dedication to each and every driver under the tent.” 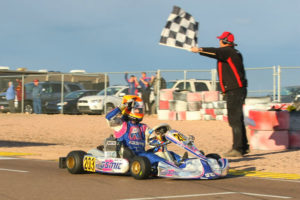 Luke Selliken is gunning for another checkered flag at the season finale in hopes of securing the Junior Max title (Photo: Sean Buur – Go Racing Magazine)

Two Rolison Performance Group drivers have the advantage in the Junior Max division, heading into the series finale. Luke Selliken and Blaine Rocha currently sit first and second in the series championship, both earning two victories on the season. Selliken is first with a 17 point margin over Rocha, with Luke holding a four-race podium streak. Utah driver McKay Snow enters the CalSpeed weekend ninth in the championship with a chance at moving into the top-five with a solid performance to close out the series. 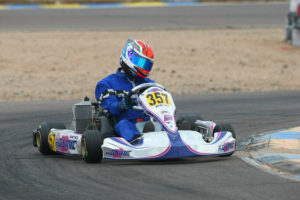 In Senior Max, Phillip Arscott and Parker McKean are in the hunt for the series championship. Arscott triumphed for one victory at each series stop, and leads the point standings by 24 points. McKean, a winner in round one of the series this year and a victor at the CalSpeed facility a year ago, sits third in the standings about 60 points out of first. Washington driver Hailey Groff continues to make improvements under the RPG tent in her first year at the Rotax Challenge of the Americas. The accomplished regional racer recorded her best finish at the Phoenix event, and looks to continue advancing forward in the field.

RGP driver Justin Peck holds the number one position in the Masters Max championship chase heading to the series finale. The Utah driver earned his first series victory in Phoenix, and has stood on the podium in all four main events on the year. While his advantage is a slim two points, Peck has been the most consistent driver in the class to date.

Mini Max driver Sting Ray Robb is in the hunt for the series championship. Two victories with a total of three podium finishes thus far have the Idaho driver 15 points out of the top spot. Each and every lap will be important, and the RPG staff will have Robb ready for the challenge. DD2 rookie Andrew Evans remains mathematically in the championship chase for the class title. Recording a podium finish in the first three events of the season, Evans will look for his first victory as a Senior driver.

Live audio broadcasts of the Rotax Challenge of the Americas event this weekend in Fontana, California can be found at www.ekartingnews.com/live . For more information on all the products and services that the Rolison Performance Group has to offer, visit www.rolisonperformancegroup.com .  RPG has arrive-and-drive opportunities for the new Rotax Can-Am ProKart Challenge in the Pacific Northwest, the entire 2013 SKUSA Pro Tour schedule this summer, along with the US Rotax Grand Nationals and Pan American Challenge. Anyone interested in being part of this winning program should contact Mike Rolison via e-mail at roli5000@hotmail.com.

Rolison Performance Group is a leading race team and prep shop in American karting, and is also a Rotax Service Center and a Kosmic chassis dealer.  Owner Mike Rolison, known as “Roli” at the racetrack, has built a career coaching some of the best kart racers on the West Coast. Over the past decade, he has helped 100′s of drivers and mechanics improve their craft. Mike brings world class driving and coaching experience to every racer he works with. Whether you are competing on the local, regional, national or world stage Roli’s driving and tuning instruction will improve your abilities and results. Luke Selliken gained the 2012 SKUSA Pro Tour TaG Junior championship with the support of Rolison Performance Group.  RPG provides trackside support and arrive-and-drive programs for many series as the team is a Kosmic chassis and product line dealer and is proud to campaign karts on the regional and national stage.