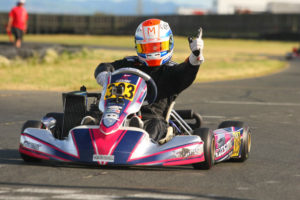 SONOMA, CA (March 24, 2015) – The winning combination of speed and consistency has always been one of Luke Selliken’s most impressive strengths, and since graduating to the Senior category in 2014, he has become one of North American karting’s brightest stars.  The Portland, Oregon pilot put yet another key accomplishment on his resume in mid-March as he capitalized on every situation during the final rounds of the Rotax Challenge of the Americas series to secure the Senior Max title, earning himself a spot on Team USA for this year’s Rotax Grand Finals in Portugal.  Selliken entered the season finale at the Simraceway Performance Karting Center in Sonoma, CA knowing that he would need to have a tremendous outing to steal the title. Using consistency and maturity, Luke worked with his Rolison Performance Group squad to put devise a fast setup on his Kosmic, and managed the on-track action extremely well, posting a pair of runner-up finishes to win the prestigious Senior Max championship.

“Going into the weekend, we were very confident that we were going to have better speed than the previous rounds and, in practice, that was confirmed as we were the fastest in both timed sessions on Friday,” Selliken stated. “All of the races were incredibly tough and could have ended in multiple different finishes, but I was able to convert my late-race pace into two second-place finishes and the series championship. It was an amazing feeling crossing the line knowing I was the champion after coming so close in the past three seasons.” 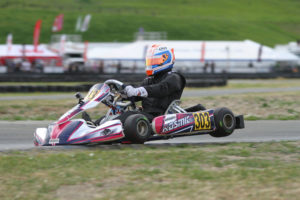 Luke’s speed from the Friday practice session carried over to Saturday’s round of racing, with Selliken coming just six hundredths short of the fast time in qualifying. After a hard-fought Prefinal, Selliken started the main event in the fourth position. After getting shuffled back to sixth, Luke fought his way forward fighting for the second position. Running third on the final lap, Selliken was in a three-wide run to the checkered flag. A late surge put him across the line in the second position, just ahead of his championship rival.

Up against two others for the championship, every session mattered on Sunday for Selliken. Recording the fourth fastest time in qualifying was followed by another challenging Prefinal race, with Luke placing fifth. Into third quickly, it was a four driver battle at the front for the win. Selliken assumed the second spot on lap 15, and was able to keep pace with the leader, running ahead of his championship rivals. Selliken pushed on for the next 10 laps to the checkered flag, coming across the line in the runner-up position, clinching the championship. Luke’s Sonoma performance has secured his trip to Portimao, Portugal in November for the 2015 Rotax Grand Finals, as part of this country’s national squad. 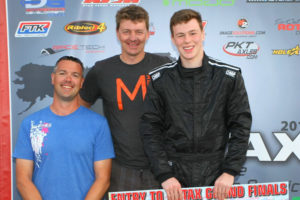 “Earning a spot on Team USA for the second time is a huge relief, especially because there are so many contenders with a chance to win in Senior at the remaining races this year. Now there is no pressure to get the ticket, so I can focus more on my Super Late Model program as well as mixing in some shifter races. The team at Rolison Performance Group and I are going to prepare as much as possible for the Grand Finals and I hope to bring another impressive result in Portimao.”

Selliken returns to the set of a kart on April 17-19 for the opening round of the Rotax Can-Am ProKart Challenge series in Richland, Washington – where he finished second in the championship standings in 2014. Next up will be the opening round of the NASCAR Evergreen Speedway Championship in Monroe, Washington on April 4. Be sure to visit SellikenRacing.com for more about Luke and follow his updates on Facebook along with Twitter.

The road to the top level of competitive kart racing has been a successful on-going journey for Luke Selliken. Luke’s introduction to the sport began at the indoor karting level, and has expanded into competitive national-level karting. Making the quick jump from the local and regional programs to the national stage, Luke excelled in 2012, earning vice-champion in the Rotax Challenge of the Americas program, carrying that momentum onto the Superkarts! USA Pro Tour TaG Junior championship. Luke was among the top Junior drivers in the country in 2013, earning another championship runner-up result in the Rotax Challenge of the Americas, and then went on to win five of six feature races at the Rotax Can-Am ProKart Challenge to earn his first ticket to the Rotax Grand Finals. In 2014 season, he moved successfully into the Senior level of competition and quickly became a force. He also began testing a Super Late Model stock car in the Pacific Northwest, and he will run a full schedule in 2015.