BUTTONWILLOW, CA (February 11, 2016) – Mike Rolison and his crew may just be the busiest and hardest working team in national level American karting. Rolison Performance Group supported their drivers at three consecutive events on separate coasts at the end of January and start of February, running the Rotax component of the Florida Winter Tour (Jan. 21-24), the Challenge of the Americas kickoff in Tucson (Jan. 29-31) and the opening round of the Superkarts! USA California ProKart Challenge at Buttonwillow this past weekend (Feb. 5-6). The team is hitting on all cylinders and is powered by a dedicated staff that works alongside Rolison, including Wesley Boswell, Kevin Glover, and a list of talented mechanics. Race wins and podiums were scored at all three events, kicking off what is expected to be a very successful season for the team. 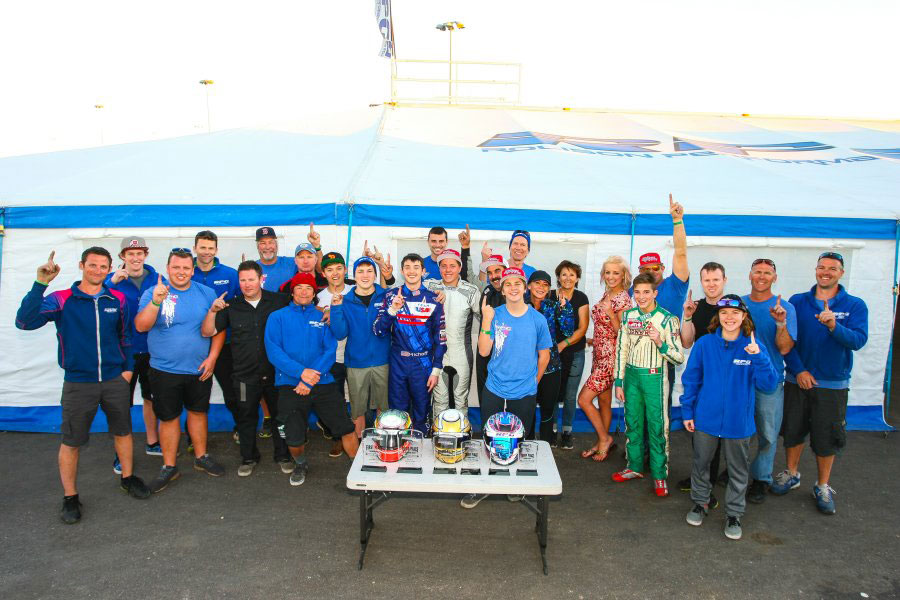 Mike Rolison’s RPG squad is off to a great start to the 2016 season, achieving success on the Florida Winter Tour, Challenge of the Americas and Superkarts! USA ProKart Challenge (Photo: SeanBuur.com)

While on the East Coast in Homestead for the Florida Winter Tour Rotax launch, Josh Pierson scored a huge win in the Micro Max class aboard his RPG Tony Kart, kicking off a run at the prestigious class title. The team also ran reigning Superkarts! USA Pro Tour TaG Master champion Nick Tucker in his Rotax debut, and the North Carolina pilot finished fifth overall in his RPG Kosmic. The team is looking forward to getting the chance to work with Nick throughout the 2016 season at additional Rotax events and, primarily, his title defense on the SKUSA Pro Tour. Long-time RPG development driver and 2015 Rotax Grand Finals Senior Max runner-up finisher Luke Selliken was in the fight in Homestead as well, turning the fastest lap of the main event en route to sixth in the final tally. Canadian rookie Senior driver Logan Cusson made his Rotax debut with RPG in Florida, graduating from regional and national Briggs Junior competition to challenge himself against some of the best. Cusson performed well and picked up speed throughout the weekend. The team expects a strong showing for Round Two as his skills develop with continued coaching. Rolison was also pleased to bring the Brazilian sibling duo of Christian and Nicolas Fliter to Florida for their first crack at the Winter Tour. Mike is very excited about the opportunity to work with these two young drivers.

At the COTA opener in Arizona, the team was strong in Senior Max as Jim McKinney scored a Saturday win in his RPG-Overdrive Kosmic, leading a sweep of the podium thanks to the impressive performances of rookie Seniors Kellen Ritter and Michael Michoff. The Canadian duo of Coltin McCaughan and Ritter came back on Sunday to finish second and third, giving RPG five of the six available podium finishes in Senior Max. Junior Max driver Matthew Taskinen is in his first full season with the RPG development program, and he stepped up to post a pair of podium finishes in Tucson. Matthew is working with Kyle Herder as part of the RPG coaching program and big things are expected out of this young Canadian pilot.

This past weekend, Rolison donned his own safety equipment to show his drivers how it’s done, again proving his tremendous skills that allow him to be such a successful coach and mentor. Rolison dominated the X30 Master class, qualifying on the pole, winning both heat races and topping the 30-kart class in the main event. Josh Pierson was back with the team, this time in his Mini Swift. It was a rough go as he was taken out in the opening corner of the main after running in the top-eight all day. Just as with the Fliter brothers in Florida, Rolison has the family pairing of Edward Portz (X30 Junior) and Jonathan Portz (Mini Swift) in their full driver development program for the Superkarts! USA events and he is high on their potential. Edward did not complete a lap in the opening X30 Junior heat race, but battled back to finish 14th in the 28-kart field in the main, gaining a half-second of pace to the leaders over the course of the day. Jonathan had his own issues in Mini Swift, but he was a star in the final, as after dropping to the tail of the field at the start, he knifed through his competition to finish a strong 15th. The team is very excited to get back to the excitement and competition of the California ProKart Challenge in March.

After a hectic run, the team will get one weekend to take a breath, and then they’ll do it all over again.

The tremendous excitement and momentum surrounding the Superkarts! USA program, as signaled by the over 200 drivers who filled the paddock for the first PKC of the year, has motivated Rolison greatly and has him dedicated to adding the full series to his team’s focus for 2016. RPG fielded entries for five racers, including himself, at Buttonwillow and he is adamant that he will grow his team for upcoming events, and the SKUSA Pro Tour, of course.

“This past weekend with the SKUSA crew in Buttonwillow was a bit of an eye-opener,” commented Rolison. “There was a positive atmosphere and you could feel the momentum. We’ve had plans from the start of the year to follow the entire SKUSA Pro Tour and the SuperNationals, of course, but we had such a great time at Buttonwillow that we’re going to add the California ProKart Challenge to our driver development event schedule this year to participate in the remaining races. We have a core group of talented drivers who have already signed on for the full PKC season and we have spots under the tent for any Southwest drivers who’d like to become part of our winning driver development program. I urge anyone wanting to really focus on his or her skills and development as a racer to call me. We’re here, we’re running the full series and if you want to try something different, give us a call and we’ll give you a quote.”

The team will fire up the next run of races on Thursday, February 18 beginning with the second round of the Florida Winter Tour. Head over to RolisonPerformanceGroup.com for more information on becoming part of the RPG operation, and follow their success on Facebook.

About Rolison Performance Group:
The Rolison Performance Group is a leading race team and prep shop in American karting, and is also a Rotax Service Center and a Kosmic chassis dealer. Owner Mike Rolison, known as “Roli” at the racetrack, has built a career coaching some of the best kart racers on the West Coast. Over the past decade, he has helped 100′s of drivers and mechanics improve their craft. Mike brings world class driving and coaching experience to every racer he works with. Drivers that have been part of the Rolison Performance Group team over the past few seasons have recorded a number of national victories, claiming Superkarts! USA Pro Tour and Rotax Challenge of the Americas titles. RPG provides trackside support and arrive-and-drive programs for many series, including the Florida Winter Tour, Challenge of the Americas, US Rotax Grand Nationals, SKUSA Pro Tour, US Open, Can-Am Karting Challenge, California ProKart Challenge and the SKUSA SuperNationals. The team is a Kosmic chassis and product line dealer and is proud to campaign karts on the regional and national stage.