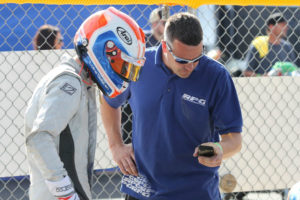 Selliken discussing with Mike Rolison during a qualifying session at PKRA, where Luke earned the fast lap both days aboard his RPG Kosmic (Photo: eKartingNews.com)

PORTLAND, OREGON (February 26, 2015) – Rising motorsports star Luke Selliken added to his list of podium finishes on his growing CV following the action at the Phoenix Kart Racing Association for the second stop of the 2015 Rotax Challenge of the Americas. The February 13-15 event hosted rounds three and four of the six-race championship series, that will award the title winner with a ticket to the 2015 Rotax Max Challenge Grand Finals. After a weekend of top-five results in Tucson last month, the Oregon driver showed well once again at the Glendale, Arizona facility to earn two podium results and keep himself in contention for the Senior Max championship.

The Friday practice day ended with Selliken a little bit off the pace, finishing seventh in the Pre-Qualifying session and about three tenths of a second slower then the fast time set. The Rolison Performance Group crew did their homework overnight with Selliken’s Kosmic / Rotax package, as he finished the morning warm-up Saturday in the number one position, carrying the speed over to the qualifying session. A 46.064-second lap on his fourth circuit was best of the 23 drivers in the field, earning five critical bonus points toward the championship and the pole position for the main event.

Luke fought for a fourth place result in the 17-lap Prefinal, struggling with straight-line speed. Driving strong through the tight sections of the PKRA course, Selliken’s lack of top speed down the long straightaway left him susceptible to getting passed going into the ‘Daytona’ corner. The team, including Luke’s father Garron, went to work, making changes for the 25-lap Final. Dropping back to sixth at the start, Selliken fought back early. He eventually worked into the third position and led a large pack of drivers trying to run down the top two drivers. Running some of the quickest laps toward the end of the race, Luke came just short of stealing the runner-up spot, settling for the third spot on the podium.

“Both days, we had really strong pace, especially in the morning,” commented Selliken after the weekend. “On Saturday, I made a mistake passing in turn 3 and it allowed the two front runners to break away. I was slowly catching the leaders but I just ran out of time.”

Sunday began much like the previous day did, with Selliken among the top drivers in the morning warm-up. The qualifying strategy set out by Luke and team boss Mike Rolison was the perfect setup. With much of the field jockeying for a drafting partner, Selliken found his spot on the track, and laid down a blistering 46.028-second lap to secure the fast time by a full three tenths of a second, adding another five points toward his title hopes. Leading the field to the green flag, Selliken led the opening few corners before relinquishing the top spot. A lap later, he would get shuffled back to the sixth position. Luke stayed focused, and fought his way back up to fourth by the checkered flag. Selliken stayed strong to move up one position at the start of the 25-lap Final. Moving into second just four laps later, he stayed locked on the leaders bumper until the halfway point. Luke led a few times over the course of four laps before he was pushed down to fourth. On lap 20, two drivers fighting for second made contact, allowing Selliken to slip into the second spot. He held the position until the checkered flag, recording his first runner-up finish of the season. 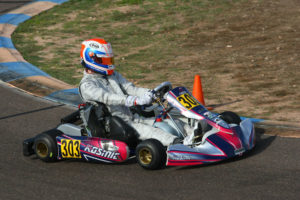 Luke Selliken drove his Rolison Performance Group Kosmic to the podium both days at the Rotax Challenge of the Americas event in Phoenix (Photo: SeanBuur.com)

“The highlight of the weekend was definitely qualifying on Sunday,” added Selliken. “It was very tough in the Prefinal so in the Final, I tried to run a smart race and sit back, knowing I didn’t have the out of draft pace to lead. I made a move to the front but the guys behind were able draft back up and pass me. The leader got away after the crash and I thought I could have caught him with a few more laps. Overall, I think we were just a little bit off down the straights but we have improved the chassis and motor dramatically from Tucson, where we struggled with pace. I am very confident going into the final round at Sonoma. I know the team at RPG is going to be able to provide a package that can with the ticket to worlds for the third year straight in the Senior class.”

Thanks to the two pole position bonuses and finishing on the podium in both races, Selliken finds himself only 13 points out of the championship lead in the third position. Last year’s Rotax Challenge of the Americas Senior Max title went down to the final lap, which saw three drivers finish within three points of each other. The driver that earns the 2015 Rotax Grand Finals ticket will be decided on March 13-15 at the Simraceway Performance Karting Center in Sonoma, California. Luke gained his first two Senior Max podiums at the event one year ago.

The weekend prior to the karting event, Selliken was back behind his #3 M Realty Super Late Model, competing at the Chilly Willy 100 at the Tucson Speedway in Arizona. The two-day event was held at the facility just across from the Musselman Honda Circuit Luke has been competing at for the last four years. After qualifying 23rd in a field of 29, Selliken won his heat race on the opening day. The following day in the main event, the 16-year-old was trying to avoid an incident and just clipped his right rear on another car. The contact damaged the geometry of the car, however, Selliken continued on adapting to the condition of the car. He remained consistent for the remainder of the race, and climbed his way up to the 15th position. His next race will be the opening race of the NASCAR Northwest Whelen All-American Series at Evergreen Speedway in Monroe, Washington on April 4.

About Luke Selliken:
The road to the top level of competitive kart racing has been a successful on-going journey for Luke Selliken. Luke’s introduction to the sport began at the indoor karting level, and has expanded into competitive national-level karting. Making the quick jump from the local and regional programs to the national stage, Luke excelled in 2012, earning vice-champion in the Rotax Challenge of the Americas program, carrying that momentum onto the Superkarts! USA Pro Tour TaG Junior championship. Luke was among the top Junior drivers in the country in 2013, earning another championship runner-up result in the Rotax Challenge of the Americas, and then went on to win five of six feature races at the Rotax Can-Am ProKart Challenge to earn his first ticket to the Rotax Grand Finals. In 2014 season, he moved successfully into the Senior level of competition and quickly became a force. He also began testing a Super Late Model stock car in the Pacific Northwest, and he will run a full schedule in 2015.