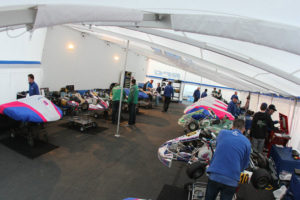 The new RPG tent was full at the Rotax Challenge of the Americas opener (Photo: eKartingNews.com)

NEWBERG, OREGON (January 30, 2015) ­ It was a busy start to the  2015 season for the Rolison Performance Group race team. Three straight weeks in January led to solid results by their drivers from the west coast to the east coast. The Oregon-based operation began the season with the opening rounds of the Rotax Challenge of the Americas program at the Musselman Honda Circuit in Tucson, Arizona and then traveled east to the double-weekend program of the Florida Winter Tour at the Homestead Karting facility.

“With just a month between the end of 2014 and the start of 2015, I’m really happy with where we are going into the new season.” commented Mike Rolison, owner of Rolison Performance Group. “We’ve added a new tent to allow all our racers to sit under one tent, which we debuted at the SKUSA SuperNationals XVIII in November. The first two events of 2015 we welcomed some new drivers to our program, including regional drivers looking to make the next step up to the national scene, along with international drivers joining our squad during their trips here to the United States. Our main goal of improving the skill set of each driver is still the driving force that has us working from sun up to sun down each and every day at the race track.” 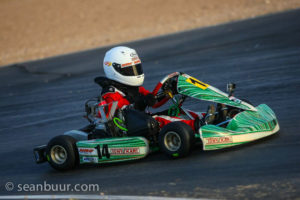 Josh Pierson drove to a podium finish both days in the Micro Max category (Photo: SeanBuur.com)

The month began at the opening event of the 2015 Rotax Challenge of the Americas at the Musselman Honda Circuit in Tucson, Arizona. Although victories eluded the team for the first time in many years at the series, RPG drivers were in contention in a number of categories and came away with three podium finishes. Two of those results were from Micro Max driver Josh Pierson. Working with RPG and Neliton Racing Concepts, Pierson is among the top contenders returning in the youngest Rotax division. Josh came close to winning both main events, finishing second both days in photo finishes, while also earning the top-qualifier results in Sunday’s round.

The third podium went to Senior Max sophomore Luke Selliken. The racing in Senior Max was among the most competitive in the eight-year history of the series, with RPG driver right in the mix. Selliken was leading Saturday’s main event in the closing laps until contact pushed him off-course. He regained positions to finish third, backing it up with a fifth place result on Sunday to lead RPG both days. Fellow second-year Senior driver Blaine Rocha, the Junior Max series champion in 2013, ran fourth on Saturday, with a disappointing 11th on Sunday. Saturday’s main event featured four RPG drivers inside the top-10. Parker McKean, a former series race winner, had a stellar performance in his return to the seat with drive to eighth, with RPG newcomer Walker Hess in the tenth position. Another new driver to the RPG stable, Phillippe Denes, recorded his first top-10 in his Senior Max debut. The Senior Max category featured eighth RPG drivers, including Hailey Groff, Jared Higham, and Ryan Martin. 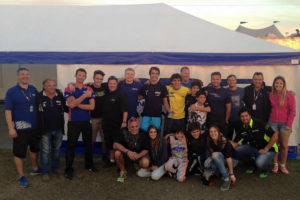 RPG driver roster expanded for the 2015 Florida Winter Tour, and has room to grow (Photo: RolisonPerformanceGroup.com)

Rolison Performance Group is the defending two-time champion in the Junior Max category, with another young crop of drivers under the tent in 2015. A total of four top-10 results from the three drivers with RPG were recorded in Tucson. Canadian Jeff Fulham drove to seventh on Saturday and improved to fourth on Sunday. New drivers Michael Michoff and David Rafailov drove to a sixth place and a seventh place respectively. New RPG driver Scott Falcone landed two fourth-place results in the Masters Max category in his debut aboard a Kosmic chassis. Chad Wallace added a ninth and tenth place results of his own. Colorado driver Hannah Greenemeier took advantage of the available RPG tent space, racing aboard her new Praga kart to place inside the top-10 in both Mini Max Finals.

Directly after the weekend in Tucson, Rolison and a handful of the RPG staff flew over to the Sunshine State for two straight weekends of the Florida Winter Tour at the Homestead Karting facility outside the Miami area. Up first was the inaugural Rok Cup USA program at the FWT, with three drivers competing under the RPG stable. Among them was last year’s FWT Mini Max vice-champion driver Caio Collet. The Brazilian made his Junior debut, and showed to be just as fast in the larger and faster machine. Collett was among the top three during the Saturday’s action, in the hunt for a podium finish. Holding second after the opening lap of the main event, Collet suffered a disappointing mechanical failure and was forced to retire from the event. The young driver bounced back the following day to remain inside the top-five, finishing the day seventh in the order. Fellow Brazilian Guilherme Peixoto drove to a pair of top-15 results in Junior Rok, while Pietro Guglielmi drove in Senior Rok to a 15th in Round Two.

The next weekend, RPG fielded six drivers aboard the Kosmic brand in the opening rounds of the Florida Winter Tour Rotax Max Challenge program. Collett and Peixoto represented the team in the Junior division. Collett was among the contenders once again, involved in an opening lap incident in the main event on Saturday after starting ninth, bouncing back to finish 10th on Sunday. Peixoto drove to finishes of 14th and 19th. Guglielmi was joined by Brazilian Luca Travaglini and Canadian Zachary Scalzo. The best finish came from Travaglini, who placed 10th at the 2014 Rotax Grand Finals racing with Team Brazil. He ran inside the top-10 all day on Saturday to end up with a solid fifth place result. Guglielmi was top-20 both days, while Scalzo earned an 11th place result on Sunday. The best result of the Rotax weekend came from Brazilian Gabriel Bortoleto in the Micro Max division. The entire weekend was one of advancing forward, with Bortoleto qualifying 15th and 18th. During the Saturday Prefinal, Gabriel drove to 12th and then gained another four spots in the main event to place eighth. Sunday faired better, gaining seven spots in the Prefinal, and another seven to finish just short of the podium in fourth. 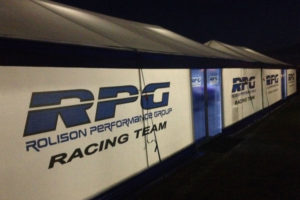 Rolison Performance Group is set to be back at it in February, beginning with the Rotax Challenge of the Americas at the Phoenix Kart Racing Association in Glendale, Arizona on February 13-15, followed by another double-weekend event with the Florida Winter Tour at the Orlando Kart Center on February 20-22 and February 27-March 1.

For more information on all the services that the Rolison Performance Group has to offer, or how to be part of the successful operation at any of the three events in February, or throughout the 2015 season, call 503.260.4514.

About Rolison Performance Group:
The Rolison Performance Group is a leading race team and prep shop in American karting, and is also a Rotax Service Center and a Kosmic chassis dealer. Owner Mike Rolison, known as “Roli” at the racetrack, has built a career coaching some of the best kart racers on the West Coast. Over the past decade, he has helped 100’s of  drivers and mechanics improve their craft. Mike brings world class driving and coaching experience to every racer he works with. Drivers that have been part of the Rolison Performance Group team over the past few seasons have recorded a number of national victories, claiming Superkarts! USA Pro Tour and Rotax Challenge of the Americas titles. RPG provides trackside support and arrive-and-drive programs for many series, including the Florida Winter Tour, Challenge of the Americas, US Rotax Grand Nationals, Pan-American Challenge, SKUSA Pro Tour, Can-Am Karting Challenge and the SKUSA SuperNationals. The team is a Kosmic chassis and product line dealer and is proud to campaign karts on the regional and national stage.

Previous Post
2015 Kosmic karts arriving soon!
Next Post
SELLIKEN ADDS TO PODIUM TOTAL FOR 2015 AT ROTAX CHALLENGE OF THE AMERICAS