Rolison Performance Group and Kosmic Kick Off 2019 on Winning Note 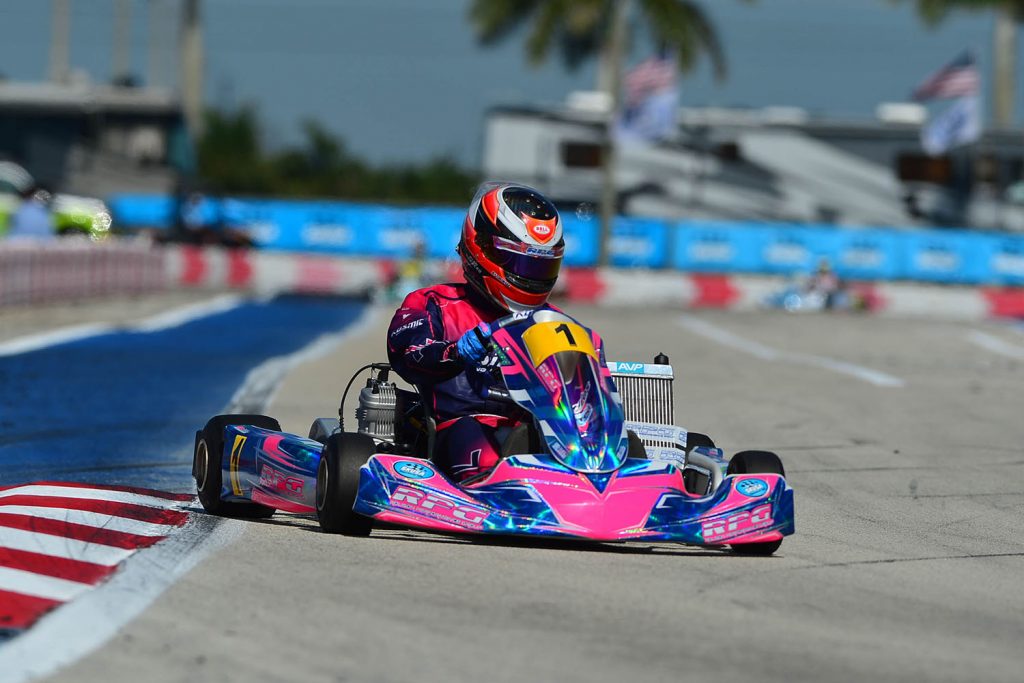 After capping the 2018 season with a tremendously-successful team performance at the SKUSA SuperNationals in November, the Rolison Performance Group launched into 2019 with positive momentum. Last weekend, the team competed in the opening rounds of the Superkarts! USA Winter Series at AMR Homestead-Miami Motorplex in south Florida (January 11-13) running their industry-leading Kosmic chassis and came away with four podium finishes, including a 1-2 sweep in the headline X30 Senior category on Sunday. New RPG recruit Ryan Norberg validated his national #1 plate by scoring the Sunday victory, and he was joined on the podium by senior rookie Patrick Woods-Toth as the duo topped a stacked field of over 50 drivers.

“I’m incredibly proud of every driver and team member who competed under our RPG banner this weekend, because their work ethic and positive attitude just kept feeding our drivers with confidence and motivation,” enthused Mike Rolison, RPG Team Principal. “The effect of Ryan’s addition to the team were instantly noticeable. His approach and dedication matches ours perfectly, and the experience and knowledge that he’s added to our coaching staff paid dividends from the get-go. I’m incredibly happy with the results. Three podium finishes in X30 Senior is massive, and both Ryan’s win and Patrick’s second place finish on Sunday mean a lot to me and our team.”

Norberg made an immediate impact for RPG in the Kosmic colors, qualifying on pole on Saturday. Having signed with Rolison just after Christmas, Ryan joined the team in Florida for a tune-up weekend at the track, but this was his first major event in RPG colors. With Norberg leading to the way, Woods-Toth followed suit and was third in Round #1 qualifying. Cedric Lupien and Hannah Greenemeier timed in 15th and 16th in the 54-kart field, while Jacob Gulick was 36th.  In the first split Prefinal, Norberg and Woods-Toth pushed away to finish 1-2 while Lupien was also on the move, advancing from eighth to fourth.  In the second Prefinal, Greenemeier finished 11th and Gulick grabbed a single position to finish 15th, the final transfer position into the main event.  All four RPG drivers qualified straight through to the 25-lap main and would not have to run the LCQ.  In the final, Norberg paced all but one lap, dropping to second on the final circuit when reigning world champion Lorenzo Travisanutto was able to find a way past.  With Norberg in second, Woods-Toth matched his experience teammate in terms of success as the rookie Senior debuted with a stellar fifth place finish, putting two Rolison Performance Group drivers in the top-five. Lupien ran in the top-10 all race and finished eighth, while both Greenemeier and Gulick were out early.

On Sunday, Norberg stormed back motivated to get the win that eluded him, and the Floridian qualifying on the pole with Woods-Toth in sixth and Lupien in seventh. Unfortunately, Greenemeier was collected in an incident caused by another driver and did not log a timed lap, while Gulick improved to 29th during his qualifying session. Hannah stormed back in the Prefinal, despite being banged up, passing 16 karts to advance from 25th to ninth as the race’s hard charger. Norberg won that Prefinal by over a second, while Lupien was fourth. Gulick picked up a single spot and again transferred straight through to the main event. Woods-Toth was the only RPG driver in the other Prefinal, and he kept the team banner flying high, winning his race to make it an all-Rolison front row for the main.  In the second final of the weekend, everything was on-point, as Norberg and Woods-Toth ran away to finish first and second, three seconds clear of the competition. Norberg completed an incredible weekend, leading all but one lap and topping five of the six official sessions.  Lupien was again in the hunt, finishing sixth, while both Greenemeier and Gulick were driven over by other competitors, pushing them down the order.

In the ultra-competitive X30 Junior class, Branyon Tiner and Josh Pierson lined up to begin their 2019 season, and they got off to a great start by qualifying within the top-20 on Saturday.  The 57-driver field was extremely deep with numbers and talent, and after qualifying was completed, Tiner was 14th and Pierson was 18th, both within a half-second of the polesitter. Tiner turned the fast lap of his Prefinal to move from seventh to fifth, while Pierson was also inside the top-10 in eighth. In the final, Pierson finished 20th, while Tiner was involved in a race-ending incident on the final lap as he was battling for fifth. On Sunday, both drivers qualified within the top-20 once again. Tiner improved to 13th and Pierson was 20th on the combined time sheet. Pierson was out early in his Prefinal and would need to run the LCQ, but injured ribs put him on the sidelines for the remainder of the day. In his Prefinal, Tiner was able to avoid the chaos and again turned the fast lap of his Prefinal, finishing ninth. Starting 17th, Tiner was on the move, eating up his competition to pass 12 drivers, scoring an impressive fifth-place result.

Utah’s Dylan Peck made his national event debut with Rolison Performance Group in the KA100 Junior category, his dad Justin competing in Master Shifter.  Dylan qualified 14th on Saturday and was 13th in the Prefinal as he got more comfortable with the track and the event. He made up another spot in the final, finishing 12th in the final tally. With his first race day under his belt, Peck timed in 16th to begin Round #2 and then he stepped it up for the Prefinal, turning his fastest laps of the weekend to leapfrog into the top-10, officially finishing eighth.  In the Sunday final, Peck finished 13th after falling back a few spots, but the overall improvement throughout the weekend was a major positive.

Mississippi’s John Robicheaux was the team’s lone representative in X30 Masters and he got off to a good start, qualifying sixth for Round #1. The Prefinal yielded an eighth-place finish, but it was an injury to his right elbow caused by contact with his engine that changed the complexion of John’s weekend. Robicheaux tried to tough it out on Sunday, even qualifying seventh driving with just his left arm, but the Homestead track is just physically too demanding for him to go the distance.  The veteran is motivated to come back in February for redemption.

RPG had a trio of Master Shifter drivers under the tent in Homestead. Veteran team driver Justin Peck was joined by Dan Monteiro and Victor Jimenez. Monteiro raced with the squad at the SKUSA SuperNationals while Jimenez raced with the team during last year’s SKUSA Winter Series, missing Saturday’s events but was back for Sunday’s action. On Saturday, Peck led the way, qualifying third with Monteiro in fourth and the duo finished that way in the heat race, as well In the main, Peck suffered a rib injury as a result of aggressively attacking the curbs in Homestead, and he retired early to end his day on the sidelines. Monteiro finished third in the Prefinal, turning extremely consistent times all day to take fourth in main event. With Peck on the sidelines, Monteiro and Jimenez picked up the flag during Sunday’s qualifying session. Jimenez was quick but got nabbed for being too-wide with his rear track, moving Monteiro to third, but he came back in the Prefinal, taking the win to start the 21-lap final from the pole. The final was a different story, as Victor was done on lap nine, having been crashed out by another competitor. Monteiro completed a strong and steady weekend running the new IAME SSE 175cc package, taking his first SKUSA podium finish in third.