CHAMPIONSHIP AND PODIUMS TO CLOSE OUT 2012 FOR ROLISON PERFORMANCE GROUP 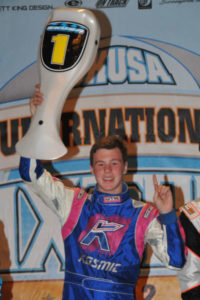 Luke Selliken solidified his SKUSA Pro Tour championship with a third place finish at the SuperNationals (Photo: On Track Promotions)

NEWBERG, OREGON (December 12, 2012) – Championships, it’s what every racer strives for. The Rolison Performance Group knows this and has the blueprint to help guide drivers toward that goal no matter the level of competition. The Oregon-based operation led by veteran karter Mike Rolison proved that statement in 2012 by gaining championships at the two high-level programs in the United States – the Rotax Max Challenge Grand Nationals and the Superkarts! USA Pro Tour. Two victories by RPG drivers – Joey Wimsett and Johnny Blair – at the August event granted them tickets to the Rotax Grand Finals in Portugal and last month, Luke Selliken secured his goal of claiming the TaG Junior championship with a podium finish at the SKUSA SuperNationals XVI in Las Vegas.

Selliken led the SKUSA Pro Tour TaG Junior point standings heading into the SuperNationals by just a slim margin. Any type of mistake could cost the Oregon driver valuable points or even the title. Under the guidance of the RPG tent and Rolison, Selliken performed well all week to secure a podium position and the season championship. Selliken laid down the sixth quickest lap time in qualifying to ensure a position toward the front in the heat races. A win in the opening heat race gained valuable championship points and put Luke in contention for the victory. Second place in heat two and fourth in the final heat placed Selliken P4 on the main event grid. Though placed in the outside line, he was able to avoid any major contact through the opening corners and was fifth after the opening lap. By the halfway point, Luke began making his move toward the front and was in third as they reached the final few laps. Selliken ran his quickest lap times at the end of the 20-lap event, and managed to finish third.

“2012 was a breakout year for Luke and I’m really proud of all that he accomplished,” stated Rolison. “From the beginning of the season to the SuperNationals, he continued to improve on his consistency, talent-level and his work ethic. Luke finished behind the defending European champion and a Ferrari development driver in Vegas after just three years in the sport. I’m very proud of what he’s done, including the Challenge of the Americas vice-championship.” 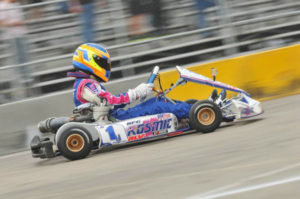 Rounding out the Rolison Performance Group TaG Junior roster were Blaine Rocha, Davey Manthei Jr. and Jake Preston. Rocha recovered from a tough qualifying result to start the main event 20th, gaining one more position in the 20-lap Final. Manthei posted an impressive lap in qualifying to position him fourth overall. A wreck in the second heat race dropped him to the Last Chance Qualifier where he won the race to start 35th in the Final. He was just about to break into the top-20 in the main event before another wreck ended his race early. Jake Preston had a great SKUSA SummerNationals, but bad luck haunted him in Las Vegas as he was unable to qualify for the feature race. 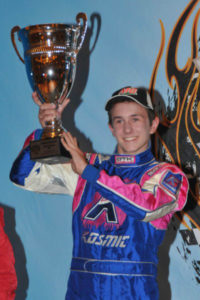 S5 Junior driver Andrew Evans benefited from working with the RPG staff to place third at the SKUSA SuperNationals (Photo: On Track Promotions)

S5 Junior Stock Moto driver Andrew Evans made great strides since joining the Rolison Performance Group development program. Before as a privateer, he was struggling to compete for a podium finish on the SKUSA Pro Tour. After working with Rolison and driver coach Joey Wimsett, Evans became a contender at the SuperNationals. He qualified in the third spot and held it through the heat races to start the feature race from the P3 grid position. Evans ran as high as second in a great battle for the runner-up position throughout the 20-lap main event, crossing the line in the third position for his first ever Superkarts! USA podium finish.

“We have been only working with Andrew for the past two months and he’s made great strides in that time,” stated Rolison. “Prior to the SuperNationals, we did three test weekends with him and I was very impressed with his desire to become a better driver. Andrew put in a lot of hard work and is a very good student, and it all paid off with a podium at the SuperNationals.”

Parker McKean looked to have a top-10 finish going in the S2 Semi-Pro Stock Moto category. After qualifying 10th, he improved his position with solid results in the heat races to move up to P8 grid spot for the Final. Up to seventh on the opening lap, McKean was involved in a wreck that took him out of the event, putting an end to a promising finish. His father Bruce McKean contested the competitive S4 Master Stock Moto category, but was unable to qualify for the main event. The same can be said for new Rolison Performance Group driver Brody Zink. Making his first start at the SuperNationals and racing a Parilla Leopard package for the first time in the TaG Senior category, he suffered a flat tire in qualifying and a heat race, which faltered his results and kept him from racing in the Final.

Other drivers under the RPG tent included TaG Master driver Robby Mott and TaG Cadet competitors Sting Ray Robb, both piloting their own chassis and working with the RPG staff. Mott was a contender all week long until another competitor drove him into the barriers early on in the main event. Thankfully, Mott was able to walk away from the hard impact without any major injuries. Robb was quick on the week, improving in his heat races but was shuffled back by contact in the Final. He was able to improve on his DNF from a year ago to finish 18th.

Rolison continued, “Overall, the SKUSA SuperNationals was a successful event for Rolison Performance Group. We gained two podium finishes and completed our goal of a series championship, leaving Vegas with some hardware. We experienced some disappointing results but that will happen at this level of competition. Taking away the bad finishes, our drivers all progressed as the week went on and I saw a lot of positives from each of them.”

Following the SuperNationals, Rolison joined RPG drivers Joey Wimsett and Johnny Blair at the 2012 Rotax Max Challenge Grand Finals in Portimao, Portugal. Wimsett, the defending United States DD2 champion, and Blair, the reigning United States Masters Max Grand Nationals winner, took part at the ‘Olympics of Karting’ at the Kartodromo Internacional do Algarve. Wimsett was among the contenders in the DD2 category that featured a number of former Rotax Grand Finals champions. He began Championship Saturday starting eighth in the Prefinal, but slipped back to 11th. The Final was not meant to be for Wimsett as he fell off pace at the wrong time, as others did throughout the Team USA squad, and finished 16th in his first year competing in the DD2 category. Blair contested the DD2 Master category and after qualifying was the second best on the team – 26th overall. Unfortunately, Blair mistakenly came in underweight after his first heat race, which essentially put him in the Last Chance Qualifier. Involved in a wreck after working his way toward the transfer position, Blair had his event cut short early.

“Johnny did a great job for his first time at the Rotax Grand Finals and only his second time in a DD2 ride,” added Rolison. “He learned a lot while there and certainly had the most fun out of any driver I saw there. He’s determined to return next year, and we love that desire from drivers. Joey impressed me as he was running at the front from the start of the event. We had some technical issues hit us Saturday, but I couldn’t be more proud of him as he made only his second ever start in a DD2 at the Rotax world championships. It only shows why he is here at Rolison Performance Group working with our drivers.”

Rolison Performance Group Race Team is gearing up for a busy start to the 2013 season, as the operation will support drivers at both the Rotax Challenge of the Americas and the Florida Winter Tour series. Arrive-and-Drive packages, driver coaching opportunities or kart transportation and tent space are available for both programs, as RPG can provide any type of service you may be searching for. Plans are also underway for the 2013 Superkarts! USA Pro Tour, the United States Rotax Grand Nationals and the Rotax Pan American Challenge. Those looking to finalize their 2013 season plans are suggested to contact Rolison today. To learn more about the Rolison Performance Group, visit www.rolisonperformancegroup.com for more about their services and products available or find them at www.facebook.com/RolisonPerformanceGroup

Rolison Performance Group is a leading race team and prep shop in American karting, and is also a Rotax Service Center and a Kosmic chassis dealer.  Owner Mike Rolison, known as “Roli” at the racetrack, has built a career coaching some of the best kart racers on the West Coast. Over the past decade, he has helped 100′s of drivers and mechanics improve their craft. Mike brings world class driving and coaching experience to every racer he works with. Whether you are competing on the local, regional, national or world stage Roli’s driving and tuning instruction will improve your abilities and results.  RPG provides trackside support and arrive-and-drive programs for many series, including the Challenge of the Americas, US Rotax Grand Nationals, Pan-American Challenge, SKUSA Pro Tour, Northwest Gold Cup and the SKUSA SuperNationals.  The team is a Kosmic chassis and product line dealer and is proud to campaign karts on the regional and national stage. Bookmark www.rolisonperformancegroup.com today.