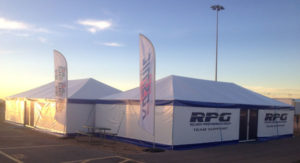 Rolison Performance Group will welcome 10 drivers under the tent this weekend in Tucson (Photo: rolisonperformancegroup.com)

NEWBERG, OREGON (January 8, 2013) – The 2012 season was a successful 12 months of racing for the Rolison Performance Group in the sport of karting. Multiple accomplishments and goals were reached by the many drivers who competed under the RPG tent nationally, regionally and at the local level. Mike Rolison and the entire RPG staff is ready to take on the 2013 season with the same attitude toward providing the best services in the sport at taking drivers of any experience to the next level. For some, it begins this coming weekend in Tucson, Arizona as RPG will contest the opening rounds of the Rotax Challenge of the Americas at the Musselman Honda Circuit.

The staff at Rolison Performance Group is led by Mike Rolison, a veteran in the sport with nearly 20 years of experience as a driver and coach. He’s lent his expertise to numerous drivers over the years, and has brought on a number of current and former drivers to ensure each and every driver is getting the attention they deserve. Reigning DD2 Rotax Grand Nationals champion Joey Wimsett worked under the RGP tent throughout 2012, helping many of the Junior drivers reach their goals. Mike Beeny of MSquared Karting has been a welcomed addition at The Challenge events, and will return once again in 2013. New to the team is coach/driver Phillip Arscott. The 2009 Rotax Grand Nationals champion will compete in his first season at The Challenge, while also provide assistance to other drivers under the RPG tent. Veteran and former SKUSA SuperNationals SuperPro champ Wesley Boswell has come on board with RPG to work as the team’s data acquisition engineer.

“2012 was very successful for our drivers and the team overall. But in 2013 we need to take it to the next level to ensure we are providing the best services possible,” states Mike Rolison of RPG. “Joey was a great asset last year, and helped Luke Selliken in his breakout season, along with other team drivers. Joey’s time with us last year was great and I couldn’t be happier to have him back working with our drivers once again. Bringing on Phillip and Wesley adds to the experience our staff, providing probably 100 years of karting experience for our drivers to work with, no matter the goals or experience they may have.” 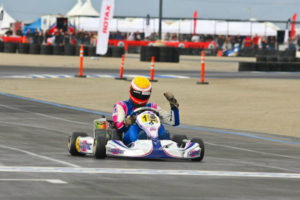 Parker McKean has his sites on another victory this season in Senior Max (Photo: Sean Buur – Go Racing Magazine)

A roster of 10 drivers in five categories will compete January 11-13, with a handful of drivers already getting some testing completed in recent weeks. Returning in the Senior Max category is Washington driver Parker McKean. In his debut season at The Challenge, McKean finished the year fifth in the final point standings, highlighted by a victory at the season finale weekend. Joining RPG for 2013 in Senior Max is Arscott. The two-time Team USA driver will compete the full Challenge schedule after making his debut last season at the series finale. Hailey Groff from Washington and Idaho driver Izak Hayda will make their Challenge of the Americas debut with RPG. Groff is a Northwest Gold Cup racer making the move to the national scene. Hayda is a new racer that will make his national debut, learning from the experienced Rolison Performance Group staff.

The trio of Junior Max drivers under the RPG tent for 2013 could see them battle each other for victories and the title. 2012 Challenge of the Americas vice-champion Luke Selliken is back to claim the one title that just slipped from his hands, as the Oregon driver scored the SKUSA Pro Tour TaG Junior title in November. One of the top Junior drivers of 2012 in the United States, Selliken is looking to improve on his three podium finishes from a year ago in the series. Blaine Rocha will make the transition to the RPG tent for 2013, ending last year working with the operation. Rocha finished 2012 sixth in the series championship, scoring a photo-finish victory last year in Tucson. McKay Snow also returns with RPG for 2013, as the Utah driver is looking to improve on his 10th place finish in the point standings a year ago.

Another recent driver to join the Rolison Performance Group roster is Andrew Evans. Working with RPG for two straight months last year helped him earn a podium finish in the S5 Junior Stock Moto category at the SKUSA SuperNationals. He will now make the transition to Senior level racing, along with jumping into a DD2 entry for the first time at the Challenge of the Americas. He will have 2012 Rotax Grand Nationals champion Wimsett to help guide him in that transition. Masters Max driver Justin Peck returns with RPG to take on The Challenge competition. The Utah driver finished sixth in the standing last year with the goal of podium finishes for 2013. Idaho’s Sting Ray Robb is also back under the RPG tent as he will look to secure the Mini Max title. Robb finished 2012 as the vice-champion, earning five podium finishes in six races.

For more information on all the products and services that the Rolison Performance Group has to offer, visit www.rolisonperformancegroup.com .  RPG has arrive-and-drive opportunities for the entire Challenge of the Americas events, as well as the 2013 SKUSA Pro Tour schedule this summer. Anyone interested in being part of this winning program should contact Mike Rolison via e-mail at roli5000@hotmail.com.