VICTORY AT ROTAX CHALLENGE OF THE AMERICAS FOR ROLISON PERFORMANCE GROUP

RPG racks up six trips to the podium, including a win, in Tucson

NEWBERG, OREGON (January 31, 2014) – The Rolison Performance Group kicked off the 2014 season with back-to-back weekends of racing in January, hitting the opening rounds of the sport’s two premier winter racing series. First for Mike Rolison and his squad was the opening weekend of the Florida Winter Tour in Miami, Florida, followed five days later by the first stop of the Rotax Challenge of the Americas in Tucson, Arizona. Supporting 14 drivers in Tucson, RPG left the Copper State with six podium finishes, including a big victory thanks to the efforts of Austin Versteeg in Junior Max. 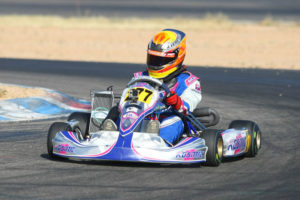 Utah’s Versteeg joined up with the team in Tucson and was fast right off the trailer. Qualifying second quickest in a stout 32-kart Junior Max field on Saturday set the tone for the entire weekend. In the Prefinal, Versteeg made everyone in Tucson aware of his intentions. The Kosmic pilot laid down consistent times lap after lap as he drove to an over two-second win. The final was similar to the Prefinal as Versteeg fended off challenges during the opening laps before driving away with another two-second margin of victory for his first series Junior Max win. Sunday proved that Versteeg is set to be a championship contender in 2014. In qualifying, Austin ran the third fastest lap of the session, less than two hundredths of a second off the pole time. Versteeg would drive to another Prefinal win, pulling away after just four laps. In stark contrast to the ease of his victory in the pre-main, the Final was a race-long battle until he was pushed off-course on the final lap and was forced to settle for a fourth place finish to cap off the weekend.  As a result of the contact, and finishing just off the podium, Versteeg now sits second in points, just one marker behind the leader. 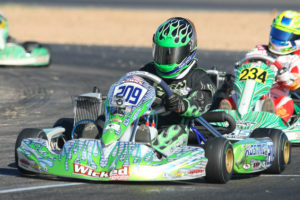 Kyle Wick impressed the paddock in Tucson with his performance in Junior Max (Photo: SeanBuur.com)

RPG driver Kyle Wick also had a strong weekend in his return to the Challenge. Wick had a solid day on Saturday, where he qualified in the top-10, leading to a very strong seventh place finish in the first day of racing. Sunday was a day of improvement for Wick as the RPG crew was able to provide a quicker Kosmic machine. He cut nearly three tenths of his qualifying time from the day before to sit fourth overall. After staying in the top-five in the Prefinal, Wick drove a great main event, one that saw him steal the lead on the final lap to cross the line first. Unfortunately, officials penalized Wick for contact earlier in the lap, which dropped him to third place. Joining Versteeg and Wick in Rotax Junior were Jeff Fulham and Dhyllan Skiba, who are now both part of the RPG development program this year. Fulham had a very impressive day on Saturday, where he stayed in the top-five in nearly every session before bringing home an incredible fourth place finish in the main, his best career Challenge result. Sunday saw another solid performance as Fulham drove from 20th to 10th in the main event. Skiba brought home a pair of top-20 finishes during both days of competition with a 20th on Saturday and then a 17th on Sunday.

“It was a weekend of ups and downs for our Junior drivers,” stated Rolison Performance Group owner Mike Rolison. “Austin secured his first win, which will set him up well as we gear up for a championship run. Kyle improved with every session and it was tough to see the win get taken away. He has the right attitude and I have no doubt that Kyle will fight for a victory at the next event. Fulham was quick and I see a podium in his future and Dhyllan will continue to improve as we work with him at future events.” 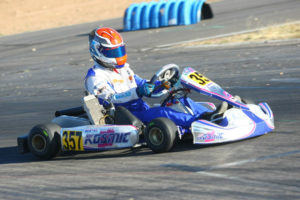 RPG supported four drivers in the Rotax Senior category, and it was a solid roster of talented pilots. Back-to-back runner-up finishes by Phillip Arscott highlighted the team’s efforts in the Senior Max class. The 2013 Challenge of the Americas Senior Max champion started out by qualifying his Kosmic fifth on the grid during Saturday qualifying. After slipping a spot in the Prefinal down to sixth place finish, Arscott remained unfazed as he turned his focus to the main, where he would make up the lost ground. Quickly up to fourth, he was able to run down the leaders with the fast laps of the race and slide into the second spot on the final lap when contact ensued. Sunday was more of the same for Arscott. Once again, Phillip qualified fifth and drove to a second place result in the Prefinal. After surviving a wild start that saw several frontrunners fall from the chase, Arscott kept his nose clean and remained in the lead pack. Arscott took advantage on the final lap to steal the second spot for a return trip to the podium.  As a result of his trademark consistency, Arscott will be the point leader heading to Phoenix in late February.

Boosting RPG’s strong performance as a team in Tucson were three impressive rookie drivers in Senior Max. Junior standouts Luke Selliken and Blaine Rocha, along with rising star McKay Snow, joined the ranks of the Senior category in Tucson this past weekend. Selliken was climbing the time sheets all day on Saturday until he was shoved off the course on the final lap, eventually being classified in 21st. He bounced back to drive to an impressive fourth place finish on Sunday. Taking on the established drivers in Senior is certainly a daunting task, but Selliken used the weekend to continue his development and his run on Sunday proved that he’ll be in the fight all year long.  Likewise, Rocha was battling inside the top-10 on Saturday until contact dropped him down the order and outside the top-25. The 2013 Junior Max champion rebounded in a big way on Sunday, driving to an impressive sixth place finish while recording the fast lap of the race. Snow showed improvement throughout the weekend, coming from a 22nd place on Saturday to 13th on Sunday, running lap times similar to that of the race leaders.

“I couldn’t be happier with the performance of our Senior drivers,” stated Rolison. “Arscott is right back into his championship form, and victories are the goal at the next round. Our rookies improved and adjusted well in making the jump to the Senior ranks. We are going to keep working on racecraft with them, as we know they all have the speed to be competitive at this level.” 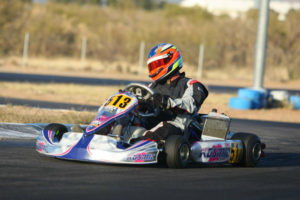 Brent Harper started out the year with second place both days in DD2 Masters (Photo: SeanBuur.com)

Texan Brent Harper joined RPG in Arizona, where he drove to a weekend of second place finishes in the DD2 Masters class. Harper ran second in each and every session, from qualifying to the main event, on both days to leave Arizona with two trips to the podium.

The RPG roster in Masters Max grew to three on the weekend, when Bruce McKean flew down to Tucson to join Justin Peck and Chad Wallace after his son Parker was too ill to compete in Senior Max. Bruce suited up and put Parker’s kart back in action.  Peck recorded the best results for the group, coming from the tail of the field to ninth on Saturday and backed that up with a fourth place result on Sunday. McKean, making a return to the Challenge, drove to a pair of eighth place finishes on the weekend after flirting with the top-five. Wallace made his series debut, placing 14th on Saturday and improving to 12th on Sunday.

RPG team drivers Tait Blum and Josh Pierson competed in the Micro Max class. Both pilots gained national experience with the team in Tucson. Blum drove to a pair of top-15 finishes while Pierson had a top-10 on Saturday followed up by a 12th place run on Sunday. Connor Wick raced with the Rolison Performance Group as their only Mini Max racer in Tucson. The RPG supported driver had a solid day on Saturday, where he advanced into the top-10 in the Prefinal, and then drove to a top-five finish to end the first day of racing. It was his best Challenge of the Americas finish.  Sunday started with Wick qualifying comfortably inside the top-10. After a ninth place run in the Prefinal, Wick drove to a seventh place to end his weekend in Tucson sitting fifth in the point standings.

“The fields at the Rotax Challenge of the Americas are continuing to grow and become more competitive,” Rolison added. “Earning strong results is becoming harder by the event, and our team – drivers and mechanics – are committed to performing at our best. The first two weekends of the year were a great start to the 2014 season, and I see a lot of potential and growth for each of our drivers in the future.”

Rolison Performance Group is taking requests for Arrive-n-Drive programs or transportation opportunities at the remaining Florida Winter Tour and Rotax Challenge of the Americas events – along with early planning for the Superkarts! USA Pro Tour and Can-Am Karting Challenge. For more information on all the services that the Rolison Performance Group has to offer, visit www.rolisonperformancegroup.com or find them on Facebook.