Team RPG Kosmic went into the United States Rotax Grand Nationals weekend with hopes of multiple National Championships and Team USA tickets.  With a team of seven experienced Rotax racers and five Rotax Grand Final appearances under their belts, the team proved to be competitive across five classes and left Utah with another invite to the Rotax Grand Finals. 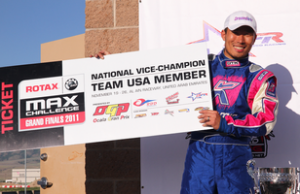 In his second year of DD2 competition, Derek Wang makes it two for two in earning the coveted Team USA ticket.  Despite being eligible to compete in the Masters ranks, the 33 year old opted to run in the DD2 category where he was dominant throughout the event.  Fighting off an injury that kept him away from karting for nearly a month, Wang captured pole position, wins in all of the heat races, and the win in the Prefinal.  As his competitors scrambled to find an answer all week, a challenger emerged in the final event when a mid-race battle left Wang trailing and taking the checkered flag in second place.

Despite missing the National Championship win, Wang was still invited to the Rotax Grand Finals in the United Arab Emirates in November.

“Obviously I am disappointed to be in 2nd after leading 85% of the laps over 5 races during the week, but I’m happy we have achieved the goal that we set from the early season”  Wang commented after the race.  “Going into Utah, I was unsure if I would be able to drive at all due to my dislocated rib.  But the team put in an extra-large padded seat, I wore multiple rib protectors, and I took several bottles of pain killers that got me through the week.”

The RPG Senior category drivers included 2010 National Champion Stepanova Nekeel and the rising star Kyle Byers.  Both drivers demonstrated tremendous speed as Nekeel qualified 3rd and Byers 15th in a tight group of 53 racers.  Byers went on to score a 3rd and 7th in the heat races while Nekeel takes 6th and a win in the heats.

With Nekeel starting 4th and Byers 8th in the pre-final, Nekeel raced his way to the point and takes the checkered flag in 1st by a healthy margin.  However, it was discovered in post-race tech inspection that the carburetor idle set screw had fallen out during the battle.  A part that only controls idle speed and has no effect on performance.  Nekeel would be forced to start from 34th for the final event.

Showing the speed of a true champion, Nekeel gained 27 positions in the 20 lap final to finish 7th.  Struggling with an engine problem, Byers finished 13th in his first Nationals appearance as a Senior.

Mike Daniel entered the weekend as one of the favorites in the field of 30 masters drivers.  Daniel qualified 8th and raced in the top 10 all week.  As a victim of rough driving, Daniel was forced into a spin during the pre-final and started final event in 25th place.  Using his vast experience and skill, Daniel came back in the main event by racing to an 11th place finish.

Team RPG junior drivers Parker McKean and Luke Selliken qualified 18th and 20th in a field of 42 junior drivers.  Using their national racing experience, the two stayed out of trouble and finished the weekend in 13th and 22nd.

McKay Snow finished his first US Nationals in 23rd out of 40 drivers.