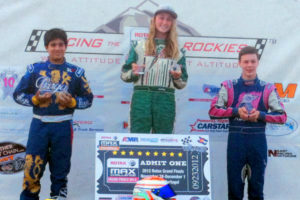 NEWBERG, OREGON (September 27, 2012) – Professional race team Rolison Performance Group journeyed to the Rotax Pan American Challenge Championship event, held at The Track at Centennial in Englewood, Colorado on September 20-23. After success this past winter at the Challenge of the Americas international Rotax series, two championships at the United States Rotax Grand Nationals, and titles at the regional level in the Pacific Northwest, RPG reached the podium once again at the Pan American event with Junior Max driver Luke Selliken scoring a third place finish against a stout field of international drivers.

Selliken was among the quick drivers during the official practice rounds Friday and converted that to a pole position in qualifying later that afternoon. His 54.360-second lap put his RPG Kosmic entry on the P1 grid spot for all three qualifying heat races on Saturday. Selliken began heat one with the lead but was shuffled back to fourth on the following lap. Come lap five, Selliken was pushed off track and was unable to continue, giving him a DNF. After making repairs and setting up for heat two, Luke came back with vengeance. He led wire-to-wire in the 12-lap event to score the win by one-second. He matched the same feat in heat three, driving to another one-second advantage for his second win of the day. With the DNF, he was classified sixth in the heat race point total, lining him up outside row three for the Prefinal. Gaining one spot on the opening circuit, Selliken ran fifth for much of the 16-lap race until the final circuit, working up to the fourth position before the checkered flag. Luke began the main event from outside row two, not the best spot for a start. He was shuffled back to the sixth position after the opening circuit with work ahead. By lap four, Selliken was back up to fifth and looked for his way to move forward. The final two laps saw heavy shuffling for position with Selliken benefiting, jumping up to the third position and earned a podium finish.

McKay Snow joined Selliken under the Rolison Performance Group tent, also competing in the Junior Max division. The weekend was a challenge for Snow, learning the circuit as the event unfolded as he made his first visit to The Track. McKay qualified 26th and improved his position in each heat race, recording a best finish of 20th in heat one and heat three. His results place him 22nd on the Prefinal grid. More improvement in speed put him 20th at the checkered flag of the Prefinal race and continued in the main event, scoring an 18th position.

“Luke did a great job once again, we just came up just short of our ultimate goal of winning this weekend,” commented Mike Rolison of Rolison Performance Group. “Selliken has become one of the top Junior drivers in the country, and his performance in Colorado proved it. Now we can turn our attention to clinching the SKUSA Pro Tour title in November. McKay improved each and every session on-track. The Track is very challenging with a wide variety of elevation and technical sections. Not having made any laps here before, Snow never quit and got faster as the weekend progressed. That’s all we can ask for each of our drivers.”