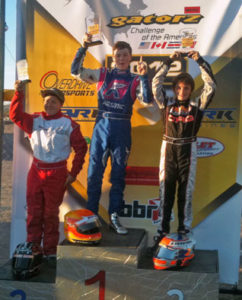 Luke Selliken, 1st Place in Saturday’s Final at the Gatorz Challenge of the Americas, Rotax Jr.

Here’s the write-up from eKartingNews.com:

Rolison Performance Group Junior Max
The Junior Max field started out the weekend with an exciting qualifying session that came down to the end. The top spot was shuffling around for most of the 15-minute run for the second group with Luke Selliken (Kosmic) finding the right setup near the end of the run to steal the pole position. Championship leader Parker Thompson (Tony Kart) tried to take the spot but came up 0.063 seconds short. Rookie Austin Versteeg (CRG) was third quickest with Zacharie Scalzo (LH) and Jim McKinney (Intrepid) rounding out the fast five. All the top five clocked in times within 0.072 seconds of a second.

A long line of Junior drivers navigated the PKRA circuit to begin the Pre-Main race, a distance of 17 laps. Selliken held the lead through the opening laps with a host of drivers behind him. Lap five, Thompson made his move by Selliken for the lead, brining Scalzo with him as Jake Craig (CRG) kept his composure in fourth. The lead group eventually was narrowed down to six drivers with 10 laps to go as they all were very close in lap times. At the checkered, Thompson scored the win with Scalzo and Selliken on his bumper. Versteeg was able to work around Craig for fourth with McKinney in sixth. 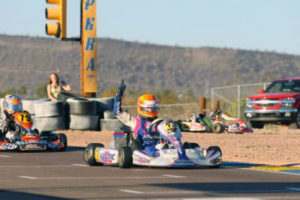 Ending the day with a great race, the Junior field put on a show for everyone to close out round three. Thompson led the field to the green flag but it was Scalzo showing the way at the completion of lap one. As the early laps clicked off, the top seven formed the lead group, with Thompson shockingly falling down the running order. As the front group continued to shuffle, Thompson stayed with the lead group as others, including Versteeg and Selliken, took their turn at the point. Lap 15 was Thompson’s final circuit as the rear bumper detached from his frame, forcing him to pull off and record a DNF. Meanwhile, Selliken was the driver on the move as he and Versteeg fought up front with McKinney and Scalzo right there. In the end, Selliken held on to score his first big victory in his career over the rookie Versteeg. McKinney scored a popular third place finish on the podium with Scalzo and Craig rounding out the top five.