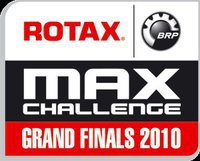 With less than a week before departing for Southern Italy for the Rotax Grand Finals at the La Conca circuit, Rolison Performance Group is preparing two drivers for the event. 2009 Team USA member Mike Daniel will join the 2010 Pan American DD2 champion Derek Wang on Team USA. The two RPG drivers will look to continue their 2010 success in the biggest international race of the season.

With a switch from the Senior category to DD2 in national competition in 2010, Derek Wang has proven that he has the speed to compete for the win at a national level. After clinching a Team USA ticket to the Grand Finals in July via a second place finish at the US Nationals, Derek continued his Pan American campaign and locked in the championship win prior to the last weekend in Fontana, CA. Having raced against the best Senior and DD2 drivers this year, Derek enters his first grand finals weekend with high hopes of a strong finish. Not leaving much to chance, Derek has spent the past two months preparing for the finals with a lot of on-track testing including a trip to La Conca. He will face a field of 70 DD2 drivers with the advantage of knowing the track and chassis.

After a successful 2009 campaign that lead to a DD2 Masters Grand Finals appearance in Egypt, Mike Daniel continued his dominance in the Masters category by winning the 2010 Gatorz Challenge of the Americas and the Pan American series. His success was rewarded with a Team USA ticket in the DD2 Masters category when another Team USA member was unable to attend due to injury. Since earning the ticket, Mike has ramped up his training regimen and put in hundreds of laps getting reacquainted with the DD2 kart. For the first time in 2010, the DD2 Masters will race under its own category at the Grand Finals with 35 drivers. Mike will look to end his year on a high note racing against several familiar faces in Italy.

“I’m very proud that two of my drivers that competed in our 2010 national campaign have made it to the Rotax Grand Finals. Mike and Derek have both put in a lot of hard work to get here. This will be RPG’s fifth appearance at the Grand Finals and I hope our experience will pay off in La Conca.” Said Mike Rolison, team principle of RPG.

Stay tuned to the Rolison Performance Group Facebook page for track side updates and pictures from La Conca throughout the Grand Finals week. The team departs for Italy on November 12th with registration starting on the 14th, kart raffle on the 16th, and on track action starting on the 17th. The World Champions will be decided on Sunday November 21st.