The 2010 US Rotax Grand Nationals will take place at the New Castle Motorsports Park (NCMP) just outside of Indianapolis the week of July 11. During this event, the best kart racers from the United States will compete for twelve “Team USA” invitations to the Rotax World Finals in LaConca, Italy. Having consistently produced national champions and Team USA drivers over the past five years, Rolison Performance Group enters the event as one of the favorites to grab invitations to Italy.

Reigning National Champion Mike Daniel will look to defend his title in the Masters category. In 2009, Mike earned his World Finals spot via his National title and represented USA in the DD2 category in Egypt. He didn’t rest on his laurels and won the Gatorz Challenge of the Americas in 2010. Currently, Mike D leads the championship in the Rotax Pan American Challenge which includes a win at NCMP in June. Mike will use his winning experience to his advantage during the Grand Nationals weekend. 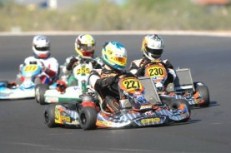 Joey WimsettHaving dominated a majority of the timed sessions, Joey Wimsett had to settle for third in the final event of the 2009 Rotax Grand Nationals in Oklahoma. Still having earned a Team USA invite, Joey became the best finishing American Senior driver in the 10 year history of the Worlds by finishing 4th. In 2010, Joey is racing for SSC East/CRG in the CKI Florida Cup and the WSK North American Series in the KF2 category. Having raced in NCMP several times in his career, Joey will jump back into his Rotax next week to take on the unfinished business from last year.

Derek WangDD2 new comer Derek Wang surprised the field when he qualified on pole in his first DD2 race in the Sonoma round of the Gatorz Challenge of Americas. Since then, Derek has proven that his success is no fluke by winning rounds 1 & 2 of the Rotax Pan American Challenge in Houston and again winning with a last corner pass in round 3 in NCMP. The former Senior driver has a comfortable lead in the Pan Am DD2 Championship and will look to join the “RPG Team USA Club” this year.

Unofficial practice for the 2010 US Rotax Grand Nationals will begin on Saturday July 10. Official practice begins on July 13th, qualifying and heats on the 15th-16th with the finals on Saturday the 17th. Join the new Rolison Performance Group Facebook fan page to receive track side updates and team driver comments. http://www.facebook.com/pages/Rolison-Performance-Group/127186247319642