ROTAX CHALLENGE OF THE AMERICAS CHAMPIONSHIP FOR VERSTEEG 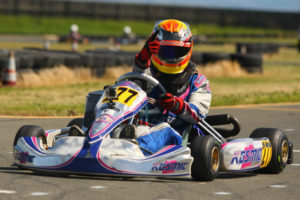 Versteeg crosses the line first, earning his third victory on the year at the Rotax Challenge of the Americas (Photo: SeanBuur.com)

SANDY, UTAH (April 9, 2014) – The Rotax Challenge of the Americas program came to a close for 2014 with Austin Versteeg among the championship contenders all season. A win at the opening round of the two stops on the schedule had the Rolison Performance Group driver set up for a run at the Junior Max championship, which included a ticket to the 2014 Rotax Grand Finals. Needing the to perform at his best, Versteeg stepped up to the challenge and left the Simraceway Performance Karting Center in Sonoma, California as the 2014 series champion and newest member of Team USA.

As he has done all series long, Versteeg was among the quickest drivers in testing and entered the finale weekend following a good performance in the Red Line Oil Karting Championship the previous weekend. Versteeg struck first during Round Five, coming through as the quickest driver in the qualifying session, taking home five points toward the championship. Austin added to his point total, earning 10 more with a win in the Prefinal after his RPG teammate suffered a starting penalty. This gave Versteeg the pole position for the 25-lap main event, where he engaged in a three driver battle for the win. A slight bobble near the halfway point dropped the Kosmic driver outside the top-five and took him out of contention for the victory. He never quit, pushing forward with the fast laps of the race to earn five more bonus points to finish the race in fourth.

“I was upset with myself after Saturday’s result,” stated Versteeg following the weekend. “I knew the mistake cost me a lot of points, but I never gave up and pushed as hard as I could to the finish. I didn’t reach the podium, but the point total was not as bad as it could have been.”

Each and every point mattered going into championship Sunday, as Versteeg found himself trailing in the standings. The game plan was set, and the first of three tasks was checked off after Austin scored his second fast time honors in qualifying to close the gap in the standings by five points. Those points were merely washed away however as a heated Prefinal race saw Versteeg fall to fifth in the order. Starting inside row three, the 25-lap Final gave the RPG driver enough time to make up ground. His Kosmic was quick in the first half, as he picked off positions lap by lap, reaching the lead by the eighth circuit. After some jostling for the top spot, Versteeg claimed the position, hounded by two drivers looking to score their first victory on the season. The pressure was high on the young pilot, and he never put a wheel in the wrong spot, reaching the checkered flag for his third victory on the season. Thanks to the fast lap bonus points going to another driver, and the final results in the favor of Versteeg, the championship was his by a slim three points.

This is the first ticket for Austin, as he will be part of Team USA to compete at what is considered the ‘Olympics of Karting’ – featuring over 250 drivers from around the world to compete for the Rotax world championship. 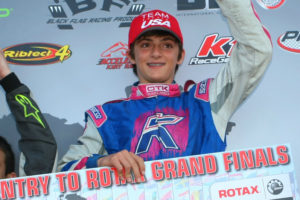 Austin was awarded a 2014 Rotax Grand Finals ticket with the Junior Max championship at the Challenge (Photo: SeanBuur.com)

“It was a great feeling to get the victory, knowing that I had to win for any chance at the championship,” added Versteeg. “The stress wasn’t over until we knew the results following tech, but when I accepted the Rotax Grand Finals ticket at the podium, I was thrilled. This could not have been possible without Mike Rolison, my engineer Brian Fletcher, and the entire crew under the RPG tent. I’m really looking forward to competing at my first ever Rotax Grand Finals later this year.”

At the end of March, Versteeg closed out his 2014 Florida Winter Tour campaign, finishing the year fourth in the standings. The finale weekend did not pan out as hoped, but the RPG driver fought for podium positions all weekend. He began the weekend qualifying 10th and third Friday afternoon for the two rounds of racing. Versteeg piloted his Kosmic chassis to a sixth place finish in the Saturday Prefinal before battling to retain a ninth place in the Final. Austin rebounded very well after slipping to seventh in Sunday’s heat race before finishing fourth. He fought hard to climb into a podium position for the final round of action, eventually settling into the sixth position at the checkered flag.

Visit www.austinversteeg.com for more information and to follow his path during the rest of the year.

Austin Versteeg is an up-and-coming name in the world of motorsports. The young Sandy, Utah native began karting at the young age of eight, and has done big things in a short amount of time. Racing locally at the Miller Motorsports Park in Tooele, Versteeg quickly moved on to the regional and national competition level in the sport. He has competed at the Rotax Challenge of the Americas, Florida Winter Tour and the Superkarts! USA Pro Tour, finding success in each including the 2011 Mini Max FWT championship. Austin has a victory under his belt north of the border, winning at the prestigious Le Monaco de Trois-Rivieres street race. Now into his third year in the Junior division ranks, Versteeg is primed at growing into a motorsports star.