ROLISON PERFORMANCE GROUP TOPS THE CHARTS AT US OPEN FINALE

ROLISON PERFORMANCE GROUP TOPS THE CHARTS AT US OPEN FINALE 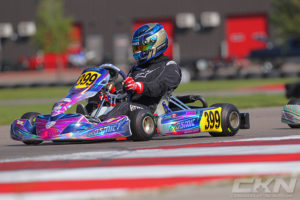 Photo: Kellen Ritter battles in front of pack in the Senior Max category

November 11, 2016 – Rolison Performance Group (RPG) brought home strong results in the final round of the Sofina Foods US Open series in Las Vegas, Nevada. With a solid line-up of drivers from North America and Australia, the RPG team managed to secure a win, a championship in the Masters Max division, and several top-10 finishes.

With six drivers entered in the category, Junior Max brought an action-packed weekend for the RPG team. Australian driver Reece Cohen had great speed all weekend. In the final, he battled hard throughout the race, coming across the line in sixth place. Cohen rounded out his strong finish with a third place in the series championship. Fellow Australian Travis Worton also had great speed, consistently running in the top-10 all weekend. After a bad wreck in heat 4, Worton came back for redemption in the final, working his way to a 13th place finish. Teammate Hannah Greenemeier (USA) battled in the top-10 throughout the event, carrying great speed into the final. Unfortunately, her weekend ended early with a DNF in the final. Jacob Gulick (USA) and Alexis Apodaca (USA) both brought home top-20 finishes in the competitive Junior Max field. Tyler Kozma (CAN) showed great improvements in every session in his US Open debut.

In Micro Max, Josh Pierson (USA) ran at the front of the pack all weekend, notably one of the fastest drivers in every session. After great finishes in the heat races, he came into the final with his sights set on the podium. Pierson battled for the third position down to the checkered flag, coming in fourth place by one tenth of a second. This solid fourth place finish allowed him to secure third place in the championship standings. Teammates Shawn Kozma (CAN) and Graham Trammell (USA) both made great improvements throughout the weekend in their US Open debuts.

The Masters Max category brought great results for the RPG team. Billy Cleavelin (USA) topped the charts all weekend, qualifying on pole and sweeping the heat races. In the final, he posted the fastest time of the race. Unfortunately, he experienced a flat tire midway through the race, causing him to fall down the running order. Cleavelin managed a fifth place finish in the final and clenched the series championship. Teammate Mike Groff (USA) made improvements and gained speed all weekend. In the final, he was able to find the last bit of speed he needed to make it to the front. Leading the field by over 2.5 seconds, Groff took home the win in his first US Open race.

In Senior Max, Canadian Kellen Ritter posted strong results in every session. Ritter came into the final round of the US Open from his first Grand Finals appearance in Italy. He carried this positive momentum into the finale, running in the top-10 all weekend. Ritter posted an eighth place finish in the final, and became vice champion of the series in his rookie year in the Senior Max category. Shay Mayes made his US Open debut after earning a ticket from securing the Rotax Heavy championship in Australia. Mayes was fast in all sessions of the event. Having to start in the back in the final after some unfortunate luck, he made his way into the top-10, ready to do battle. After the restart from a red flag incident on track, Mayes reported mechanical failure and finished his weekend with an unfortunate DNF. Teammate Carson Kapica (USA) ran strong all weekend, securing a 10th place finish in the final.

In Mini Max, driver Angus Giffen (AUS) was a strong contender in the front of the pack. In the final, he drove from the rear of the field to second place and battled for a spot on the podium. In the five kart battle for second place, Giffen was shuffled back to fourth with two to go, still battling strong. On the last lap, he made contact with the barrier and finished 14th. This was Giffen’s first time with the RPG team, and his impressive drive shows he will be a strong competitor in 2017. Teammate Rafe Abdulali (USA) posted fast times throughout his practice sessions. Falling ill halfway through the weekend, he fought hard to remain a competitive force on the track. After a tough weekend, he managed a 10th place finish in the final. This was also Abdulali’s first time with the RPG team and showed great improvements and speed all weekend.

RPG now heads into their final race of the season, the SuperKarts! USA (SKUSA) SuperNationals. Follow the team’s progress on Facebook at https://www.facebook.com/RolisonPerformanceGroup/.