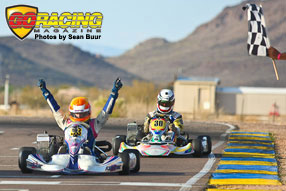 PHOENIX, AZ (February 29, 2012) – The second round of the Gatorz Challenge of the Americas program proved to be a breakout event for one of Mike Rolison’s talented young Junior drivers.  In the race held this past weekend at the PKRA facility in Phoenix, Arizona, Luke Selliken emerged with a pair of well-deserved victories in the ultra-competitive Rotax Junior Max category, putting him in the championship lead and into the national spotlight as well.  Piloting a Rolison Performance Group-tuned Kosmic Mercury, Selliken was never outside the top-three in any session, continuing his development as one of the nation’s up-and-coming Junior pilots.  Fellow RPG drivers Jake Preston and McKay Snow were also impressive in Junior Max, while Parker McKean, Kyle Byers and Kolton Griffin each stepped up on Sunday to finish in the top-15 in Senior Max.  It was a strong outing all around for the Rolison Performance Group squad.

“I’m incredibly proud of how Luke performed this past weekend and I’m thrilled with the success he’s enjoying,” commented Rolison, one of the sport’s leading driver coaches and tuners. “We’ve had him in our program for almost two years now and all the hard work and training is paying off.  He’s going to be a force this year!”

“Our program has been designed to help our customers achieve their goals and to see our guys move up the order through the weekend is very satisfying,” Rolison continued.  “I want them all on the podium, and that’s how we approach each and every event.  We work hard between sessions and at the end of each race day by going over the data and establishing a game plan for the next day, and when we can come out and improve, I know we’re doing the right things.”

Selliken led the RPG brigade by placing himself at the forefront in the Junior Max qualifying session on Saturday morning.  He stormed to the pole position over a stout 34-kart field by laying down a 45.474-second lap to secure the front row start for the Pre-Main.  Fellow RPG pilot Jake Preston was eighth in the order, while rookie junior McKay Snow was a stellar 12th, keeping the entire squad in the top-15.  In the Pre-Main, Selliken ran in the lead trio with quick Canadians Parker Thompson and Zacharie Scalzo, taking third at the end of the 17-lap run to set up his bid for the win in the Main.  Preston and Snow were each able to advance, as Preston grabbed a single spot to take seventh while Snow moved into the top-10 with a solid 10th place result.  In the main, Scalzo led early but Selliken was not to be denied, as he methodically worked his way to the lead on lap 16 and was never headed en route to the win. Preston was able to maintain his position and finished sixth, while Snow got punted off the course while running in the top-10 and needed to fight back to finish 18th in the final tally. 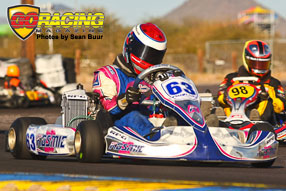 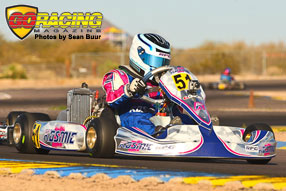 The performance of Selliken continued on Sunday, as he trailed Thompson by just 0.012 seconds in qualifying.  Preston and Snow maintained their pace to remain in the top third of the grid, timing in 10th and 12th, respectively.  A 10-second penalty for jumping the start in the Prefinal put Selliken back to seventh after he had finished third, but despite the setback, he worked quickly into the top-five to start the 25-lap main event.  Once attached to the lead group, Selliken fought his way forward and chased down Thompson over the early laps as the top-three again pulled away from the rest of the field.  A late-race showdown was all but a given, that is, until Thompson was sidelined with a mechanical, leaving the door open for Selliken to score the double.  Luke would not put a wheel wrong for the remainder of the distance, showing amazing poise in taking a 0.308-second victory to sweep the weekend’s mains.  Selliken now leads the standings by 16 points heading to the season finale in Fontana next month.  Preston, who has been coached by Rolison for the last six months, recorded his second sixth-place result of the weekend to wrap up a very successful event for the driver who is only beginning his second season in Junior competition.  Likewise, Mini Max graduate Snow has been working with RPG for almost a year and finished Sunday off with an 11th place performance. The results that he has put down to begin 2012 are extremely encouraging.

Rolison Performance Group has a group of emerging frontrunners in the Senior Max category as well.  Kyle Byers led the way for the team in Saturday qualifying with a 46.111-second lap that slotted him 12th in the 37-kart line-up.  Byers was just over six-tenths off the pace of the polesitter, but was less than five-hundredths off a spot in the top-10.  McKean was 17th in the timed session, while Kolton Griffin, who joined the RPG team for this event, was 20th.  McKean was the man on the move in the Pre-Main, powering up to 11th to set up a drive in the main, while Byers finished 21st after mid-race contact. In the main, McKean continued his recovery from his qualifying run and advanced to ninth by the checkered flag, his third straight top-10 of the season. Byers was not quite so fortunate, as the chaos that can often describe mid-pack collected him in this race, putting him on the sidelines on lap 9.  Griffin battled a motor issue in the PreMain and his troubles continued in the main where he was unable to finish the 25 laps.

During the Saturday night technical analysis, Rolison and his Senior pilots worked diligently to plan their attack on Sunday’s races with the focus on avoiding the perils that plagued them that day.  The results of this added effort were positive.  The adjustments to their chassis set-ups helped McKean turn the seventh quickest time in qualifying, just over two-tenths off the pole.  Byers ended up 15th, again in the front half of the grid.  McKean was able to capitalize on his solid qualifying performance to finish eighth in the PreMain, a couple positions ahead of Byers, who advanced to 12th. Griffin turned his effort up a notch in the PreMain, knifing his way from 30th to 23rd as his charge forward was underway. 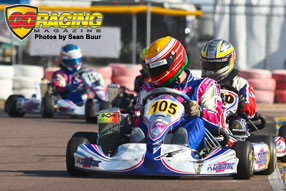 All three of Rolison’s Senior drivers were impressive in the Sunday final, as the trio filled the top-15.  McKean finished seventh in the final tally, continuing his streak of top-10 finishes, while Byers was on the move up to eighth to put two RPG pilots in the top-10.  Griffin’s final run was his most impressive of the weekend as he recorded a 15th place finish to bounce back from his issues in qualifying.  In the point standings, McKean sits seventh overall, while Byers holds the 13th spot, just three points behind his closest challenger.

The Rolison Performance Group team will now look forward to the series finale in Fontana, CA on the March 30 – April 1.  Selliken will be aiming to secure the Junior Max championship and the accompanying ticket to the Rotax Grand Finals in Portugal as part of Team USA.  For the remainder of RPG’s young team, consistent performance could mean impressive overall finishes in the top-10.

For more information on all the products and services that the Rolison Performance Group has to offer, visit www.rolisonperformancegroup.com .  RPG has arrive-and-drive opportunities for the Challenge of the Americas finale in Fontana, as well as the SKUSA Pro Tour SpringNationals in Phoenix in April. Anyone interested in being part of this winning program should contact Mike Rolison via e-mail at roli5000@hotmail.com.