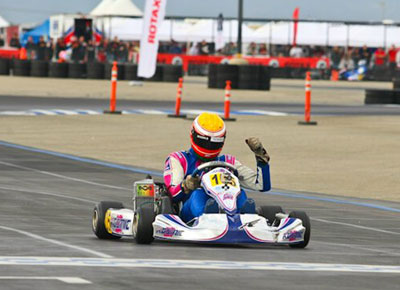 FONTANA, CALIFORNIA (April 5, 2012) – The Rolison Performance Group helped guide another driver to a breakthrough victory to help celebrate a great start to the 2012 season. Competing at the Gatorz Challenge of the Americas finale this past weekend (March 30-April 1), Mike Rolison and his squad of young, talented drivers continued to improve under his guidance aboard their Kosmic Racing Karts. Rounds five and six of the international Rotax Max Challenge program took place at the CalSpeed Karting facility in Fontana, California. The challenging circuit was the site of RPG driver Parker McKean’s first Senior victory as he dominated the Saturday events while Junior Max driver Luke Selliken ended the series second in the championship standings.

“This weekend was a great way to close out the first quarter of the season,” stated Mike Rolison of Rolison Performance Group. “The progress the team and our drivers have made in just the first three months of the year is incredible. I’m pleased with the results we have achieved and proud of the accomplishments from all of the RPG team drivers. Helping McKean score his first Senior victory and guide Luke to the vice-champion spot in Junior shows the talent we have here in our tent and how well the Kosmic chassis and OTK products perform.”

McKean was the lone RPG driver in the Senior Max category for the weekend, working with veteran Mike Beeny as his mechanic. Qualifying sixth with a fast lap of 51.021, McKean and the Rolison Performance Group squad found more speed in the Pre-Main. Running the fast laps of the race, McKean knifed his way forward to the second position, running down the leader lap after lap. Starting from the off pole position in the Main Event would be a challenge, as the outside line through the opening corner lacked the grip of the preferred line. McKean would master the opening corner and the first lap, crossing the line in the lead. After some shuffling for position, McKean settled into the second spot to set up for the long 25-lap event. By the halfway mark, Parker retook the lead. With consistent laps, posting his fastest on the final circuit, McKean drove away to a one-second victory.

Parker was poised at repeating his feat from Saturday on the following day, qualifying third but losing a bit of speed in the Pre-Main to finish fourth. The start of the Final did not bode well for McKean as he was shuffled back to 14th in the opening lap. With grit and determination, Parker drove his way up to ninth. His final results promoted him to fifth in the final championship standings, a great way to end his Senior debut in the series. 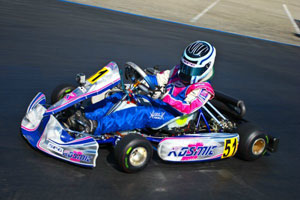 Junior Max driver Luke Selliken entered the weekend leading the championship standings by a slim margin. The weekend began strong for the RPG Kosmic driver with a third in qualifying for round five. Luke fell back a few positions at the start of the Pre-Main, but worked his way into fourth by the checkered flag. The start of the race hurt Selliken’s opening laps, as once again he was shuffled back out of the top-five. With a pace similar to that of the leaders, Luke finished in the fourth position. Fellow RPG drivers Kyle Wick, Jake Preston and McKay Snow drove a solid event. Wick was among the top-five all day, finishing just one back of Selliken in fifth after missing last month’s event. Preston was right there, placing eighth while Snow finished 15th. 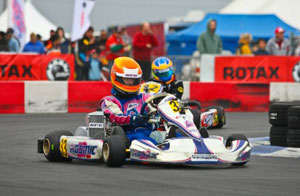 Sunday brought on the challenge of maintaining the championship lead for Selliken as the rest of the RPG drivers looking to improve on their Saturday performances. Selliken qualified fourth, lining him up on the outside of row two. As the Pre-Main event began, Selliken was struck by another driver. The contact hampered his Kosmic and he was forced to retire. Meanwhile, Preston drove up to finish fifth with Wick in eighth and Snow just outside the top-10 in 11th. The hard fought Main Event saw Selliken put in a stellar performance, coming from the tail of the field to place eighth. While the round counted as his drop in the title chase, Selliken was only classified second in the final championship standings, a stellar finish to his sophomore season in the series. Preston led the RPG group in the round six feature, matching his best finish of the season in sixth. Snow placed 12th with Wick in 14th, putting all four RPG-prepared Kosmic machines inside the top-15 for a second straight day.

The Rolison Performance Group team will now return back to the Pacific Northwest to prepare for the upcoming Superkarts! USA Pro Tour opener – the SKUSA SpringNationals – at the PKRA Formula K Raceway in Phoenix, AZ. The focus is starting the five-round championship with solid results at a familiar track while building off the momentum gained in the last two months. The RPG regional program will begin the following weekend as the Northwest Gold Cup begins its 2012 season in Richland, WA on April 27-29.

For more information on all the products and services that the Rolison Performance Group has to offer, visit www.rolisonperformancegroup.com .  RPG has arrive-and-drive opportunities for the SKUSA Pro Tour SpringNationals and all Northwest Gold Cup events for 2012. Anyone interested in being part of this winning program should contact Mike Rolison via e-mail at roli5000@hotmail.com.