TOOELE, UTAH (July 25, 2012) – The Rolison Performance Group contested the second stop of the Superkarts! USA Pro Tour – the SummerNationals – at the Miller Motorsports Park in Tooele, Utah. Led by Mike Rolison, the professional race team visited the top-class facility after success a year ago for the US Rotax Grand Nationals. The team came into the July 20-22 weekend off strong finishes at the regional level, as well as the opening stop of the SKUSA Pro Tour – the SpringNationals – back in April. In total, RPG drivers gained four podium trips with a combined seven top-five finishes – highlighted by the breakout performances of Kyle Wick and Jake Preston. It was an impressive weekend for the duo, each making their Pro Tour debuts. Both have been working with the Rolison and the RPG staff for just eight months, making huge strides on and off the track in Rotax and TaG Junior competition.

Preston was consistently in the top-five all weekend long. Placing top-four in the two heat races, he battled in the lead group for Saturday’s feature race. Leading twice in the 16-lap event, Jake was pushed back to the fourth position in the final lap. Once again in the hunt on Sunday, he drove to finishes of second and fourth in the day’s heats. Preston would run the main event in second for much of the race, placing third at the checkered flag. 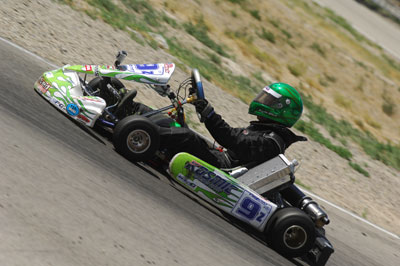 Wick was in the top-five throughout Saturday, winning the first heat race. Starting fifth in the feature, Kyle was shuffled outside the top-10 after the opening laps. Matching the pace set by the leaders, he was able to climb back up to the seventh position by the checkered flag. Wick was the pace setter on Sunday, leading the way at the end of both heat races to start the feature from the pole position. Wick lost the lead after the opening lap and fought strong to keep a podium position, but missed out in the end, earning a respectable fourth place.

“We have built our race team program around driver development, focusing on how to make each and every driver achieve his or her goals,” stated Mike Rolison of the Rolison Performance Group while returning to the RPG headquarters in Oregon. “It’s our mission to welcome any driver with any type of racing background, groom them at the local and regional level and take it to the next level, winning at the national stage. The work we’ve done during the winter months at the Gatorz Challenge of the Americas transitioned to success at the regional level and now on the SKUSA Pro Tour. I couldn’t be happier for both Kyle and Jake, and look forward to great results from them in the near future.” 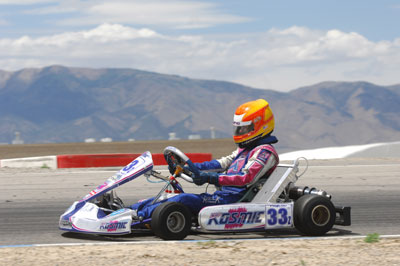 The Rolison Performance Group TaG Junior roster combined for five top-five finishes in the two feature races on the weekend. SKUSA Pro Tour championship leader Luke Selliken maintained the top position overcoming adversity through the weekend. Selliken was among the top drivers in practice and the morning warm-up aboard his RPG Kosmic entry, but an issue with his powerplant dropped him to 22nd in qualifying. Pin-pointing the problem, Luke drove up to ninth in the first heat race and seventh in heat two, on the heels of the lead group. He would continue his drive forward, eventually working up to second by the checkered flag of the feature for his third straight trip to the podium. Sunday qualifying faired better than the previous day’s session, as he ended up fifth in the session. Luke went backwards in the first heat, falling to 10th in the eight lap run. The team elected to change engines between heat races, and with the change came a grid position penalty to drop him back to 20th. As he did Saturday, Luke battled back to finish ninth and from there to fifth in the main event to end another solid weekend in his first Pro Tour season. McKay Snow completed the RPG roster for the weekend and contact limited the final results for the Utah driver, placing 17th and 19th over the two days.

Victory hardware came to the RPG tent courtesy of driver coach Joey Wimsett, as he piloted his CRG to the S1 Pro Stock Moto win on Sunday. Wimsett was the quickest driver on the weekend, sweeping Saturday’s action – qualifying on pole, winning the two heat races and scoring the feature victory while posting fast lap honors. A duplicate day was in the works on Sunday until a broken chain on the final corner kept him from crossing the finish line. Starting from the 15th position, Wimsett put on a show for the fans as he drove up to the third position in the 20-lap feature race to earn his fourth podium trip in as many rounds. 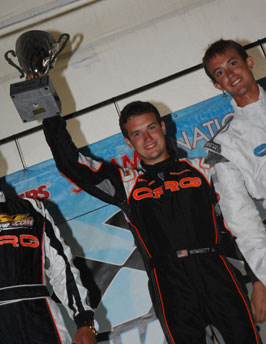 Wimsett’s addition to the Rolison Performance Group program has helped to elevate the shifterkart program under the RPG tent. The success of Parker McKean on the weekend shows the diversity of Rolison and the entire staff. McKean made his Pro Tour debut aboard a Kosmic shifterkart in the competitive S2 Semi-Pro Stock Moto class. On the edge of breaking into the top-10 all day Saturday, Parker advanced his way forward in the feature race to end up seventh, nearly matching the pace set by the leaders. Sunday was much of the same as McKean climbed his way forward through the heat races and the feature. Parker laid down the third quickest lap of the main event en route to another seventh place performance.

Also working with the RPG crew in Utah, as he has in recent months, was TaG Cadet driver Sting Ray Robb. The Idaho pilot overcame incidents that sent him toward the back of the 18-kart field both days. On Saturday, heat one was his nemesis, but determination and talent took him to sixth at the end of the feature. Robb was moving his way toward a podium finish on Sunday when contact midway through ended his chances, eventually climbing back to finish ninth.

“Joey’s addition to the RPG program has been immense,” continued Rolison. His work with Luke is showing and I think it’s transitioned to Joey’s work behind the wheel as well. Both will be gunning for victory and the titles at the SuperNationals. Parker’s shifterkart debut was excellent. He managed his tires well throughout the day and was among the quickest at the end of the main events. It was a strong weekend overall and I’m looking forward to the upcoming events with these drivers and their families.”

The Rolison Performance Group squad is now preparing for the upcoming US Rotax Max Challenge Grand Nationals on August 8-11 in South Bend, Indiana. Arrive-and-drive positions are still available for those drivers looking for a chance to compete against the best Rotaxians in the USA, and have a chance to earn a trip to the Rotax Grand Finals in Portugal. Packages are also being accepted for the Rotax Pan American Challenge event in September and the SKUSA SuperNationals XVI in November. Those interested are encouraged to contact Mike Rolison as soon as possible. Spots are also available for the Pan American Challenge championship event as well later in the year. To learn how you can be part of this unique and professional race team, visit www.rolisonperformancegroup.com for more about their services and products available or find them at www.facebook.com/RolisonPerformanceGroup