ROLISON PERFORMANCE GROUP ON THE PODIUM AT US ROTAX GRAND NATIONALS 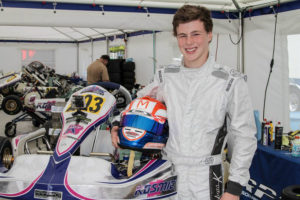 In one of the many massive fields that filled the grid in North Carolina, the Junior Max category reached nearly 60 drivers with RPG fielding four in what was the largest class of the weekend. After qualifying fourth quickest in group one, Selliken moved on to the exciting Super Pole session to determine where the top six would start. Selliken’s green-white-checkered run put him fifth in the final classification, and the front driver of the D group for the heat races. In his heat races, Selliken made the best of starting outside the front row each race to record finishes of third, second and second. His results placed him third on the Prefinal grid. After getting shuffled back early, he would go on to finish the race fifth. The green flag dropped for the final time, with Selliken looking for a podium finish. He slowly worked his way up the running order as he took the third spot away just after halfway. Selliken would hold the position and collect his first podium finish at the Rotax Grand Nationals.

Rotax Challenge of the Americas Junior Max champion Blaine Rocha qualified 16th quickest overall. Rocha would compete in the D group along with teammate Selliken. Rocha ended the heat races with mixed results, placing 13th, ninth and continuing on from an opening lap wreck to place 21st. The results placed him 25th on the Prefinal grid, where Rocha drove a terrific race to gain ten positions to place him 15th in the results. Unfortunately, Rocha would be involved in an opening lap wreck that sidelined him for the 20-lap event.

The eKartingNews.com US Rotax Driver Rankings number one driver McKay Snow started the week off qualifying 29th overall, but continued to improve as the heat races took place. He earned results of 16th, 11th and a best finish of fifth to place him 15th on the Prefinal grid. Staying away from trouble, he gained two positions in the 14-lap event to start the feature inside row seven. An up and down 20-lap run in the final saw him drop as low as 22nd, but ended with Snow methodically moving his way up the running order on his way to a 16th place finish bettering his result from a year ago. Colorado’s Grant Copple joined the team for the Rotax Grand Nationals. He would qualify 35th and not produce the results as hoped in the heat races, placing 25th, 27th and 15th. Forced to race in the Last Chance Qualifier, Copple put his head down and was able to earn the sixth and final transfer spot to Championship Saturday. Gaining just three spots in the Prefinal, Copple found more speed in the main to end the event in 25th. 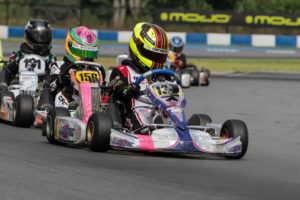 Sting Ray Robb and Sean Groenstein represented the RPG operation in the Mini Max division. Robb was 20th after qualifying, and put him in recovery mode, in which he responded. The Rotax Challenge of the Americas champion drove to top-10 finishes in each heat race, including some fast laps of the races, to start the Prefinal in 10th. Robb didn’t slow down a bit and ran to his highest result of the weekend so far thanks to a great run that landed him in the seventh place, setting him up for a great run in the final. Unfortunately, Robb’s constant climb up the leader board would suffer a setback at the start of the main event, dropping him down to 20th in the order. Robb would leave North Carolina with an 18th place finish. After qualifying 33rd, Groenstein struggled to gain positions in the opening two heat races. The third run saw Groenstein turning up the wick and gaining eight positions. Starting the Prefinal Saturday morning in 35th, Groenstein was once again on the move as he advanced up to 25th. Never giving up throughout the week and staying hungry till the checkered flag allowed Groenstein to improve to a near top 20 finishing position in 21st, improving on his finish from a year ago in just his second season in the class. 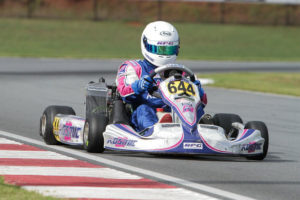 A fourth place finish in Masters Max for Corey Mitchell was his best performance at the Rotax national championship (Photo: Ken Johnson – Studio52.us)

Waving the RPG banner in the competitive Masters Max division was Corey Mitchell and Justin Peck. Mitchell came out of the box swinging in qualifying as he ran the fourth quickest lap of the session. Unfortunately, a dragging bumper would end Mitchell’s first heat pre-maturely and lost some positions in the second heat race to finish eighth. Mitchell recorded his best finish in heat three, maintaining the fourth spot to start the Prefinal in 11th. Gaining five positions in the 14-lap battle, Corey placed sixth for a row three start in the main event. A very solid run in the final secured Mitchell a top-five finish, coming just one position short of the podium to end the week where he began. Peck struggled early on but bounced back on Championship Saturday. Qualifying 18th, he would finish the opening heat race in the same position, and would be unable to break the top-20 the remaining races, including the Prefinal. Able to avoid carnage and attrition in the opening laps of the main event, Peck put himself inside the top-10 and ended the 20-lap battle in the seventh position to end the week on a high note. In Rotax Senior, the RPG team supported Northeast driver Thomas Roth. Thirty-second after qualifying, Roth scored top-15 finishing positions in all three heat races with a 13th, 12th, and 15th place finishes. Roth had a great run in the Prefinal to line him up with a good starting spot in the Final thanks to a 23rd place finish. In the main event, Roth would improve on his starting position to end up 20th in his first Rotax Grand Nationals.

For more information on all the services that the Rolison Performance Group has to offer, visit www.rolisonperformancegroup.com