NEWBERG, OREGON (April 19, 2013) – When the Rolison Performance Group set up shop in the pits of the Musselman Honda Circuit in Tucson, Arizona for the 2013 Superkarts! USA SpringNationals, they were fully prepared and ready to aim for the top of the podium. The RPG squad was back on the road from their Pacific Northwest headquarters after enjoying an extremely successful opening quarter of their season, and the first event of the SKUSA Pro Tour promised a continuation of this level of performance.

The team had already made two trips to Arizona for Rotax Challenge of the Americas events, so this return to the desert heat was welcome, considering the cold temperatures in the north.  The team stayed true to its current 2013 form, as all the RPG drivers put in great opening weekends on the SKUSA Pro Tour. A trio of team pilots was in the forefront of the action in TaG Junior as Luke Selliken, Blaine Rocha, and McKay Snow all enjoyed big outings. Sting Ray Robb competed in the TaG Cadet class and found success, while Kory Estell made a solid national debut in the S2 category. 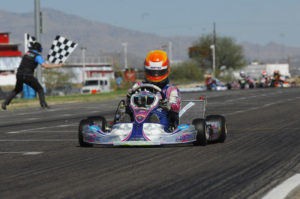 In TaG Junior, Rolison fielded three drivers in what was a stacked field of young talent. Perhaps the most interesting storyline buzzing through the pits at the start of the weekend was the absence of RPG driver and reigning TaG Junior class champion Luke Selliken from the Friday practice sessions. Due to school commitments, Selliken would be forced to miss all six rounds of practice, as well as qualifying for round one Saturday morning. The #1 plate holder arrived at the track a little more than an hour before his first heat race and despite the monumental challenge of not being in the kart until the warm-up lap of his first heat race, Selliken proved to everyone why he is the reigning Pro Tour TaG Junior champion. In his first heat, using great poise and race craft, Selliken picked off a kart or more every lap for the first four laps. Between the two heat races on Saturday, Selliken improved 13 positions from his dead last start spot, putting him in a decent position to attack the top-five. In the main, Selliken gained five spots on the first lap, vaulting him into a race-long battle. Selliken finished the 18-lap main event just outside the top-five, carding a sixth place finish that was remarkable, given the circumstances.

If Saturday’s masterful charge from the back did not prove why Selliken was awarded the national number one plate in 2013, his absolute domination on Sunday removed all doubt. Selliken swept the second day of competition after earning the pole in qualifying, winning both heat races, and besting all challengers in the main event, earning him a perfect point day in the Pro Tour championship. All in all, this was a strong start to his championship title defense. 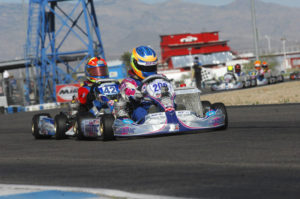 While Selliken was coming up to pace on Saturday afternoon, Blaine Rocha picked up the slack and kept RGP at the top in TaG Junior. The eKartingNews.com Driver of the Month for March put his Kosmic eighth on the grid after qualifying on Saturday, but he would show much more in the heat races and main event. Rocha went on to win both heat races, and put the RPG logo on the top step of the podium in the main event, winning the first round of the 2013 season by a scant margin.  On Sunday, Rocha stuck close to Selliken with a second-place finish and a 10th in the two heat races. Rocha recorded an eighth place finish in the main event on Sunday after contact on the final lap while fighting for a podium position dropped him down the order.

The third Rolison Performance Group driver in the TaG Junior class was Utah pilot McKay Snow. Snow had an up-and-down day on Saturday after qualifying inside the top-15.  McKay set his sights on moving up in the heats, however, in the first 10-lap sprint, he went backwards and recorded a 20th place finish. The second heat race saw a much better showing, as he worked his way back inside the top-15 by racing to 14th, which put him on the outside of row seven for start the main event. After getting shuffled to the back of the pack on the second lap of the main, Snow went to work and slowly rallied. At the checkers, Snow had recovered to 16th, and then wisely focused his attention on Sunday, which would bring a new day and a new chance for success.

The second round of the Pro Tour was a better day overall for Snow.  A 15th place qualifying effort set him up for the pair of heat races. The TaG Junior class is incredibly competitive, and Snow battle to advance a single position in the first heat race.  In the second moto, which set the grid for the final, Snow enjoyed his best effort of the weekend as he worked up to as high as eighth on the track, before ending the second heat in 11th place, right behind teammate Blaine Rocha. The main event saw Snow involved in an epic battle for a top-10. In the end, Snow would finish the 18-lapper in 12th place, capping off a solid opening two rounds of the Pro Tour.

The team’s youngest driver – Sting Ray Robb – had a weekend of contrast. On Saturday, Robb was the second quickest driver in morning warm-ups and then qualified his RPG Tony Kart with the sixth quickest lap of the session. A back and forth race with another competitor in the first heat saw Robb improve up to third when they came across the start-finish line. The second heat race went even better for Robb as he moved up from third quickly to race with the polesitter. Robb got around the driver on two occasions, the second time coming on lap four. Robb would go on to score the win in the second heat race, earning him the all-important inside spot on the front row for the start of the main event. Robb’s main event did not go as well as hoped, but finished off much better than it looked like it would have. Starting P1, Robb fell out of the lead on the opening circuit, and dropped as far back as sixth on lap eight. Robb stayed focused and drove back to the front, racing hard over the last two laps. In the end, Robb pulled out a spectacular drive to go from sixth to third in four laps, finishing Saturday with a podium finish. Sunday was not as successful, as an engine issue put him behind the eight ball from the get-go. Robb qualified 23rd and after a necessary engine change, he would need to start the first heat from the tail of the field. After a 22nd place finish in the first heat, Robb worked his way up to 15th in heat number two. The main event saw Robb break into the top-10, until the set-up went away. Robb finished the main event on Sunday with a 13th place finish.

In S2, RPG’s sole shifter entry was Washington racer Kory Estell. The SpringNationals marked Estell’s first-ever national race in only his second season in an S2 machine. The newcomer got faster each time he hit the track. Estell demonstrated quality racecraft in the first heat on Saturday as he maneuvered his CRG from a 33rd place starting position to a 25th at the checkers. The second heat saw Estell improve once again, up to 21st. In his first national main event, Estell stayed focused and carded a strong 17th place finish in a stacked field of 34 drivers. Estell would once again have to come from the back on Sunday after a difficult qualifying effort that placed him 31st for the start of the first heat. The slow lap in qualifying did not damper Estell’s spirits. Picking off at least one kart per lap for the first seven circuits, Estell went from 31st at the start to 16th at finish line of the first heat. Despite moving up once again to 12th in the final heat race, Estell would record a DNF in the main, just three laps shy of finishing the weekend on an incredibly high note. The Washington driver’s strength in his debut performance was what the team at RPG expected, as Estell impressed everyone under the tent and in the paddock. Estell will most definitely be a force to be reckoned with this year in S2.