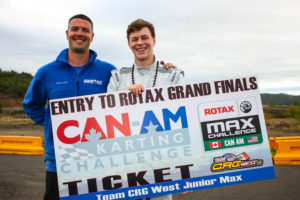 Rolison Performance Group has found success at each and every series they have competed in during the 2013 season (Photo: seanbuur.com)

NEWBERG, OREGON (October 10, 2013) – Results come from hard work and dedication. No matter the challenge, big or small, Rolison Performance Group is geared to guiding each and every driver they work with toward that goal. From the local scene up to the national and international level, Mike Rolison and the RPG operation is committed 100% to building and developing the tools – on and off the track – to reach that extra tenth in qualifying, finding the consistent setup, and reaching the checkered flag first.

In 2013, a number of RPG members aimed at reaching the Rotax Grand Finals, to be hosted for the first time on United States soil, held November 10-16 at the NOLA Motorsports Park in New Orleans. The ‘Olympics of Karting’ bring together over 300 drivers from 60 countries around the world to decide the Rotax champions of each season. Through the events thus far in 2013, Rolison Performance Group have guided six to be part of the Team USA squad next month. In March, Phillip Arscott and Blaine Rocha secured a ticket to the event through their championships at the Rotax Challenge of the Americas. The season finale also saw RPG driver Sting Ray Robb qualify for the Micro & Mini Invitational, to be held in conjunction with the Rotax Grand Finals. 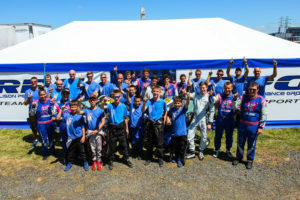 Mike Rolison and the RPG staff have helped to guide currently six drivers to the Rotax Grand Finals (Photo: seanbuur.com)

Last month, Rolison Performance Group wrapped up the regional season at the Can-Am Karting Challenge. Three championships were garnered under the RPG tent, along with three more tickets to the Rotax Grand Finals event. Robb added another title to his CV, earning top honors in the Mini Max division. This would help RPG driver Matthew Morgan earn the second ticket to the Invitational event, as he won the battle for third in the championship chase. Luke Selliken was nearly perfect on the Can-Am series, winning seven of the eight feature races and locking up the Junior Max title to earn his first trip to the Rotax Grand Finals. The third came via RPG driver coach Joey Wimsett, as the 2012 US Rotax Grand Nationals champion is set to make his second straight trip to the world Rotax championship.

This weekend, the Rotax Pan-American Challenge will take place at NOLA, with the four final tickets to be awarded to the Rotax Grand Finals, along with serving as a warm-up event for competitors around the world. A total of nine drivers will be representing the Rolison Performance Group during the October 10-13 event. Four drivers strong in the Junior Max division, both Selliken is testing the similar Energy chassis they will pilot for the Rotax Grand Finals, still working with the RPG staff to find the optimal setup and RPG Rotax horsepower. Fellow RPG drivers Rocha, Austin Versteeg and McKay Snow will pilot their RPG prepared Kosmic machines. Both Versteeg and Snow will battle for the final Rotax Grand Finals ticket available. Versteeg and Rocha were victorious last weekend at the Texas ProKart Challenge event in NOLA, boding well for the entire RPG contingent on site.

Also looking to gain a ticket to return back to NOLA in November for the Rotax Grand Finals is veteran Brent Harper. The Texan won the US Rotax Grand Nationals Masters Max division in 2011 at the Miller Motorsports Park, and is searching for his first bid for Team USA racing in the DD2 Masters class. RPG Masters Max driver Justin Peck is looking to secure one more strong result to end out the 2013 Rotax season, following a vice-championship at the Rotax Challenge of the Americas earlier in the season. The winner this weekend will be invited back to attend the Rotax Grand Finals as a special VIP throughout the event.

For the remaining three drivers making up the Rolison Performance Group will also be testing for next month’s Rotax world championship. Phillip Arscott is making his third trip to the Rotax Grand Finals, his last coming in 2009. Spending the summer in Europe working with the Global Formula Racing program in Germany through his studies at Oregon State University – where the team won the Formula Student Germany competition, Arscott is set at improving on his eighth place finish that year, testing the Sodi Kart that will be utilized in the Senior Max division in November. Robb and fellow Mini Max Invitational qualifier Trenton Sparks will join RPG in NOLA to help prepare for next month’s big event on the world karting stage.

Rolison Performance Group is set to field another strong contingent of drivers in next month’s Superkarts! USA SuperNationals XVII in Las Vegas. One of the largest events in the world, RPG is gunning for race victories and championships as the 2013 SKUSA Pro Tour finishes the year. Arrive-and-drive, along with pit spaces, will be available through the operation for those looking for a first-class, focused and well-prepared program against the tough competition. For more information on all the services that the Rolison Performance Group has to offer, visit www.rolisonperformancegroup.com