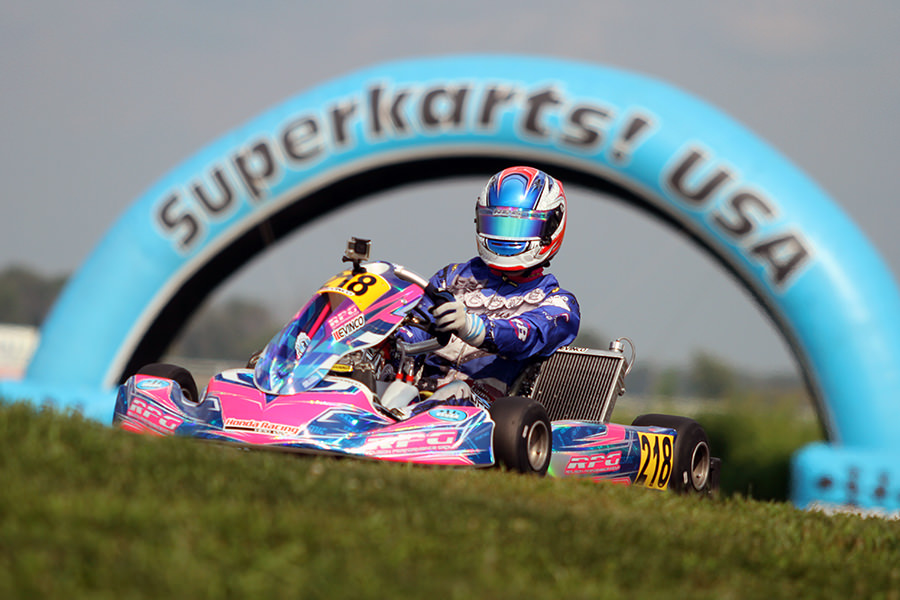 The 2018 Superkarts! USA Pro Tour championship came to an end at the New Castle Motorsports Park on August 10-12. The ninth edition of the SummerNationals decided the 2018 series champions, with the Rolison Performance Group engaged in the many title battles entering the weekend. The weekend saw multiple podium finishes in both the IAME and Stock Honda categories for RPG, along with wrapping up one championship and three vice-champion positions. 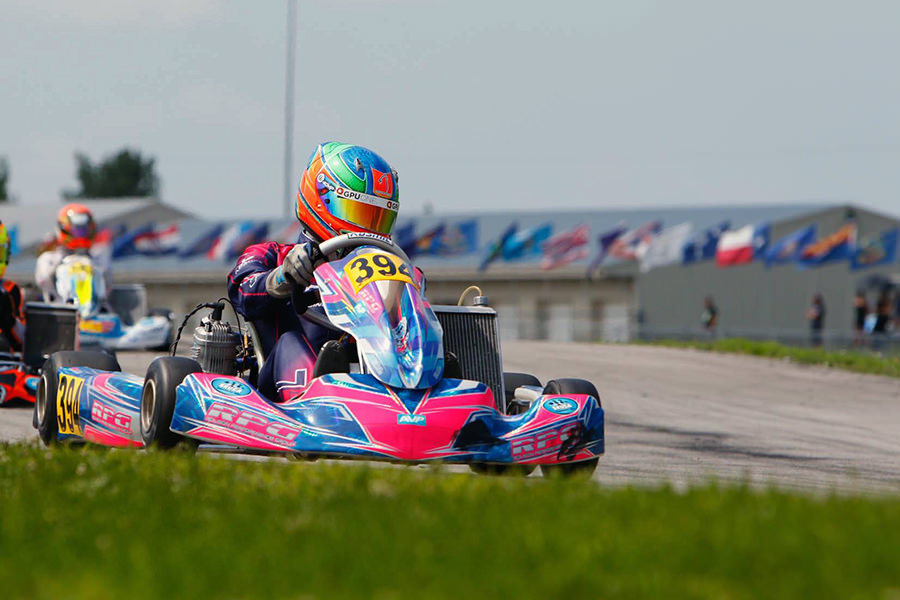 It has been a breakout season for Brazilian driver Pedro Lopes in the S2 Semi-Pro Stock Honda division. During his rookie year in a shifterkart, Lopes adapted quickly with the help of the RPG staff and the Kosmic Kart. Lopes won the first four main events of the championship, coming into the SummerNationals with a comfortable lead. Lopes did not show the outright speed he did at the two previous events, but remained in the hunt all weekend. Lopes recorded two third-place results to record six straight podium finishes on the SKUSA Pro Tour to secure the series championship.

The driver on a roll in 2018 is Canadian Samuel Lupien. Joining RPG last season, Lupien has established himself as one of the top drivers in North America. His most recent success was victory at the US Open / Rotax Grand Nationals in New Jersey at the beginning of July. Lupien entered the SummerNationals with a chance to battle for the SKUSA Pro Tour championship in X30 Senior. Saturday’s round did not pan out in Lupien’s favor, suffering a penalty that all but took him out of contention. Never quitting, Lupien bounced back on Sunday with his best SKUSA performance of the year. Samuel recorded fast lap in qualifying, besting the largest SKUSA Pro Tour SummerNationals field of 76 drivers. Winning his Prefinal, Lupien started the main event on the pole position. He would be shuffled nearly outside the top-10 at the start before fighting his way forward with fast laps of the race to earn the runner-up spot. His third podium of 2018 helped him gain the vice-champion spot and the SKUSA #2 plate for the 2019 season. 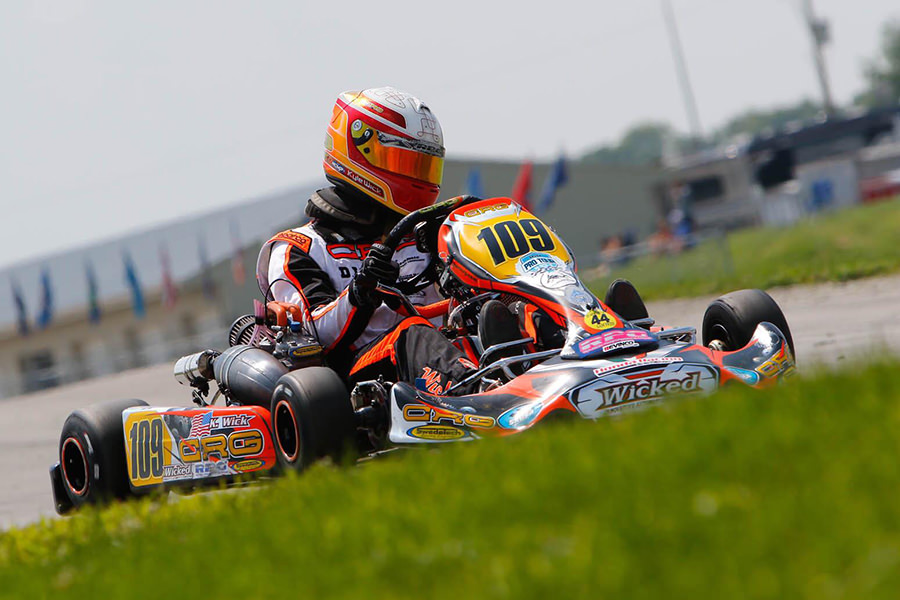 Also earning the second position in the 2018 SKUSA Pro Tour championship chases for Rolison Performance Group were Kyle Wick and Paulo Lopes. Wick completed his rookie season in the S1 Pro Stock Honda division, earning the SKUSA #2 plate for 2019. Wick’s year was highlighted by his first S1 victory at the SpringNationals, finishing the year out with two top-five finishes, including a third place on Sunday at New Castle. Lopes was the lone RGP/Kosmic driver in the X30 Master division. The Brazilian earned four straight podium finishes through the first two events of the SKUSA Pro Tour. Lopes showed speed in New Castle, earning fast time in the main event on Saturday. Penalties however kept Lopes off the podium at the SummerNationals, yet gained enough points to earn the vice-champion position in the point standings.

Another podium finish from the SummerNationals came from the youngest driver of the RPG operation – Graham Trammell. The Micro Swift driver was able to translate his success at the regional level to the national stage, earning his first SKUSA Pro Tour podium finish at New Castle. Trammell fought back from a DNF in the Prefinal to finish ninth in the Saturday main event. Sunday brought a more confident ‘GT’ to the track, fighting inside the top-10 to break into the top-five. In a wild Final, Trammell came away with the third position on the podium for his best finish of his rookie SKUSA Pro Tour season. 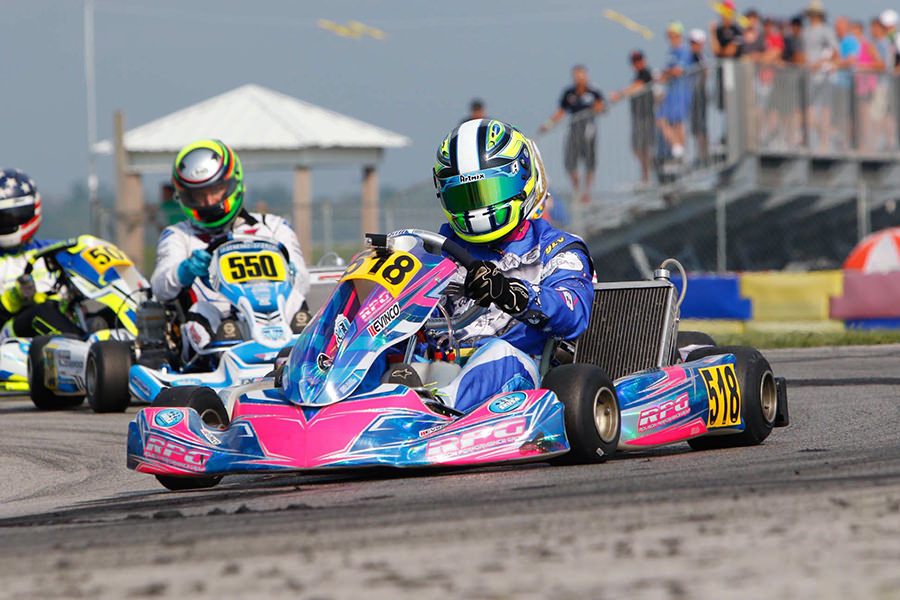 The Rolison Performance Group / Kosmic package continues to show speed in the X30 Senior and X30 Junior divisions. Many of the contenders involved in Senior fights came from the RPG tent, with all drivers making the main events on both Saturday and Sunday. Former SKUSA champion Luke Selliken returned to the Pro Tour for the SummerNationals, grabbing two top-five finishes on the weekend. Senior rookie Hannah Greenemeier, who finished runner-up to Lupien at the US Open / Rotax Grand Nationals in New Jersey, added another top-10 finish to her rookie season, earning the eighth spot in the final point standings. Emma Delattre also continued her improvement under the RPG/Komsic tent, placing 11th on Saturday. Junior drivers Josh Pierson and Branyon Tiner each showed speed on the weekend. Both qualified within the top-five on Sunday, only to have contact take them out of contention in the Prefinal and Final.

2018 continues on with the Rolison Performance Group looking ahead to a busy schedule before the year closes. RPG will be celebrating the Labor Day weekend at the upcoming California ProKart Challenge event at the Monterey Bay Karters facility on August 31-September 1. The next two weeks will be preparing for the series finale of the Can-Am Karting Challenge, scheduled for September 14-16 at the Pat’s Acres Racing Complex in Canby, Oregon. The next two months will be spent focused on testing and preparing for the Superkarts! USA SuperNationals 22 at the Rio All-Suite Hotel & Casino on November 14-18. Spots under the RPG tent in Las Vegas are nearly sold out. For more about remaining team spots for the SuperNats, or more information on becoming part of the RPG operation, head over to RolisonPerformanceGroup.com and follow their success on Facebook, Twitter and Instagram. 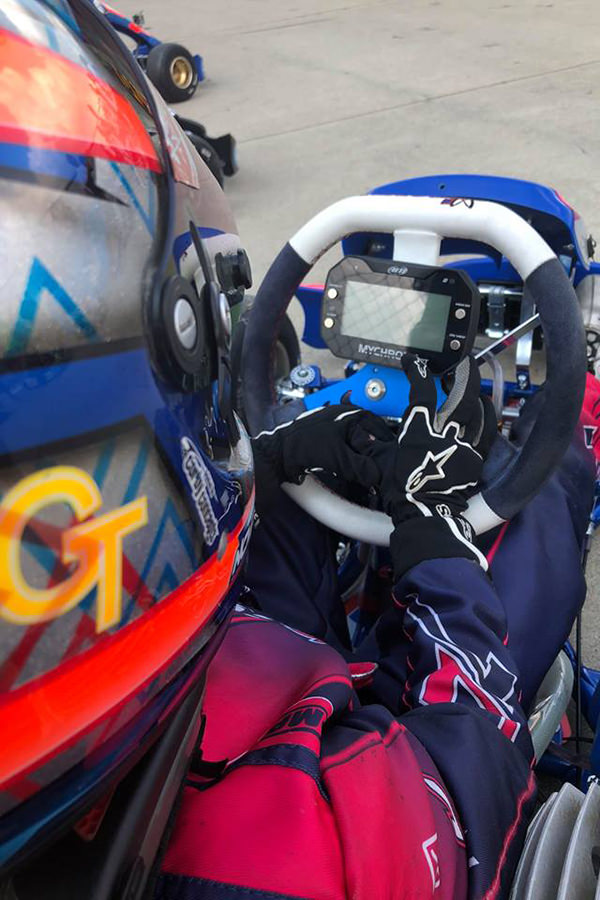 About Rolison Performance Group:
The Rolison Performance Group is a leading race team and prep shop in American karting, and is also a Rotax Service Center and a Kosmic chassis dealer. Owner Mike Rolison, known as “Roli” at the racetrack, has built a career coaching some of the best kart racers on the West Coast. Over the past decade, he has helped 100′s of drivers and mechanics improve their craft. Mike brings world class driving and coaching experience to every racer he works with. Drivers that have been part of the Rolison Performance Group team over the past few seasons have recorded a number of national victories, claiming Superkarts! USA Pro Tour and Rotax Challenge of the Americas titles. RPG provides trackside support and arrive-and-drive programs for many series, including the SKUSA Winter Series, SKUSA Pro Tour, US Open, Can-Am Karting Challenge, California ProKart Challenge and the SKUSA SuperNationals. The team is a Kosmic chassis and product line dealer and is proud to campaign karts on the regional and national stage.