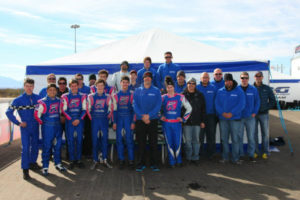 NEWBERG, OREGON (January 16, 2013) – Success in any form takes hard work, commitment, knowledge and determination. That is the foundation of the Rolison Performance Group, instilled by owner/operator Mike Rolison. The staff put together for the opening event of the 2013 season complimented the talent behind the wheel this past weekend. RPG secured a total of five victories and nine podium visits at the Musselman Honda Circuit in Tucson, Arizona for the first two rounds of the Rotax Challenge of the Americas.

Rolison, a longtime racer within the Rotax Max Challenge, is confident in the program he has put in place for the new season, coming off two United States Rotax Grand Nationals titles. His many hours with the Rotax engine provide a strong foundation when drivers hit the track powered by RPG-serviced motors. Overall, the backbone is experience, and the staff that was trackside in Tucson brought in well over 100 years of karting. 2012 DD2 Grand Nationals champion Joey Wimsett was one of the key factors to the success of RPG on and off the track last season. His work as a driver coach, in addition to his achievements as a driver, helped propel the operation last season. Utah’s Mike Beeny was an essential part to the program, and has returned in 2013. New for this year is Wesley Boswell, the 2003 SKUSA SuperNationals SuperPro winner. A journeyman in the sport, Boswell has a diverse resume with driver coaching and tuning experience, and was a key factor to the success of Rolison Performance Group this past weekend. 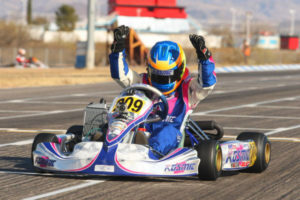 Five victories were garnered in Tucson by the Rolison Performance Group roster. The RPG duo of Luke Selliken and Blaine Rocha swept the Junior Max division while Parker McKean and Phillip Arscott scored dominant victories in Senior Max – all aboard RPG prepared Kosmic chassis. Selliken, the vice-champion in the series from a year ago, battled back from a seized engine in warm-up on Saturday. After qualifying fifth, he drove to victory in the Prefinal and Final. Rocha duplicated the same feat, coming from fourth in qualifying to winning the Prefinal and Final. Selliken made it a RPG 1-2 finish by placing second and placing himself at the top of the championship standings. 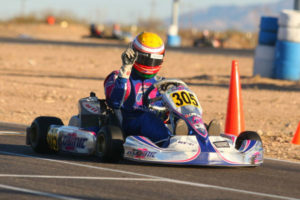 Parker McKean began where he left off at The Challenge in 2012, winning in the Senior Max category (Photo: Sean Buur – Go Racing Magazine)

McKean, a winner at the series finale last year, started off the year atop the podium. Running inside the top-three in round one, McKean took advantage of an opening lap incident to secure the lead and score his first of 2013 by over six seconds. Arscott, involved in the first corner wreck, was the quickest driver all weekend. He charged back from 32nd to 10th in Saturday’s main event while earning fast lap honors. Then Sunday swept the day’s proceedings, aside from McKean taking the fast lap of the race with his own charge from the back. 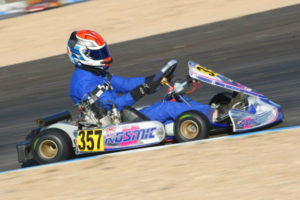 The fifth win came via Mini Max driver Sting Ray Robb, who triumphed in the round two main event on Sunday. After qualifying on the pole position, he led the Prefinal until the engine mysteriously shut off, dropping him to fifth in the order. He fought his way back to the second position, setting up for the run at the victory in the Final where he won by two tenths. The win placed him in the series point lead thanks to the runner-up finish the day before.

Justin Peck and Andrew Evans provided the team with its four other podium finishes on the weekend. Peck was able to earn hardware in the Masters Max division both days, placing third on Saturday with a runner-up finish on Sunday. Evans joined RPG late in 2012, gaining quick results in his first event with the operation. Returning in his debut aboard the DD2 package, Evans learned all weekend long from the entire RPG group to garner second place in both main events. McKay Snow rounded out the Junior Max contingent in Tucson for RPG, running inside the top-10 all weekend long. He ended up placing ninth and 11th on the weekend in the main events. Regional racers Hailey Groff and Izak Hayda got their first taste of international racing in the competitive Senior Max category, leaving with more knowledge and experience thanks to the RPG staff.

Rolison Performance Group is traveling east this weekend, contesting the opening round of the Florida Winter Tour Rotax Max Challenge in West Palm Beach. For more information on all the products and services that the Rolison Performance Group has to offer, visit www.rolisonperformancegroup.com .  RPG has arrive-and-drive opportunities for the entire Challenge of the Americas and Florida Winter Tour events, as well as the 2013 SKUSA Pro Tour schedule this summer. Anyone interested in being part of this winning program should contact Mike Rolison via e-mail at roli5000@hotmail.com.