NEWBERG, OREGON (February 27, 2014) – The Rolison Performance Group helped to guide a number of its drivers to terrific performances at the latest stop of the Rotax Challenge of the Americas. Held at the Phoenix Kart Racing Association (PKRA) facility in Glendale, Arizona over the February 21-23 weekend, the series provided some of the toughest competition seen along the west coast in the third and fourth rounds of the championship program. The RPG contingent put in strong performances across the board in several classes. Junior driver Austin Versteeg and Senior veteran Phillip Arscott each scored victories under the RPG tent in Phoenix, while the rest of the team continued to show gains and improvements from the opening weekend last month in Tucson. 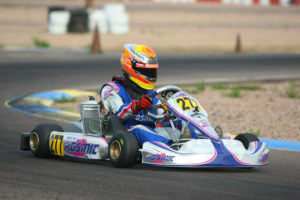 Utah driver recorded a clean sweep of the first day’s action in Junior Max aboard his RPG Kosmic entry. Earning the pole position by a comfortable three tenths of a second, Versteeg would leave no question that he was chasing a championship. The heat race saw Versteeg put his head down and pulled away to a three-second win, which would secure him the pole position for the Final. Austin put on a clinic during Saturday’s main event where he once again checked out on the rest of the Junior field. Tying together a string of consistent laps, including the fastest lap time of the race while taking the white flag, no one had anything for Austin. The checkers flew with Versteeg a whopping six seconds ahead of second place. Sunday was another very impressive day for Versteeg as he ran top-five all day. After moving up from a fourth place starting spot to win the Prefinal, Austin recovered from a late race spin after contact to earn a fifth place finish in Sunday’s main event to keep himself in the title chase. 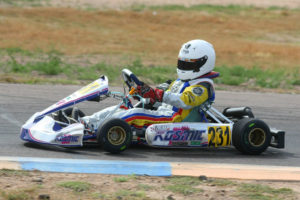 Joining Austin in Junior Max were Jeff Fulham, Kyle Wick, Dhyllan Skiba and David Rafailov joining the team for the first time in 2014. Fulham ran in the top-20 on Saturday but it was Sunday’s performance that will be remembered. Sitting in the top-10 for qualifying on Sunday, he drove up to third in the Prefinal, improving to the runner-up position for his first ever podium finish at the Challenge. Wick had a great weekend in Phoenix, backing up his podium finish in Tucson. After a top-10 day on Saturday, Wick and the RPG team found more speed hidden in his Kosmic chassis. Sunday began with Wick qualifying less than two tenths of a second off the pole position as Kyle drove to back-to-back fourth place finishes in the Prefinal and Final.

Rafailov made his 2014 season debut and fought strong all weekend long. Contact dropped the Colorado driver to the tail of the 29-driver field in Saturday’s main event, but David never gave up and piloted his RPG Kosmic to the 13th position at the checkered flag. The Junior rookie fought his way into the top-10 in Sunday’s feature race, only to have another driver make contact which resulted in a DNF. The future looks promising for the relationship between Rafailov and RPG. Dhyllan Skiba continued to learn and work with his RPG team as he finished 28th and 27th respectively over the two days of racing. 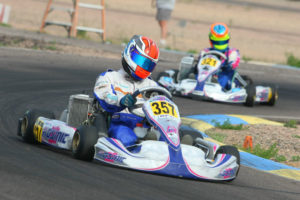 Former US Rotax Grand Nationals and 2013 Challenge champion Phillip Arscott came into the weekend leading the championship, and left Phoenix as the driver to beat heading to the season finale in April. Arscott kept his RPG Kosmic in the top three Saturday, and then proceeded to sweep Sunday’s action. Arscott looked terrific in qualifying in round three as he just narrowly missed out on winning the pole position by 32 thousandths of a second. Arscott drove third in the Prefinal and then recorded his third straight runner-up finish in the Final. Sunday belonged to Arscott, as the RPG driver made a clean sweep of the day driving to an impressive seven-second victory. Earning the fast time in the main event, along with top qualifier honors, it was a maximum point day for Phillip as he leads the title chase going into Sonoma.

Senior rookie Blaine Rocha improved on his top-five performance in Tucson, battling for the podium. Running in the top-five all day on Saturday, Rocha crossed the stripe third in the main event, but was penalized one position for blocking. The following day, he qualified 15th which put him in the middle of the grid. Blaine was then caught up in a wreck on the opening lap of the Prefinal and was forced to start from the tail of the field. Great decisions and a fast RPG Kosmic, Rocha fought his way up to eighth in the main event. Fellow rookies Luke Selliken and McKay Snow fought all weekend to break into the top-10. Selliken – the 2013 eKartingNews.com US Rotax Driver Rankings #1 driver in Junior Max – recorded a pair of top-15 finishes. Snow finished 15th on Saturday and was on his way to a top-10 Sunday until the rear bumper was dislodged by another competitor, and was forced to pull off. Moving forward, the goal at the series finale in Sonoma is to place all four drivers inside the top-10 in each main event.

Tait Blum and Josh Pierson both had strong weekends in Micro Max, as they continue to learn from the knowledgeable crew under the Rolison tent. Blum went from 17th in qualifying to 11th in the final at the end of the day. Pierson was a provisional top-five finish, but had his result taken away for a throttle issue in tech inspection. He bounced back the next day to sit fourth in qualifying, dropping back to sixth however in the Prefinal. Looking for his first top-five finish of the year, Josh spun early on in the main event. Able to continue on, he placed 14th. Blum qualified 14th for Sunday’s round, and ended the day in the same position after some great racing throughout the day for the young driver.

Masters Max driver Justin Peck returned to the PKRA facility, site of his first Challenge victory last year. Peck began the weekend fourth in qualifying for round three, moving his way into the top-three during the Prefinal. The Tony Kart driver continued his run near the front, driving to the third place finish for his first podium of the season. Peck improved to third in qualifying on Sunday, battling to stay within the top-five during the heat race. His chance for a second podium finish went away at the start of the final, as Peck was involved in an opening corner wreck. He muscled on, climbing back to a sixth place finish.

Connor Wick represented RPG very well at the opening weekend of the Challenge in Tucson back in January, and he did the same fine job in Phoenix. Wick ran top-10 in Saturday’s Prefinal but an incident dropped him to the tail of the field in the feature, recovering to finish 11th. Wick gained speed and positions on Sunday, qualifying eighth and improving to sixth place in the prefinal. Wick fought strong in the main event, placing seventh for his third top-10 finish of the season.

Next on the schedule for the RPG operation is a return east for the final rounds of the Florida Winter Tour, set for March 20-23 at the Orlando Kart Center, with championships on the line. A weekend off gives the operation a brief break before traveling to the Simraceway Performance Karting Center in Sonoma, California on April 4-6 to contest the final rounds of the Rotax Challenge of the Americas, as two championships sit in the reach of two RPG drivers.

Rolison Performance Group is taking requests for Arrive-and-Drive programs or transportation opportunities at the final Florida Winter Tour and Rotax Challenge of the Americas events – along with planning for the Superkarts! USA Pro Tour and Can-Am Karting Challenge that begins in April. For more information on all the services that the Rolison Performance Group has to offer, visit www.rolisonperformancegroup.com or find them on Facebook.