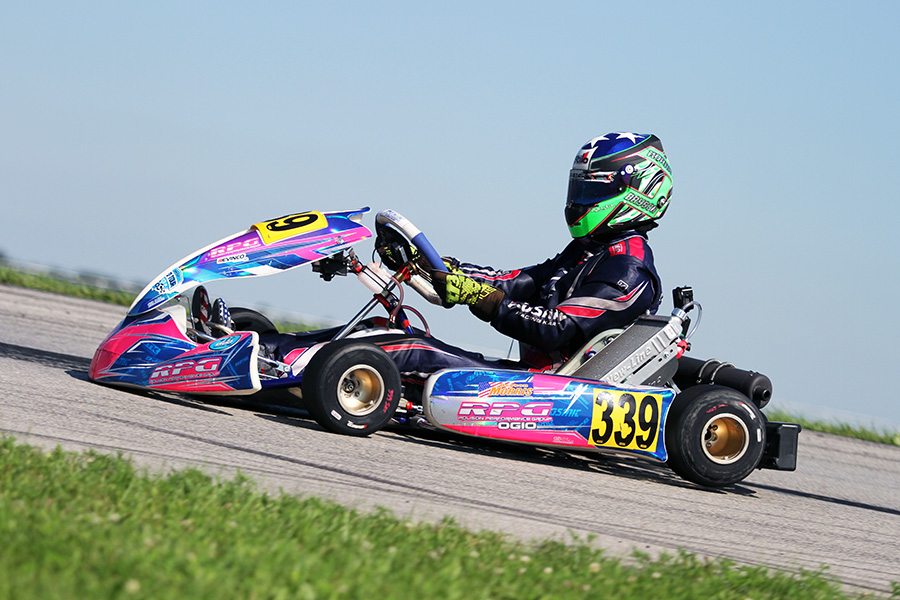 The Rolison Performance Group has called the New Castle Motorsports Park home for the last month, beginning with the team’s debut at the United States Pro Kart Series and wrapping up with a two-weekend event at the track to complete the Superkarts! USA Pro Tour. The opening weekend of SKUSA’s ‘Summer Festival’ at the New Castle, Indiana facility took place on August 6-9, as the team took part in the three rounds of competition on the ‘Super Mile’ layout that tested both man and machine. The entire crew under the RPG tent, each driver, and their OTK chassis, were up to the challenge, earning victories in three class categories – 100cc, X30 and shifterkart – on the weekend with RPG’s in-house AVP engine program.

Leading the way with four victories in six main events was Senior rookie Bryson Morris. The driver from Tennessee was doing double duty on the weekend, competing in both X30 Senior and KA100 Senior aboard a Kosmic chassis with AVP power. Morris notched his first Senior victory in SKUSA Pro Tour competition in Round One with an impressive win in X30 Senior. Round 2 saw Morris drive to the win in KA100. The final day of competition was a sweep in both main events, bringing his total to four wins on the weekend. In total, Morris recorded five podium results for RPG and OTK with a ‘low’ finish of fourth place in X30 Senior on Saturday.

Four-time SKUSA Pro Tour champion Ryan Norberg began his ‘Drive for Five’ with two podium finishes in X30 Senior. The Florida driver landed in fourth for Round One before standing third in the other two main events on the weekend. His best performance was in Round Three, leading the majority of the race until he was shuffled back to third on the final circuit. Morris and Norberg were among the more consistent drivers on the weekend, thereby giving two RPG drivers in the fight for the X30 championship. Fellow RPG drivers Hannah Greenemeier, Jacob Gulick, Jonathon Portz, Jace Denmark-Gessel, and Branyon Tiner all earned at least one top-10 finish over the three rounds. Greenemeier added a Prefinal win to her credit in Round Three.

Josh Pierson finished the 2019 SKUSA Pro Tour in third in the X30 Junior championship and elected to move up to the Pro Shifter 2 division in 2020. Pierson showed speed out of the trailer aboard his Kosmic chassis. Josh qualified second in class for his first official competition session and was able to speed his way to the front in the Prefinal. Leading the early laps of the Final, an engine failure sadly put him on the sidelines. Pierson battled back in Round Two, finishing third for his first podium in the category. On Sunday for Round Three, Pierson took full advantage of how the races transpired. After qualifying fourth, Pierson put himself into the lead at the end of the Prefinal. From there, Josh led all 16 laps of the Final to claim his first victory in Pro Shifter 2.

Defending SKUSA Pro Shifter champion Kyle Wick battled against a strong field aboard his RPG Tony Kart, which included four former series champions. Wick had top-five speed all weekend long. Contact in the Final passing for the lead on the final circuit took a possible victory away in the opening round, dropping him to seventh at the line. Wick bounced back to finish fifth in Round Two and improved to fourth in Round Three to keep his title hopes alive.

Justin Peck rounded out the RPG shifterkart lineup, competing in the G2 division. The SKUSA Winter Series champion recorded three podium results on the weekend, placing third in Round One before earning runner-up finishes on Saturday and Sunday.

Joining Morris in the KA100 Senior class were Caleb Shrader, Dylan Peck, Gia Cicero and Nate Cicero. The latter Cicero, the reigning SKUSA Winter Series champion, drove to three top-10 performances on the weekend aboard his Kosmic chassis with AVP power. The highlight finish was runner-up to Morris in Round Two for a 1-2 RPG result on Saturday. The other three drivers battled hard all weekend long to be within the top-15 of the 34-driver field.

The Rolison Performance Group operation returns trackside to the New Castle Motorsports Park on August 13-16 for Rounds Four, Five and Six of the Superkarts! USA Pro Tour Summer Festival. Championships will be decided in the final three rounds in New Castle, Indiana.