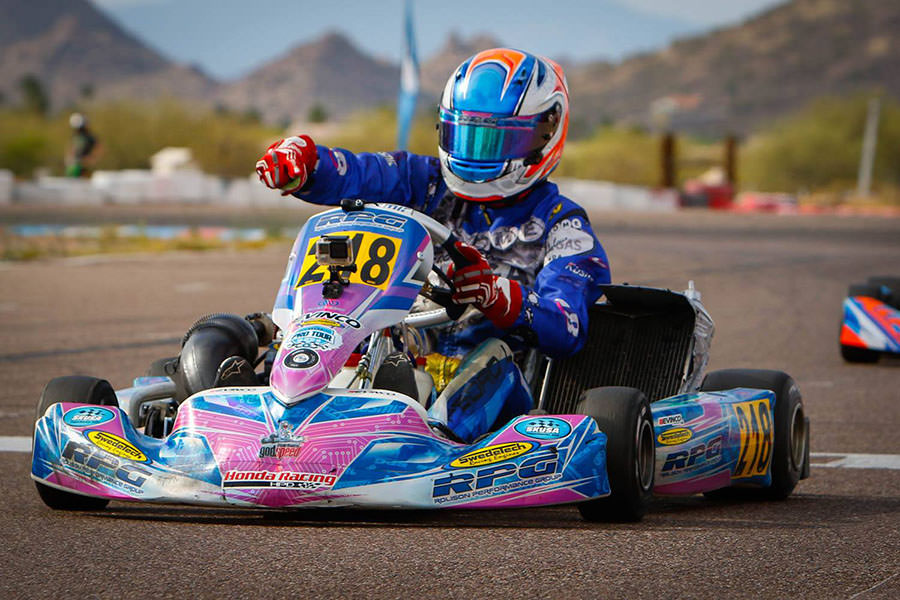 Pedro Lopes made it four-for-four in the S2 Semi-Pro division at the SKUSA Pro Tour (Photo: On Track Promotions – otp.ca)

The Rolison Performance Group is engaged into a very successful 2018 season. From the beginning weekends at the SKUSA Winter Series in Florida, to the first events of the California ProKart Challenge in California, RPG has developed their drivers into championship contenders for 2018. The RPG team left the Superkarts! USA Pro Tour WinterNationals in March with a triumphant weekend to begin the major championship chase. The bar was raised this weekend at the Phoenix Kart Racing Association during the ninth annual SKUSA Pro Tour SpringNationals. Rolison Performance Group recorded a total of nine podium finishes, including four victories in the Stock Honda and IAME categories.

“It was just an amazing event for our team,” stated Mike Rolison of Rolison Performance Group. “The team test in April back at our home track and conducting a weekend of testing at PKRA prior to the SpringNationals really gave our drivers the knowledge they needed to perform well. From just becoming more familiar with the circuit, to understanding how the track changes with the weather conditions, it was a true team effort put in by everyone.” 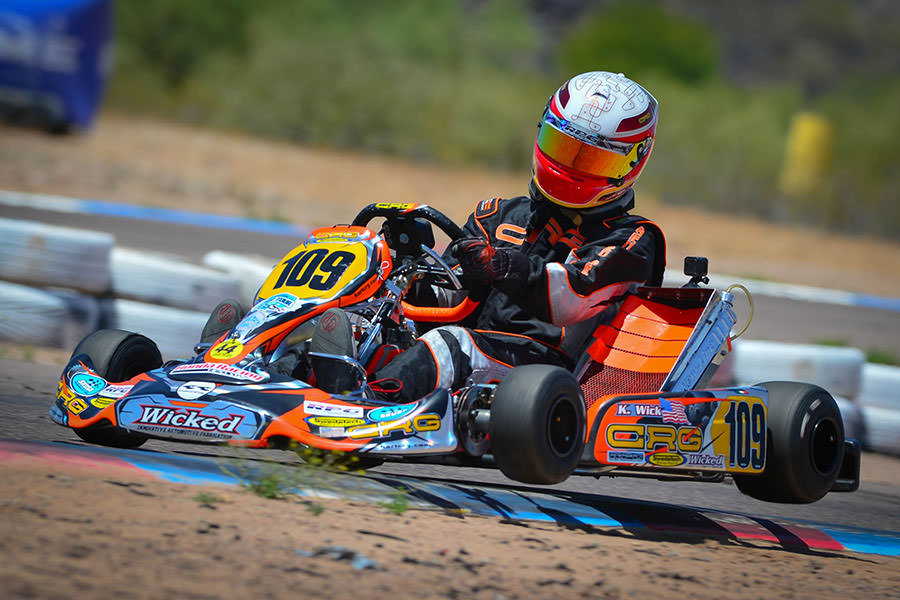 Doubling up his win total at the SKUSA Pro Tour was Brazilian Pedro Lopes. The 15-year-old made his debut in the S2 Semi-Pro Stock Honda division this winter, going on to win both main events at the WinterNationals and duplicated the feat at the SpringNationals. Lopes earned maximum points on Saturday, sweeping the day along with earning fast lap honors in the Final en route to a near six-second advantage. Sunday was a battle, losing out for fast time in qualifying and coming back to win the Prefinal. Dropping to third at the start of the Final, Lopes spent nearly the entire 25-lap battle trying to reclaim the top spot. A last lap pass secured the lead and the fourth victory for Lopes aboard his RPG-prepared Kosmic.

In the same race group was S1 Pro Stock Honda rookie Kyle Wick. A winner at the SpringNationals last year in S2, Wick was among the quickest all weekend in his RPG-prepared CRG. Saturday was perfect for Wick, running unchallenged all day to sweep the round and earn his first S1 victory. The win was by over three-seconds thanks to his consistent lap times in the 25-lap main event. Wick was in the top-three all day on Sunday, placing third in qualifying and moving up to second in the Prefinal. He would end the day on the third step of the podium to complete the best weekend of his career.

Entering the weekend, X30 Master driver Paulo Lopes was the SKUSA Pro Tour leader thanks to his two podium finishes at the WinterNationals. The weekend in Phoenix for the SpringNats helped to extend that championship lead with his best event thus far. Lopes put himself near the front of the field throughout the day on Saturday, buying his time to strike. With a few laps remaining in the main event, the Brazilian took over the lead and held on for the victory, his first at the SKUSA Pro Tour. Sunday was another strong day at the front, placing second in all on-track sessions. His results gave him four straight podium finishes to begin the SKUSA Pro Tour championship chase, putting Lopes as the driver to beat at the SummerNationals. 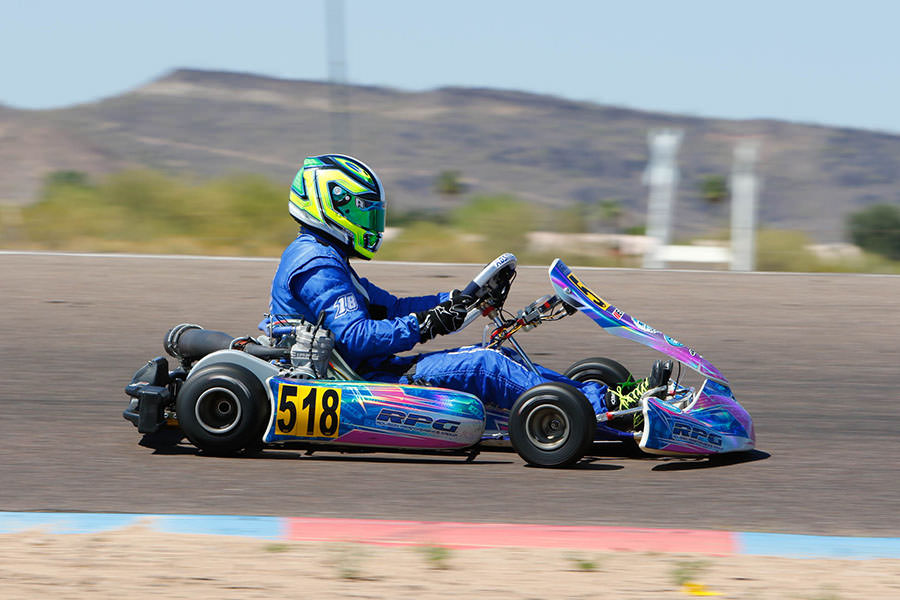 Four drivers under the RPG tent competed in the headline X30 Senior division, with all four running inside the top-15 all weekend. Canadian Samuel Lupien recorded the best result of the weekend with a third-place finish on Saturday, his second podium result of the championship. Close behind was Senior rookie Hannah Greenemeier. ‘Hurricane Hannah’ fought back from a rough start in the Final to finish sixth, matching her two finishes in NOLA. Jacob Gulick was one spot behind in seventh for his best result on the season. Also recording her best weekend of the year was Emma Delattre. The driver from Connecticut kept her machine out of trouble all weekend long and matched the pace set by her RPG/Kosmci teammates with finishes of 14 and 15th. Greenemeier, Lupien and Gulick each recorded a DNF on Sunday due to contact.

Adding to the podium results were Cameron Egger and Victor Jimenez. Egger landed his third straight podium finish of the season in the S2 Semi-Pro Stock Honda category with a third-place result on Saturday. A possible win was taken away on Sunday with contact. SKUSA Winter Series winner Victor Jimenez placed inside the top-five of the S4 Super Master Stock Honda category each day. Jimenez grabbed his first SKUSA Pro Tour podium on Saturday with a third-place result, ending the weekend fifth on Sunday. 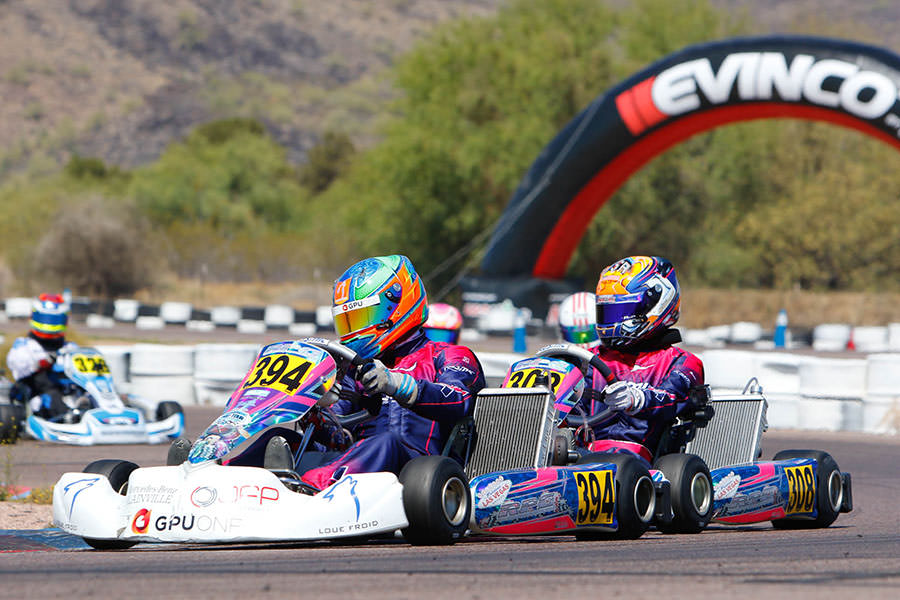 Samuel Lupien and Hannah Greenemeier led the way for RPG in the X30 Senior category at the SpringNationals (Photo: On Track Promotions – otp.ca)

The three RPG X30 Junior drivers had the speed to be inside the top-15 all weekend long. Both Josh Pierson and Branyon Tiner bounced back from tough finishes on Saturday to work their way into the top-10. Pierson ran eighth with Tiner placing ninth, earning their best results of the year. Brazilian Pedro Aizza joined RPG for the first time on the year, making his SKUSA Pro Tour debut. Aizza improved 29 positions in Saturday’s main event to finish 12th, earning the hard charger award. Pedro was running top-15 on Sunday when a mechanical issue sidelined him in the main event.

Rolison added, “I would like to send a special thank you to Kosmic Kart and OTK Kart Group, along with all our drivers, tuners, coaches and family members under the RPG tent for their hard work and effort during a very hot and grueling race weekend. I can’t wait for the next race!”

Rolison Performance Group is preparing for a busy summer of racing, including the final step of the Superkarts! USA Pro Tour on August 10-12 at the New Castle Motorsports Park in New Castle, Indiana. Up next is the third round of the California ProKart Challenge at the CalSpeed Karting Center in Fontana, California on June 1-2. Head over to RolisonPerformanceGroup.com for more information on becoming part of the RPG operation, and follow their success on Facebook, Twitterand Instagram.