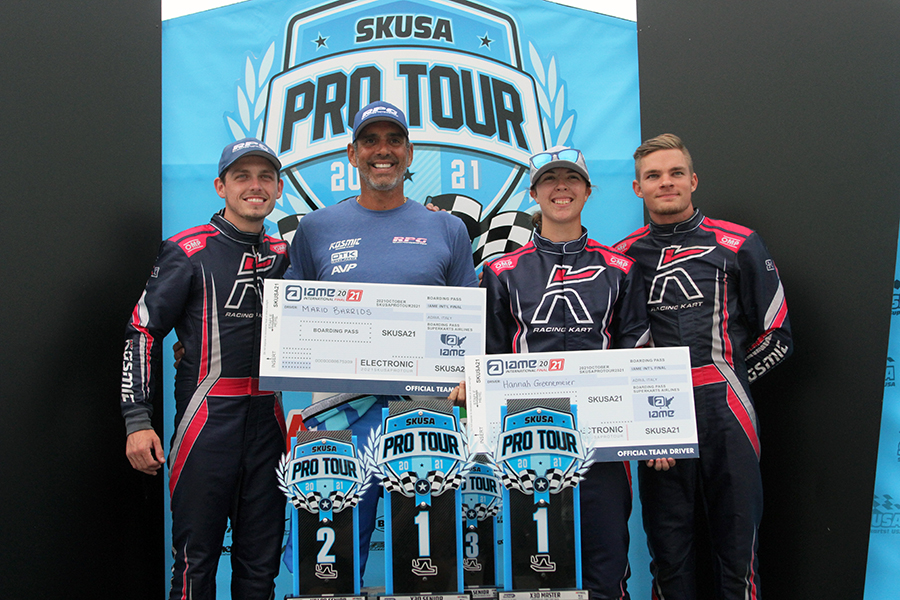 The Rolison Performance Group hit the final event of the 2021 Superkarts! USA Pro Tour with the SKUSA SummerNationals at the New Castle Motorsports Park over the August 13-15 weekend. Team RPG put in the homework and went the extra mile on the ‘Super Mile’ course at the New Castle, Indiana facility, calling it home for a full week leading up to the fifth and sixth rounds of the championship program. The Kosmic / OTK USA race team fielded 17 drivers on the weekend in five divisions, claiming five victories, eight podiums, and closing out the series with two championships. 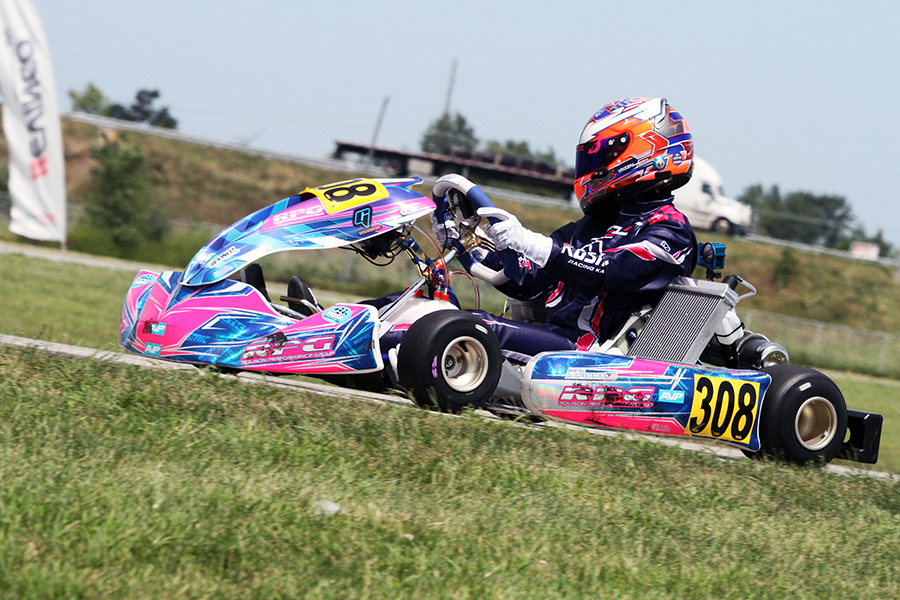 For a third straight season, Rolison Performance Group secured the SKUSA Pro Tour X30 Senior title with a third different driver. Hannah Greenemeier was able to accumulate enough points over the final two rounds to move up into the top position of the championship standings, becoming only the second female SKUSA Pro Tour champion in the 12-year history of the program. Greenemeier placed seventh and third on the weekend to add to her SpringNationals victory and two other top-five finishes to close out as the title winner. Nate Cicero led an RPG victory sweep on the weekend, earning his first SKUSA Pro Tour triumph on Saturday. He was in line to attempt a double until an opening lap wreck took him out of the Final. Four-time champ, including 2019 with RPG, Ryan Norberg completed the sweep as he drove away to the victory on Sunday, his second of the season. It was a great bounce back from a rough DNF on Saturday, costing him any chance at a bid for a fifth title. Branyon Tiner came into the weekend leading in the standings and drove to fifth in Round Five to remain the point leader. A DNF in the Prefinal for Round Six cost him valuable points, and while he made a valiant effort to climb up to nearly inside the top-five, contact hurt his Final result as he fell to 13th on the final lap. In total, RPG drivers finished 1-2-3 in the championship, earning four of the six victories on the season. 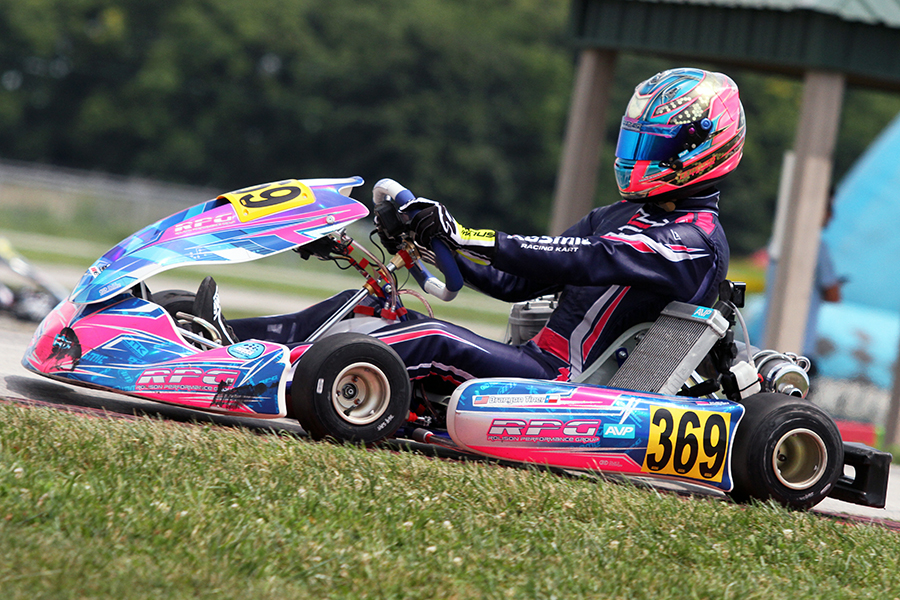 Branyon Tiner fought strong to the end, finishing the season as vice-champion in the X30 Senior division (Photo: eKartingNews.com)

The second title on the 2021 SKUSA Pro Tour came from X30 Master driver Mario Barrios. A string of three podium finishes in the first four rounds helped to put Barrios in position to battle for the title at the SummerNationals. Barrios went to work in Round Five, sweeping the round and earning maximum points on the day with a photo finish victory. He repeated the same effort on Sunday, completing the perfect weekend to move him to the top of the championship standings to claim his first SKUSA Pro Tour crown.

“I am really proud of our X30 drivers for their performances at the SKUSA Pro Tour,” stated Rolison Performance Group owner Mike Rolison. “Each of them performed and put in 100% throughout the weekend. I was extremely excited to see Nate gain that first big victory and Ryan return to the top of the podium. Biggs never quit, and that’s something you cannot teach, and it is so great to have him part of RPG. Congrats to Hannah and Mario on their championships, but it was not without the hard work and effort of the entire team and of course the amazing engine performance of AVP with Alex Vincent under our tent.” 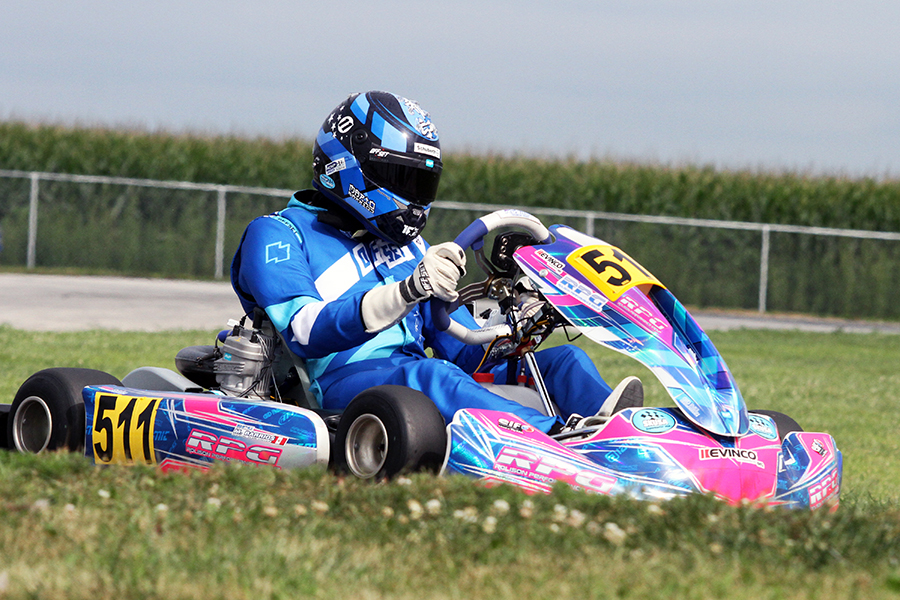 It was nearly two victories on the weekend for RPG driver coach Austin Garrison, who made a one-off run in the KA100 Senior division on the weekend. Garrison was able to drive away with a solid victory, his first in the class, on Saturday. Sunday was a battle until the end, with Garrison making an over-under move to go from third to nearly first after a drag race to the checkered flag. It was a true photo finish, with the timing loop calling Garrison the winner while the video review had him losing by just a few inches. Nolan Allison completed the run in the championship with a third-place result in the final standings. Finishes of 11th and fourth helped put him on the championship podium. Gia Cicero was hanging around the top-20 area all weekend, placing 25th and 19th. Charlie Murphy finished 27th on Saturday but recorded a DNF, as did Grace Hemmerde who was unable to finish both main events.

Micro Swift driver Augustus Toniolo came one position short on the final lap of the SKUSA Pro Tour championship of the class title. Toniolo entered the weekend leading in the championship chase based on four top-five finishes and without a victory. He was in the fight all weekend long for wins, and ended up fourth on Saturday. Fighting with the championship rival in Sunday’s final, Toniolo finished one position behind in fifth, which was the deciding factor in the final point standings. Overall, it was six straight top-five finishes on the year for Toniolo in his vice-champion effort. Jackson Gibson continued his hot streak, earning his first SKUSA Pro Tour podium finish with a third-place performance. He followed that up with a sixth-place result on Sunday in Round Six. Lillian Scarbrough recorded her best finishes of the SKUSA Pro Tour at the SummerNationals, placing 14th and 17th. 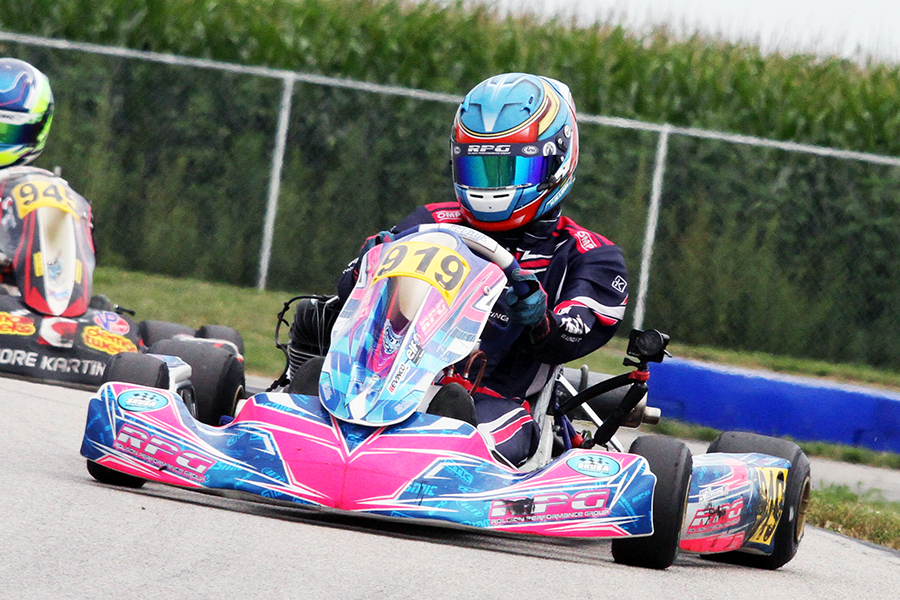 Chase Hand put in a courageous fight in the KA100 Junior division on the weekend, coming into the SummerNationals with a slight chance at a top-three finish in the standings. A DNF in the Prefinal forced him to drive forward in the Final on Saturday, climbing up 28 spots to fifth with fast laps of the race. He matched that with a sixth place to end up sixth in the final point standings. Graham Trammell did not have his best results of the year but did improve from 16th on Saturday to eighth on Sunday. Stephen Eisert joined RPG for the weekend, making his first start on the SKUSA Pro Tour in 2021. Eisert drove to a solid 12th on Saturday and was shuffled back after racing inside the top-10 Sunday to end up 30th. Emma Kate Scarbrough put in her best performance of 2021 with finishes of 19th and 21st on the weekend.

“We have really been able to develop our 100cc program at both the Junior and Senior level this year thanks to our great driver coaches and mechanics,” added Rolison. “Austin’s run at New Castle and Nolan’s performance across the season shows that in Senior with Chase in Junior once again there in the end as a contender in only his first season at this level. Thank you again to Comet Racing Engines for their engine program in the KA100 all season long. Augustus gave it all he had in Micro. It’s just sometimes how racing goes. Now we start working harder so we don’t put ourselves in those positions anymore.” 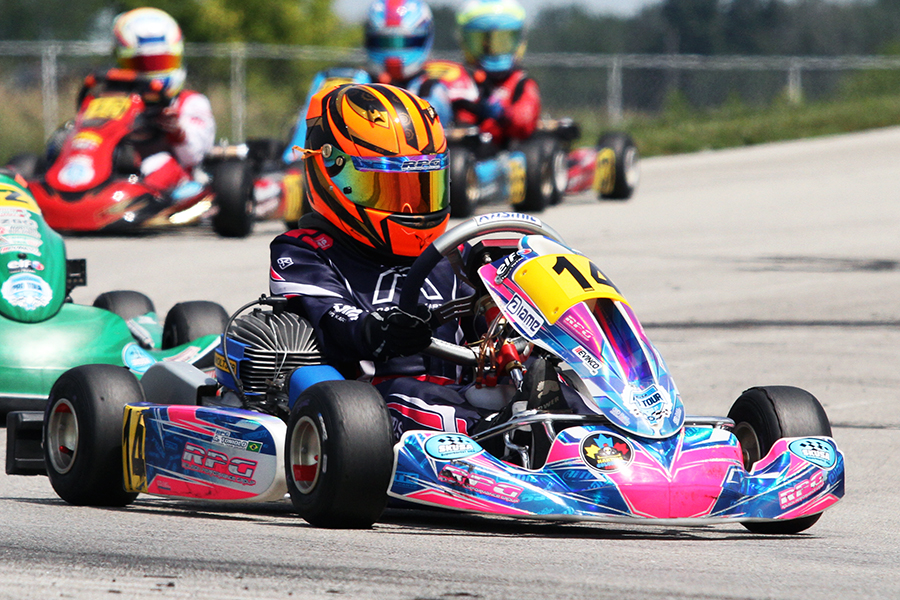 The Rolison Performance Group operation has travelled west back home to regroup for the fourth quarter of the 2021 season. The team is scheduled to hit the Sonoma Raceway for the ROK Sonoma event on September 11-12 along with the ROK Fest West on September 16-19. Then it will be the final run east to the GoPro Motorplex in Mooresville, North Carolina for the United States Pro Kart Series finale on October 15-17. RPG is also taking final spots for the ROK Vegas event on November 3-7 and the SKUSA SuperNationals 24 on December 1-5, both in Las Vegas.